IT’S been two years since Cuchulainns competed in the Armagh County final but for experienced campaigner Ciaran Clifford it’s been a little while longer.

Back in 2020, Clifford was close contact to a Covid case and had to sit the final out as his side lost out to Middletown, so the former Armagh defender is aiming to make his first appearance in the decider since 2016 as they take on Keady this Sunday.

“I missed that one due to being a close contact. It was strange sitting at home watching the match online but with no injuries and no sickness, feeling absolutely one hundred per cent and it was very strange,” said Clifford.

“I know both teams will want to get to the final but if we play well and take our chances, I don’t see any reason why it won’t be us.”

It’s knockout time now in the Senior Hurling Championship and the city side are coming up against a Keady team they have already beaten once in the competition, during the round-robin group games.

That high-scoring round three clash went down to the wire with Cuchulainns just edging through to win 1-24 to 2-20.

“We beat them in the group section and our first two games of the championship we were beat while Keady won their first two games, so we were heading into that game knowing if we didn’t win then we were out.

“There was a lot of pressure on us that night and we were definitely very focused, I’m not sure if Keady had that same focus, there wasn’t the same pressure on them in terms of needing a result.

“But on the night both teams went at it, and it was one of the best games of hurling I’ve played in in Armagh. It was just one of those nights everything went well for both teams and there was very little in it.”

The round-robin group games were introduced to the Armagh Hurling Championship this season and Clifford, who retired from inter-county duty at the beginning of the year, believes they have been a resounding success.

“It’s something that probably should have been brought in a couple of years ago.

“I know most other counties in Ulster have reverted to round-robins so when Armagh brought it in this year it was a brilliant move,” said Clifford.

“The way the round-robin actually worked out, going into the last round of games there were things to play for at both ends of the group. It gave teams four games in the championship, and it provided a bit of excitement right down to the last set of games.

“We were able to regroup, we got back at it and okay Middletown beat us in the second round so we were definitely thankful for the round-robin.” 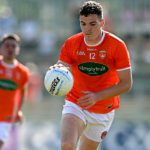