NINE years ago, Ciara Brown was in the stand at Croke Park, hanging over the front row watching in awe as she watched Antrim play in the 2012 All-Ireland final.

It is one of the St Paul’s player’s favourite memories. She recalls how excited she was that day as she watched her county win the All-Ireland final, 3-9 to 0-7 against Louth. She also can’t believe that now she is in a position where she is going to run out at Croke Park in an All-Ireland final herself as the Saffrons prepare to take on Wicklow.

“This is a dream come true. From no age it’s all I have wanted to do. From no age I have supported Antrim every year that they have been in Croke Park. To be there now it is absolutely amazing. I can remember being there in 2012, with my Antrim jersey and headband, in the front row, swinging my flag. For me to be there now is amazing.”

Last weekend Antrim beat Carlow 3-22 to 3-18 in the semi-final to allow Brown the chance to reach the final, though they needed extra-time to do so.

“I loved it. I loved that it was point for point. It was so intense and everyone gave it their all. No one slacked off. The last minute of normal time, when Carlow got a free kick, it was a draw at that point. I thought the score was go over. I was so glad when it went wide.”

Antrim went on to win the game in extra-time. Brown says that the management has been important. Emma Kelly and Kyla Trainor took over this year and have got a response from their team.

“They have experience of being in our shoes. They know how to keep the training enjoyable. They are able to adjust the training to our needs. They listen to our ideas and they will incorporate them in.”

And the team have put in the work.

“We are really close as a team. We are willing to put our head on the line for each other. It is not about individuals. Maybe before people would have taken on things for themselves, or tried to take the glory. But this year everybody is for each other.

“We have put in some much work this year, and I genuinely believe that we deserve it this year. Everyone has been unreal and giving 100 per cent at every training.

“Other years there would be players who would come in and out. But from the very first day of trials every single person has had their head clued in. Everyone has been happy to get stuck in.” 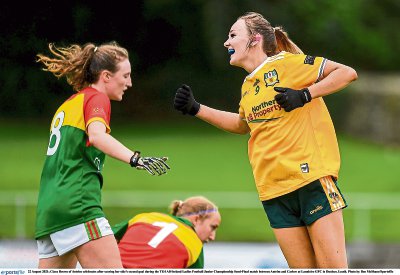