CAVAN Ladies are looking forward to the challenge of taking on Donegal as part of Sunday’s Ulster championship double header at Clones insists manager Gerry Moane.

The former Tyrone manager is now in his second season with Cavan and feels the county has so much to offer if they can bridge the gap from underage.

The game was put back a week to facilitate the twinning with the senior men’s semi-final between the counties.

“From the ladies’ point of view, it adds to the occasion and it should be a regular with double headers,” insists Moane.

“The game has moved on and going forward, every opportunity should be taken. The double headers should be taking place as a regular occurrence.”

With all the discussions surrounding the merger of camogie, hurling and football – men and ladies – Moane insists it’s “the way forward”, enabling families to watch their son and daughter on a regular basis.

“There is a great anticipation,” said Moane of the feeling in the Breffni camp. The decision was made early last week of the new date, allowing both camps to easily adjust their preparations.

“We are really looking forward to the challenge of Donegal, they are a very seasoned and experienced side.”

Donegal needed late goals to see off Dublin in the League semi-final and Moane highlight’s the “never say die” attitude that Maxi Curran’s side posess.

“Dublin were the better team in the second half, but Donegal proved their worth with their two goals to get over the line and get into the final.”

Donegal went down to Meath in the decider and Moane feels the Royals are an example to other teams of how they “raised the bar”. He puts their progress down to momentum, togetherness and a will to make it work.

Cavan lost by a point to Monaghan in the first game and after being hit for two Armagh goals in their second outing they needed a 3-11 to 1-12 win over Tyrone to keep them out of the relagation play-offs.

In the six weeks ahead of this weekend’s clash with Donegal, Moane has been happy with his side’s progress.

“Our preparation has gone well and it is well-documented that we were short players from last year with injuries and Ashling (Sheridan) is still in Australia,” he said.

“We have a good group of players and we are evolving. They are getting better and they are understanding what we are about,” added Moane.

“They are really looking forward, they have really worked hard and they’ll give it their best shot come Sunday.”

While it’s his second year in charge, the fractured nature makes it almost feel like his first season. From the point of view of progress in the county, Moane’s very clear of the crossroads in Cavan ladies football.

Loreto and Virginia College have annexed Ulster titles with the county u-16s and minor also showing signs of progress.

“They are competing at the top level in underage,” insists Moane. “The challenge in Cavan, and it’s always been the ongoing challenge, is about getting that talent through to senior level.

“There is a bit of work to do there yet and just because you have talent at underage doesn’t automatically mean you’ll have it at senior level… it’s a completely different dynamic.

“From the outside looking in, the talent has to be harnessed but the future is very bright.” 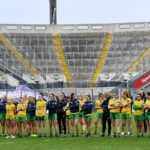