CAVAN footballer Thomas Galligan is set to miss the remainder of the senior championship after suffering a broken collarbone while playing for his club, Lacken, on Sunday past.

Lacken claimed a one-point victory over Lavey in their championship opener but that win was overshadowed by the unfortunate injury sustained by Galligan, who had to leave the fray after 15 minutes of play.

It appears likely that the 2020 All-Star won’t feature in the remainder of the championship as it usually takes six to eight weeks to fully recover, if not more.

His club have only won the Cavan senior championship once in their long history, in 1908, and last season they needed a play-off victory over Shercock to avoid dropping down to the Intermediate grade.

Elsewhere in Cavan’s opening round of senior fixtures, last year’s beaten finalists Gowna suffered a surprise defeat to Killygarry in their opener while Cavan Gaels pipped Crosserlough by a point in a reversal of their recent league final defeat. Reigning champions Ramor, meanwhile, got the better of fellow contenders Kingscourt Stars. The second round of fixtures will take place this weekend. 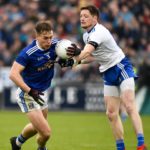 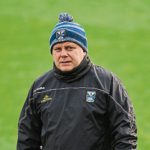