IT’S been a brilliant season so far for Cavan side Lacken, who hope to crown their 2022 campaign with an Ulster title this weekend. They take on Tyrone champions Naomh Treasa, who they also met at this stage of the competition in 2020.

“There’s great excitement around the club, the girls are really looking forward to the game,” said manager Marie Brady.

“I suppose we were in the Ulster final a couple of years ago, the 2020 final and we were beaten by a point so they’re mad to get back in an Ulster final now. There’s been a really good buzz at training since our semi-final win.”

That last four clash with Clontibret was a fairly one-sided affair, with Lacken storming into the decider off the back of a 4-15 to 1-0 victory and Brady fears that could leave them cold heading into a real challenge against Naomh Treasa.

“I suppose Clontibret were probably weaker than we expected them to be so it’s maybe a false sense of security in a way. The girls know what Naomh Treasa are like, how good they are and how hard this game is going to be. So, we’ll be focused on the game itself and ready to play.

“Winning so comfortably in the semi-final is almost a dangerous thing, it is a worry going into the game, no doubt about it. I suppose we had quite an easy run in the Intermediate Championship in Cavan as well, we won a lot of our games quite convincingly.

“It could leave the girls with a false sense of security but don’t worry, we’ll bring them back down to earth, the management team have been working hard on that.”

While Lacken have strolled to this stage of the competition, Saturday’s showdown will certainly be no walk in the park.

“We wouldn’t have known much about them until we met them in that final (2020). I would have seen them playing a couple of times since then and I saw them playing once this year as well.

“We do know they’re a really strong team and they have a few Tyrone county players on their squad as well.

“They’ll be hard stopped and their goalkeeper in particular is extremely strong, her puck-outs and all that, she’s a big asset to them.

“They have a few really good players throughout the team. Beth Jones is strong, Aine McNulty would be strong too, but I know she wasinjured for the semi-final so I’mnot sure if she’s back in action just yet.

“They definitely are a bit more road tested due to their semi-final win and the team they beat, Culloville, are a very strong team. I had seen their championship final victory, so I knew they were strong, so Naomh Treasa did really well to beat them.” 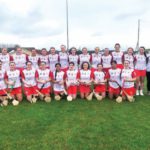 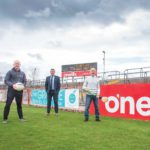