LIVERPOOL win the shootout. The chants of “blue is the colour”, the anthem of Chelsea Football Club, have been silenced at Wembley Stadium. Penalties result in a second cup final defeat of the season. Devastating they say. Heart-breaking. Crushing. But they do not know the true meaning of any of those words.

In the living room lie boots belonging to his heroes, Kai Havertz and Callum Hudson-Odoi. In the same corner is a framed Gowna GAA jersey bearing his name. It is clean, unlike any Gowna jersey he ever finished a match in in his Gaelic football career. A career as excellent as it was short.

His father Séamus shows the visitors in the room Tommy Walsh’s 2009 All-Ireland winning jersey that secured a famous four-in-a-row for Kilkenny. Among the many, many messages on his mobile phone is a personalised video from Shane Lowry, the 2019 Open winner.

Amidst all the community spirit and generosity of this homely place is that word “winner”, for this is the club where the Cavan county title was earned by Séamus, his brother Bernard and others for the very first time in 1988. Further titles followed in 1994, 1996, 1997, 1999, 2000 and 2002 when Christy entered the fray. Winners.

Séamus speaks of how football comes first in Gowna, and Colin was the epitome of that. Prior to his brain tumour diagnosis in September 2021, Colin played an underage match for Gowna GAA where he could see two pairs of goalposts at either end. That same day he kicked 1-5.

Then there was the charisma, where on another occasion having torn a team apart, the opposition satisfied themselves with the referee’s claim that the match had ended in a draw. Colin disagreed. “Not only are yous no good at football, yous can’t count either.”

On Monday morning, the O’Reilly family shuffle out and the Madden family slide in. The room is in silence. This is goodbye. There are lipstick stains on his forehead, covered partly with a head of mighty, curly hair. Then the stories begin, and so too the tears. His uncle Gabriel stands nearest. “No points for you Colin, only goals would do”. He speaks to a winner, on and off the pitch.

The time comes for Séamus, his loving mother Angela, and his big brother Caoláin to be left alone. The crowd assemble outside, each and every soul decorated with a touch of blue for Colin’s beloved Chelsea. The rain begins to spit, and the umbrellas are put up and down and back up again as a heavy shower threatens. Angela says some prayers outside the front door. 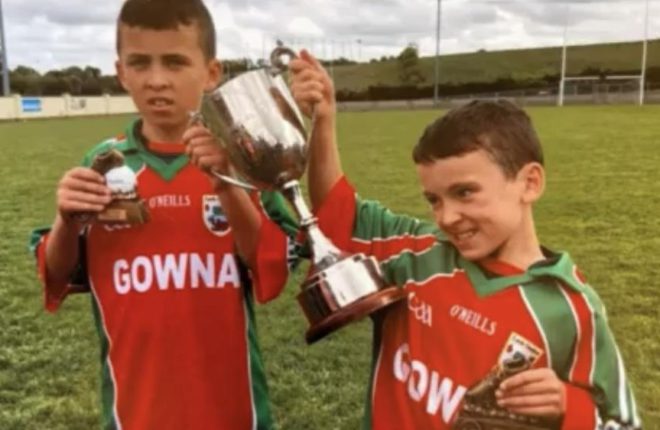 T.P Smith stands with the crowd before he is beckoned to join Colin in the hearse for the journey to the church. Biology would tell you he is no relation, but for Colin, his granny Irene and all the Maddens, he has always been so much more than a next-door neighbour. He takes a seat where he belongs.

The black Mercedes passes the guard of honour to a round of applause, something Colin is no stranger to from his sporting ventures. This time it is slower and more elongated. The cars exit the drive one by one, beginning the dip and then the ascent into the little village that overlooks its peaceful lake. Three quarters of the way up, the magnitude sinks in.

Streams of Gowna jerseys are standing either side. As Colin passes, they turn. They walk with him, a gesture so simple and so poignant. The rain begins to lash down, but they walk focussed and unfazed the entire way up to the church. At the crossroads are school children and young adults, belonging to both Colin and Caoláin. They too are soaked, but they don’t complain.

Father Bannon leads the procession. The church is wedged inside and out, as is the community centre where the Mass is being streamed. Early on, Colin’s cousins and friends leave symbols by his side at the altar, including some of his haul of jerseys and a Guinness Book of World Records that recognised his encyclopaedic knowledge, a knowledge that drew comparisons to the great Jimmy Magee.

Soon from his uncle Michael O’Reilly comes the tale about his father’s phone receiving notifications for a team by the name of Hapoel Ironi Kiryat Shmona F.C, a team that few could pronounce never mind have heard tell of. But of course, there was method in the madness, with Baileborough man Cillian Sheridan leading the line for the Israeli outfit. Trust young Colin to know.

When the time comes to walk down to the graveyard, the sun is miraculously out again. Over 20 men take their turn to carry Colin to his resting place, nearby his Granda Jimmy whom he never met. Each of his relations delicately place a rose on top of him once he is lowered, while on his shimmering, golden headstone is the badge of his beloved Chelsea F.C.

“On this May morn’, as I walk out, my thoughts will be of you.” The tones of his favourite song “Grace” will never be the same. A line that encapsulates the inner thoughts of all those nearest and dearest.

But not entirely, because your smile will be with us far beyond this “May morn’”. You will be in our thoughts forever, every day for the rest of our lives. The green and red of Gowna, the blue of Cavan, the blue of Chelsea, you will bring colour to them all. Rest easy buddy. You were truly one of a kind.