AFTER claiming their first ever Cavan Intermediate Championship title, Butlersbridge’s manager Daragh McCarthy says his team are on a high, and looking forward to playing Down champions An Ríocht this Saturday.

McCarthy paid tribute to the underage coaches, and those who came before him, for their role in getting Butlersbridge to this point.

“The club are delighted,” said McCarthy.

“There’s a lot of players who’ve come through the ranks there in recent years and that’s because of the coaching that’s been done at the club.

“I’m not a Butlersbridge man myself, I’m an outsider, and the work that’s been done by the underage coaches is really starting to show.”

Following the championship win, the players were given some time off to celebrate, but they couldn’t wait to get back out on the pitch and begin preparations for their Ulster campaign.

“Preparations have been good. We gave the lads a couple of weeks off, with the big break there between the county final and the first round (of Ulster).

“I know myself from winning championships, that you like to celebrate. They enjoyed themselves and when they came back, they were chomping at the bit, and nearly looking to get back into training earlier then we were bringing them back.”

Preparations have been good for Butlersbridge, and McCarthy feels that the added coverage of this year’s club championships, helps managers when scouting unfamiliar opposition.

“This streaming that has been going on in all the counties is a great job.

“I’m sure An Ríocht feel the same, and it’s great to be able to watch them and have an appreciation for what they did too. It was their first time winning a senior championship of any description.

“They have a mixture of youth and experience there too. Getting to watch the games and learn a bit about the lads and seeing the way they play football is great.”

McCarthy has been impressed with what he has seen, especially their performance in the Down county final, where they stunned Darragh Cross with two late goals to win the game at the death.

“They’re a good club. In that final there was a lot of questions asked of them, and they showed great resilience.

“The impact of their subs was really good that day, and that’s the sign of a good squad – that fellas are coming on and they’re chomping at the bit and ready to go.

“We’re under no illusions about the challenge we have on Saturday, but we’re looking forward to it.”

One might argue that Butlersbridge have an advantage with the game being played in their home county at Kingspan Breffni, but McCarthy pushed back on that, and said that both teams will be up for the game, no matter where it’s played.

“Breffni Park, Newry, wherever – a game is a game, a pitch is a pitch.

“I’m sure the lads from An Ríocht will come down and look at Breffni and be delighted, and look forward to playing on that pitch.

“I don’t think the pitch will have any bearing, I think these two teams will just look forward to getting out and playing a game of football.”

When asked about his ambitions for the Ulster Championship, McCarthy wouldn’t be drawn into any predictions about how far his side can go, as they will take each game as it comes.

“What is ambitious? I mean each game we go out and try to perform, and that’s all I ask the lads – to perform the best they can. I’m not looking three weeks down the line, it’s just about taking each game. 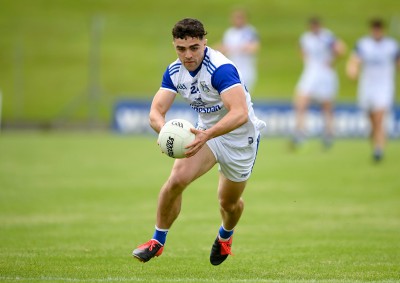