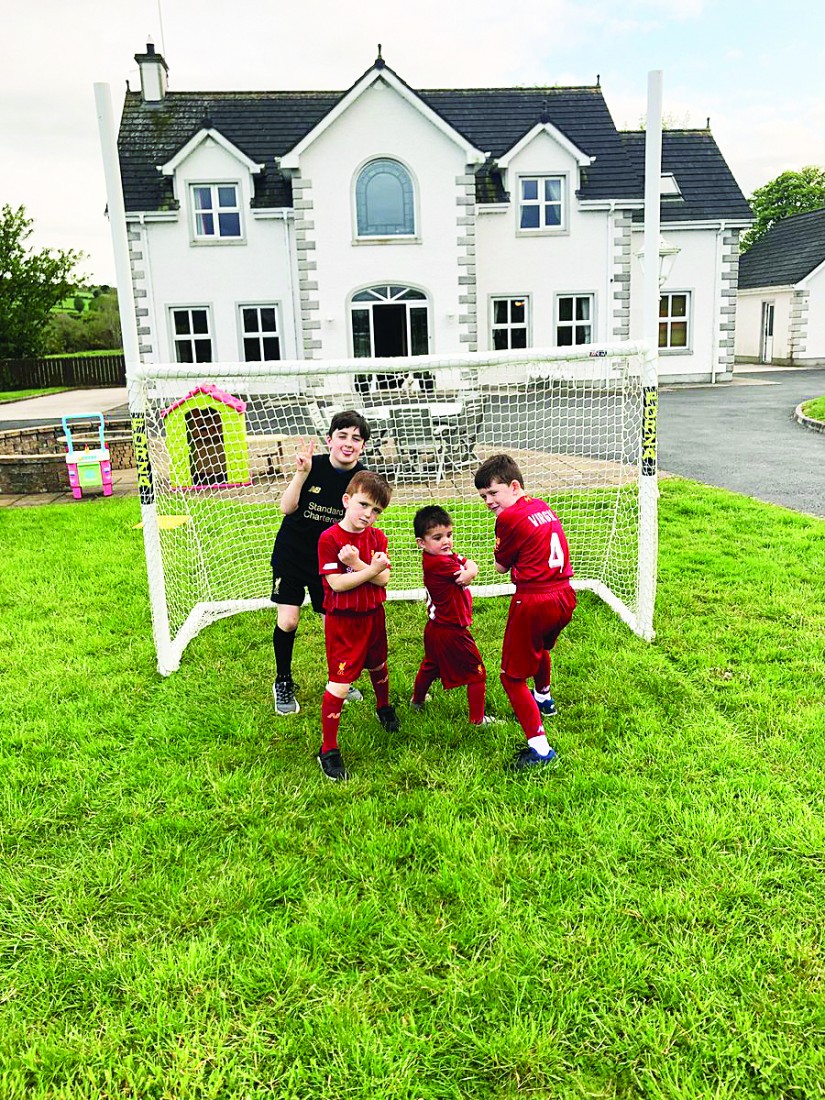 This weekend, two Dromintee men are in Madrid for the Champions League dinal, however they are supporting opposing teams. Aidan Rice is a Liverpool fan but Anthony Fearon is a Spurs fan. We caught up with both of them to get the Gael’s thoughts on this weekend’s final

DROMINTEE chairman Aidan Rice is a fanatical Liverpool supporter, and he’s one of the lucky few who own a golden ticket to Saturday’s Champions League final against Tottenham.

Both clubs involved received 16,613 tickets apiece for big game, and it’s fair to say they could have been sold many, many times over if they had have gone on general sale.

Liverpool fans who had qualified and registered for a “ticket ballot” had approximately a one in 4.6 chance of being successful to purchase a ticket – and for the second year running, luck was on Aidan Rice’s side.

His only wish is that the outcome is a little difference after last year’s 3-1 defeat to Real Madrid – Liverpool fans are probably still having nightmares of Sergio Ramos, Gareth Bale, and a butterfingered goalkeeper by the name of Loris Karius.

Aidan said: “I think I nearly deserved one after the trip I took last year to Kiev. I had to take a train to Poland, then a bus for 15 hours, and the same again on the way back.

“Last year was disappointing, but it was an unbelievable event and the whole day was an amazing experience.

“It’s like All-Ireland final day – it’s got that feel to it, street entertainment and beer tents, food markets and music. It had everything so I suppose I’m expecting the same again.”

Liverpool produced one of the greatest comebacks in Champions League history when they dismantled Barcelona to book their place in the final for a second year running.

European nights at Anfield at always memorable affairs, but this was a particularly magical occasion and Rice was lucky enough to have a front-row seat.

“It was right up there with any sporting event I’ve ever witnessed. No-one thought they had any chance before the game as they thought a three-goal deficit was a bridge too far.

“Barcelona couldn’t handle the small nature of the pitch and the crowd being on top of them.

“Surprisingly, they got sucked into that even though a lot of their players are in the twilight of their careers.

“There was a certain amount of luck involved – they could’ve scored early in the first-half which would have killed the game as a contest.”

Rice has engaged in a bit of back-and-forth slagging with his club-mate Anthony Fearon (the fella on the opposite page, otherwise known as Barmby) ahead of the match.

“Anthony’s very confident about Spurs anyway and we slag each other on Twitter.

“I told him that he had to buy me dinner but realistically I’m not sure if I’ll see him when we’ve over there. There’s always a bit of mingling but the majority of the time the teams are kept separate.

“I’m going over with eight other lads. They’re just lads I met over the years, a lot of them are actually Scousers but only three of us got tickets.”

Still, it’s all fairly harmless and Anthony and Aidan used to regularly attend Dundalk FC matches together before the Gah got in the way.

He still has space in the diary to attend Liverpool league matches, however, and he’s passed his love of the team onto sons Callum (9), Lughan (7), Manus (5) and Sennan (3) (we also promised to give his wife Ciara a mention).

“I’m chairman of the club in Dromintee so something had to give way. I used to regularly go to Dundalk games, Andy Watters of the Irish News did a piece with me when they got to the Europa League group stages, but I haven’t been in a while.

“My own two lads are now playing u-6 and u-8 on a Friday night, the exact same time as Dundalk games so that’s where my commitment lies.”

He added: “The club’s going well, we have extended our facilities with a resurfacing of an old field, it’s one of our best now. Our underage structures are growing and we’ve Aidan O’Rourke as coaching officer, he’s fantastic.” 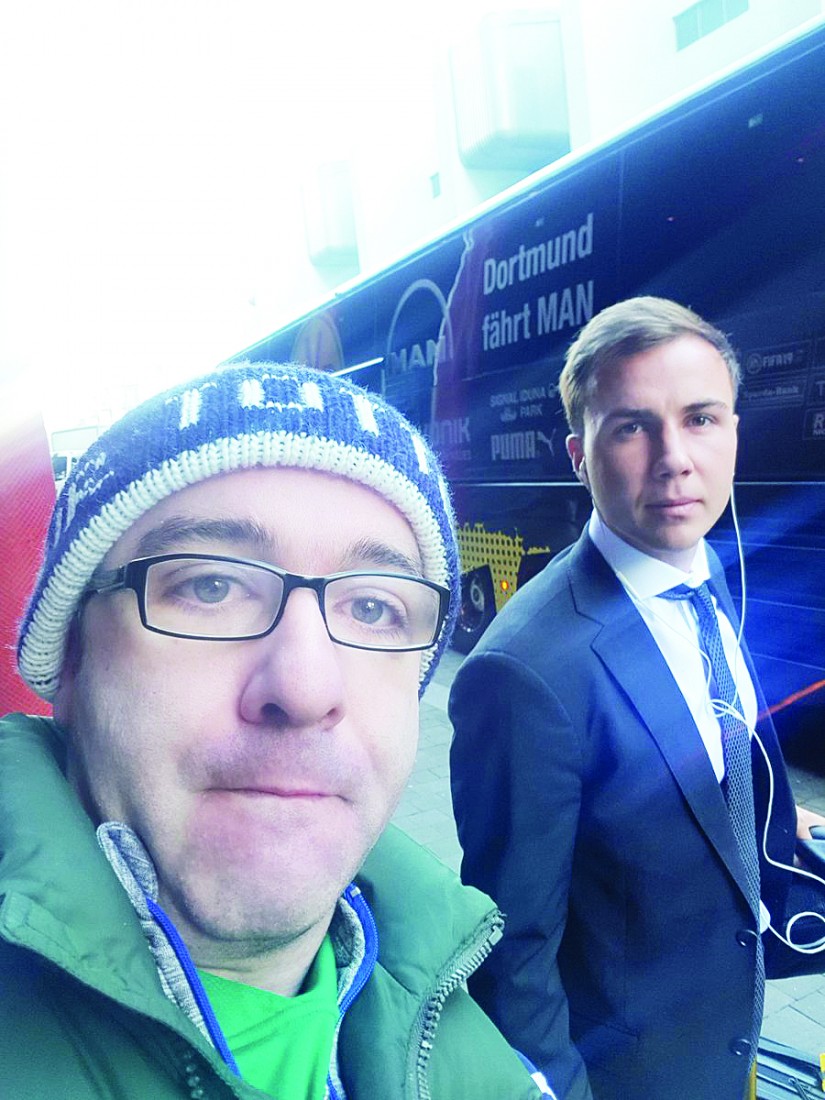 UNLIKE his club colleague across the way, Anthony Fearon doesn’t have a ticket for the champions league final, but that won’t stop him from going to Madrid to cheer on his beloved Tottenham Hotspurs.

GAA, it’s fair to say, is Fearon’s first love. He’s played for Dromintee for 15 years now, and it’s also worth flagging up that he was Down’s physiotherapist during the Eamonn Burns era.

But that isn’t intended to devalue his long-standing support of Spurs, stretching all the way back to 1991 when they won the FA Cup for a then-record eighth time.

Fearon is no fairweather supporter and remembers when they finished mid-table year-after-year-after-year, so he’s going to Madrid this weekend even though he doesn’t have a ticket for the Wanda Metropolitano, the home of Atletico Madrid and the venue for this year’s Champions League showpiece.

“I’m flying to Alacante on Saturday morning and hiring a car and going up to Madrid and then going back home on the Sunday evening.

“I’m hopeful of getting a ticket – make sure to put that in, I’m hoping someone takes pity on me – but I’ll probably end up watching in a fan zone with thousands of other people. It’s the Champions League final but I wouldn’t be looking to spend too much over the odds either.

“I’m actually sharing a journey with a couple of Liverpool fans as well, so that should be interesting!

“Mark Poland is actually a big Livepool fan, he’s very quick on Snapchat or Whatsapp after they win, he’ll not be as quick when Spurs win on Saturday week, he might have to go into hiding.”
‘Barmby’ says he’s pretty much surrounded in all corners by Liverpool fans, but there’s no shame in being a follower of Mauricio Pochettino’s high-flying team.

“Back in the day I played football with some older lads in ‘Sewer Stadium’ in Jonesborough. I scored a few goals around the time Nick Barmby was going well and they named me after that. It stuck and some people don’t even know my first name.

“There aren’t a lot of Spurs supporters around Jonesborough and Dromintee but I’m a member of the Dundalk Supporters club. The likes of Mark Poland and Benny Coulter are big Liverpool fans, as is Cathal McKenna and Philip McEvoy in my own club, so there should be good banter ahead of the final.

“Everywhere in the north is either United or Liverpool, but there are a few Spurs fans about in Newry because that’s where Pat Jennings is from, there are a lot of them in their forties or fifties.”

While Fearon might have to content himself with a place in a fan zone on Saturday night, he’s still been to a number of Champions League matches this season.

“I saw them play Barcelona in the group stages, it was great to see Messi that night, and I also saw them hammer Dortmund,

“I got a couple of photos with a few of their players the morning afterwards at the hotel – there’s one of me and Mario Gotze.

“When they were playing Ajax in the semi-final I had a reserve game but it was cancelled so it worked out that I could still watch it, I was never so glad to see a game cancelled.

“To be honest we haven’t been playing overly well lately, we slipped from third to fourth in the table, and Pochettino has a tough task on his hands as to whether start Kane or not. Lucas would be a tough man to drop as he scored a hat-trick in the semi-final.”

Despite his caginess, he still recognises that it’s some position for Spurs to be in as they get ready for their first ever appearance in the final.

“Growing up as a Spurs fan, it was always some other team. In ’99 it was United, then Livepool, then it was Arsenal, our enemies, who were in the Champions league final in 2006. It’s kind of our turn now, so hopefully we’ll strike while the iron is hot as these chances don’t come around very often.”