FORMER Monaghan ladies’ star Brenda McAnespie says the level of preparation has gone to a “completely different level” but is enthused by the progress of the game.
In a feature interview for Gaelic Life, to mark 25 years of Monaghan’s back to back All-Ireland senior titles, McAnespie spoke about how their rivals Waterford drove  standards to a level they needed to surpass on their route to success.
“It was easier to get to an All-Ireland final,” she said of her own playing days. “Now you have Gaelic football in every county, the competitiveness is unreal…at a completely different level.
“It’s like the professionalism we brought in ’96, but is nothing compared to now.” said McAnespie, whose four daughters have played county football and son Ryan is on the Farney senior team.
“It has changed completely,” she added. “You could nearly say it’s half professional. To win an All-Ireland at this stage is very hard, to win one, you are very lucky.”
The Monaghan and Waterford teams of 1997 and 1998 will be presented to the crowd at Sunday’s triple header which will see Ulster rivals Antrim and Fermanagh lock horns in the junior decider. Meath are going for a back to back senior titles after seeing off Donegal in a tense semi-final.
“Watching it this year, there were a lot of teams very near it. There were five or six teams and any of them could’ve won it,” McAnespie said.
“In the next few years, there will be a few more added into that with counties coming with very strong underage teams.”
McAnespie played on Monaghan’s 1992 All-Ireland junior winning team and the county remained at senior level for an unbroken 30-year stint until their relegation this season.
From watching the underage teams blossoming, the former Farney star backs the county to be back challenging at the top.
“You have Niamh and Fiona Kindlon involved with the u-16 group since u-14. Give Monaghan another year or two and I can see them back up there at the level, fighting to bring a senior title back to Monaghan. The last was in 1997, but hopefully in the next two or three years you could see Monaghan back up there again.”

Check out this week’s Gaelic Life for a look back at Monaghan’s glory days of 1996 and 1997. There are also interviews with the Antrim and Fermanagh  camps ahead of Sunday’s junior decider.

Our epaper is available at www.GaelicLife.com 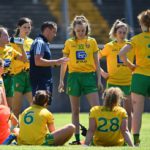 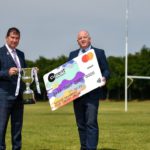