Early goals in both halves from Áine Tubridy and O’Neill were the difference in a repeat of last year’s tie at the same stage of the competition, also at this same venue.

Orlaith Prenter’s vision helped her give the assist to midfielder Tubridy, who was charging through the centre of Carlow’s defence. The pass was inch-perfect, so exact that Tubridy had the easy task of not breaking stride and flicking the ball past the helpless Nicole Hanley in the Barrowsiders goal.

That happened in the opening seconds and the game then hinged on that early goal. Antrim took advantage of a shell-shocked Carlow by tagging on three quick-fire points from Prenter, Bronagh Devlin and Caitlin Taggart.

Carlow’s sole focus then was to chase down that tally throughout the rest of the game. Inspired by Niamh Murphy’s block, Sinead Hayden went down the other end and opened the Leinster side’s account.

The goal separated the sides on three occasions in the first half with Ed Byrne’s outfit cutting the gap through the impressive Sara Doyle.

Antrim with the lead, were in control and played to their strengths with some direct football that stretched an already chasing Carlow side. Antrim tended to kick the ball more than their opponents and it showed in Grainne McLaughlin’s wonderful two points.

Nicole Hanley pulled off two point-blank saves and Doyle frees were enough to keep Carlow in the contest, but Antrim finished the half strong again. Prenter and O’Neill pointed to make 1-10 to 0-8 at the interval

Lara Dahunsi was her dominant self in midfield for the Ulster outfit and she clipped over the opening point of the second half, Doyle continued to keep the scoreboard ticking for Carlow but O’Neill’s goal in the next attack would all but seal the win.

Carlow could not sustain enough pressure while Antrim continued to pick them off the points thanks to McLaughlin’s free-taking prowess.

O’Neill’s second goal would eventually end it and, with a final on their horizon, Antrim’s bench was emptied and competition for places rose with Theresa Mellon and Michelle Magee finding the range in the finish. 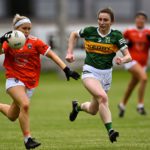 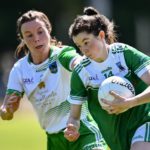 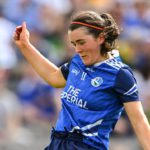