JOHN McEntee is confident that we will see the ‘real Armagh’ when they take on All-Ireland champions Tyrone in a mouth-watering Round One qualifier clash at the Athletic Grounds on Sunday week.

Describing it as the ‘perfect draw’ for his county, the former Armagh star is hopeful that they can rise to the occasion and produce a performance more in tune with their high-octane performances in the early rounds of the league, casting aside a dismal showing in the first round of the Ulster Championship against Donegal.

“I think it’s the perfect draw. We’re up against the All-Ireland champions, we’re in Armagh, and we’ve already played them twice this year and they were feisty, tense matches.

“There’s always such a great rivalry between the two sides, and I think when you draw such a top team, you either go down fighting and you can hold your head high, or you get that bit of impetus that’s needed to go to the next level and get across the line.

“I think you will see a rejuvenated Armagh, they’ll use this game as a platform to improve and you’ll see the real Armagh team.”

The Orchard County have fared well in the backdoor during Kieran McGeeney’s tenure in charge, and his former teammate McEntee reiterates that they can show that their 1-16 to 0-12 defeat to Donegal was nothing more than a bad day at the office.

“They’re better than that and their league form shows that they’re a good team. Sometimes you need to go into games with a bit less pressure and that’s why they’ve done well in the backdoor. They need one or two big wins to gain belief and that could lead to future success.

“I don’t see Armagh changing an awful lot at this stage, it’s too late in the year to change systems and they know Tyrone well at this stage. They just have to come up with a way of beating them and sometimes it’s just about showing up and performing on the day.”

McEntee, who was a leading protagonist in the famed Tyrone-Armagh rivalry of the noughties, also weighed in with his take on the indifferent form of the All-Ireland champions, who were unceremoniously dumped out of Ulster by Derry on the first of May.

“There’s still a massive amount of quality in that Tyrone squad. If they can shake off the overhang from winning an All-Ireland title, they’re still a formidable outfit as they showed in their league match down in Kerry.

“Winning the title drains you so much, there’s that element of celebrating the success and you maybe rest on your laurels a bit.

“There’s a lot of questions asked of All-Ireland champions, and in the early part of the season they haven’t looked as fit as last year.

“They’re still potential contenders but they just need to sort out their fitness and attitude. Their discipline has been very poor, but sometimes it’s not about the attitude, but the conditioning of the team. They know their standards have dropped and that can get under your skin, but it’s also something that can be remedied relatively quickly.”

McEntee, a gifted playmaker in his day, was part of the Armagh team that made history by winning what remains their only ever All-Ireland title back in 2002.

To their credit they made it back to the final in 2003, where they lost by three points to Tyrone, but he says their consistently high levels of performance may have factored into their failure to achieve that elusive second All-Ireland title.

“We maintained our high standards and in some ways we struggled as we didn’t have down periods. Tyrone tended to benefit from the backdoor and seemed to come good at the end.

“We’d a lot of very driven men, spearheaded by Kieran McGeeney, who was incredibly motivated. The level of commitment and honesty in training was exceptional but the problem is finding the balance.

“We only managed to win one All-Ireland and I’m very grateful even to have one, but maybe if we let things ebb and flow a bit we’d have got another.” 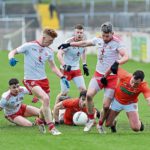