Advertisement
HomeCountiesArmaghArmagh ClubMaghery to the fore as players honoured
Advertisement

COUNTY champions Maghery have been honoured with seven spots in the Armagh GAA’s Club Team of the Year.

Finnian Moriarty’s side stormed their way to the county title so it was no surprise to see them take up the biggest share of gongs.

The Maghery manager put his faith in goalkeeper Caolan Hendron last season and it paid off as he had an excellent breakout campaign. His saves in the final against Crossmaglen proved to be particularly important.

Ciaran Higgins, who rotated so well between full-back and centre half-back, and Stephen Cusack, one of the best club players in Armagh in recent seasons, were named in the defence. As too was Brendan Haveron who made some lung-bursting runs up and down the wing all season while he also contributed to the scoring, as witnessed by his goal against Cross.

There were awards for the Forker brothers, Stefan and Aidan, who were extremely impressive in attack. Stefan’s experience shone through while Aidan was inspirational up front.

As was Brian Fox, who stood up in important games such as their extra-time win over Clann Eireann.

Stephen Morris was in outstanding form and his injury ahead of the final was sorely felt, while Oisin O’Neill was inspired throughout their campaign.

The free-running Jamie Brady has earned a spot in defence as his final performance really caught the eye. He is joined by attackers Stefan Campbell and Niall Henderson. ‘Soupy’ played some of his best-ever club football in 2020 while talented soccer player Henderson scored 0-3 from play in the final win over St Paul’s. The losing finalists were rewarded with a spot for Peadar Nash who performed the sweeping role so well.

Tony Canning was the side’s go-to man-marker all year and was duly honoured, as was attacker Cormac Toner who brought a real threat to the side.

The Chairman’s Award went to Paul Heaney and Kevin Fox for their work on Armagh TV while famed former Orchard referee Sam McClatchey was named Volunteer of the Year.

There were referee awards for Kevin Faloon, Ronan Harte and Stephen Murray while the Scór award went to St Patrick’s, Cullyhanna. 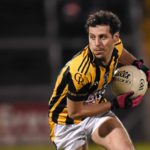 Clarke back with Crossmaglen