TULLYSARAN qualified for the quarter-finals of the Intermediate Championship with a nine-point win over Crossmaglen IIs. While the scoreboard may suggest an easy day at the office, it was far from straightforward for the O’Connell’s men.

One of their most experienced campaigners, Adrian Conlon, who lined out at full-back last Friday evening, explained that Tullysaran in no way underestimated the Ranger’s seconds side and always knew they were in for a real battle.

“We’re well aware of those boys, they’re a good bunch and there’s some great footballers in that team,” said Conlon. “We knew what we were going to face here, we definitely weren’t complacent in anyway at all.

“We knew what we were going to be faced with an in fairness to them they did bring it and we’re just delighted to get past them.

“I wouldn’t call it a banana skin, we have huge respect for those boys, they are a real honest team, and we knew we were going to get a real honest effort. It’s the first round of the championship, it’s going to be hard hitting but it’s just about getting through.

“We’d be disappointed with huge aspects of how we played and there’s a lot we can work on and a lot we can improve on, so we’re just delighted to get through and the hard work starts again on Sunday.”

Tullysaran suffered a disastrous start, conceding a penalty and a goal within the opening minutes of the game. That three-pointer kept Crossmaglen ahead until the second half when the favourites began to turn the tide and showcase their undoubted talent.

“That’s championship football, things like that happen and you have to react. We were disappointed we didn’t act as quickly as we should have but we got there in the end, so we were happy enough.

“We knew we had to try and get level and try and get our noses ahead and then just try to keep the scoreboard ticking and we did that and luckily enough we got through in the end.”

Eddie Mallon and Gavin Conlon were the main men on form and the pair contributed a combined 0-17 of Tullysaran’s 1-19 tally. Mallon rattled off 0-9, with six of those coming from open play, while Conlon was responsible for 0-8.

Full-forward Mark McKeever chipped in with the second-half goal that put the result beyond doubt, and Tullysaran now await the winners of Forkhill and Belleek, who drew last Sunday, in the last eight of the championship.

Tullysaran are currently led by former Tyrone stars John Devine and Davy Harte, who are in their first year in charge. “They’re two good lads, they are just really focused on doing the basics right and working hard and that’s what we’re trying to do,” added Conlon. 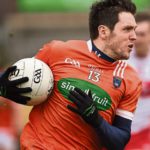 Culloville on the up after battling win