Neither side were overly impressive in their opening round wins, but they are where they want to be. St Paul’s should have the edge here and if Andrew Murnin is in full flow, they’ll make it through to the last four.

Two of the big hitters in the Intermediate Championship collide on Sunday in what should be a fascinating encounter. If Connaire Mackin returns from injury, that should give Shane O’Neill’s a slight edge.

Belleek edged past Forkhill after a replay and if they are to get through to the last four, they’ll have to stop the threat of Gavin Conlon and Eddie Mallon who hit 0-17 between them in their lats outing. Tullysaran are the more experienced side and that should see them through.

It could be a very long day for Collegeland if Culloville’s first outing is anything to go by. The Blues eased past Keady and while Collegeland may offer a better test, they won’t have enough to halt Culloville.

The winner goes through to the championship semi-finals, so everything is on the line in this one. Derrynoose have had a poor campaign so far and that may be set to continue on Sunday, with Craobh Rua just getting past them

The best two in the competition for some time now and a repeat of the 2021 Senior Championship final. Middletown have held the upper hand over the last number of years and their domination looks set to continue. 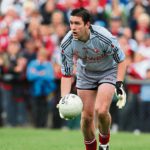 Tullysaran delighted to get over first hurdle