WITH Ballymacnab not playing particularly well and under the cosh against a Sarsfields side that had gone unbeaten in their home ground for two years, Chris Kerr stepped up to slot over a long distance free, his fourth of the season, and secure victory for his adopted club.

As results played out that weekend, that score confirmed promotion to the top tier and a Division 1B league title for the
’Nab.

“There were mates of mine saying to me that it makes sense – if you can kick a ball 70 or 80 yards from a kickout then surely you can kick a 45 or even a free in around 50 or 60 metres,” Kerr pointed out.

“I probably did it more with Antrim under Frank Fitzsimmons and Frank Dawson, they let me have a crack at it.

“If you can add something then why not and it’s a good way for goalkeepers to manage the game
too.

“You want to take your time coming up and you can get set up and give people a breather too. As long as it goes dead, but ideally if goes between the posts and you’re laughing.”

Kerr, who runs his own sports massage business, had a storied career with St Gall’s and Antrim
but following his relocation to Armagh and after two cruciate ligament surgeries, he was on the lookout for a new club closer to
home and Ballymacnab fitted the
bill.

He knew a few of the players but a chat with former Antrim, St Gall’s and Ballymacnab boss Lenny Harbinson confirmed Kerr was making the correct decision. “I already knew of Jack and Rory (Grugan), Ryan (Kennedy), Gavin (McParland), playing against them with Antrim in McKenna Cup
and stuff over the years and then I’m in and around the same age group.

“I suppose by fluke it was just building up good relationships with people because there were maybe 10 or 12 boys that came to me for a sports massage from the team and from the club.

“By the time I’d made my mind up, the commute going up and down the road (to Belfast) was becoming tough and with living in Armagh, a few of the lads just said ‘if you’re going to go anywhere why don’t you come to us’.

“I spoke to Barry (Dillon, the Ballymacnab manager), he knew about me, he managed Portglenone against St Gall’s for three years. I met Barry and spoke to him. It’s all well and good but obviously I’d played for St Gall’s since I was five and I was 30 years playing and with everything that we’d done and achieved, it wasn’t just an overnight decision.

“I spoke to Lenny as well and Lenny had managed Ballymacnab and was well thought of. He said it was a no brainer, that they’re really good people who take their football seriously and I just thought why not then. That was how it happened.”

It didn’t take long for Kerr to realise the difference of club football in Antrim and Armagh.

“The biggest thing was adapting because in Antrim and in particularly St Gall’s, the league was never a priority. Finishing in the top four because of the (championship) seeding was important but it was never a burning desire for us to go after the league.

“Out of that period where St Gall’s had won 13 championships, I think we’d won one league. It was just adapting to the fact every league match mattered and from the off the goal was to get Ballymacnab back to Division 1A where they rightfully belong. I think it showed this year in the league, we’re unbeaten to date and with three games to go we won the league.

“I think that speaks volumes. Even the approach from the management and the players, and everyone involved within the team and
within the club, that was a big priority, so it was just getting my head around the fact that every match was a big one.

“I really enjoyed it. I had one league medal before from my time with St Gall’s and just having conversations with the lads after it, it was good because you have to celebrate these things.

“It’s good to win a league and get back to 1A and we want to go on and push ourselves against that top table in Armagh then next year.

“What I’ve noticed even from coming to Armagh is the top half of 1B into 1A, there’s not that much between the teams. It’s much of a muchness between a lot the teams so anyone can beat each other on any day.

“I think even throughout the league we won in every way possible. We won heavily, we won where we were playing really badly and scraped over the line and had to dig in or down at half time and I think that showed how competitive the league is..

“In Antrim once you get past that top four or five teams there’s a
major drop off in quality and it’s showing.

“That’s been the case for the last 15 years in the Antrim leagues if you go back through the archives, so I think Armagh is much more competitive and obviously that reflects into the county set up too.”

Back in April of this year, somewhat unexpectedly, Kerr was recalled to Enda McGinley’s Antrim set up. He wore the number 16 jersey as the Saffron’s crashed out of the Ulster Championship against Cavan and while he hasn’t given up on his inter-county dream just yet, there are new roadblocks in place that are making it increasingly more difficult to commit.

“I suppose in a way I was always hoping that the call would come because doing the cruciate twice, you’re thinking will I ever get back to that level again.

“It was just eating at the back of my head and the circumstances that it came under where there were goalkeepers that left the panel. I went in and I really enjoyed it, it was like a new lease of life.

“It’s a hard one because it’s an addiction, you’re completely addicted to that buzz and the game and you’re always thinking if I’m going well then, I could do a job. But I suppose now we had a baby four weeks ago so all that would have to take preference first.

“I’m never going to say never. If it came to it and everything was placed right that you could give it a go, then why not.

“But at the minute it’s hard to make that call because you haven’t even played the club championship yet, it’s mid-August and plenty of things can happen between now and then.

“I would definitely never rule anything out.” 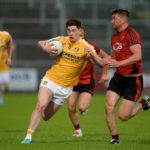 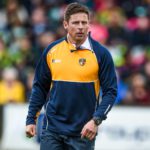