AFTER playing just four games in the opening nine weeks of the season, Sarsfields will now play the same number of matches in ten days.

The High Moss men have started brightly, winning four and drawing one of their opening six games to sit in fourth place in Division 1B.

Boss Brendan Hughes, who took the job late, has been happy with the extra time he had on the training ground with the players.

“We’ve only played six games. We played our fifth one on Thursday night against Silverbridge and then the sixth on Monday against Carrickcruppen.

“Up to that we only played four in the first nine weeks. We were four games behind some of the other teams but obviously now we’re getting them crammed in. By Sunday we’ll have eight played, we’d four in nine weeks and then we’d four in ten days.

“I suppose I was late coming into it; it was just before the start of the league and their manager had stepped down and Michael Stevenson approached me. We agreed to give it a go and the players have a very good attitude.

“The fact that there were only four games in nine weeks, gave me a bit of time to work with them in training. It’s given me that opportunity to work on a few things and so far, we seem to be getting on okay.”

Sarsfields are renowned as a good attacking side with fire power in the form of the McGeown brothers, Eamon and Paul, Michael Stevenson and Thomas McAlinden.

“They’re a good footballing team, they’re what I would call a heads-up team. They have good awareness of what’s going on around them and they certainly have a few individual players that are well known for putting up decent scores.

“We’re in a good position in a sense that last year they had a strong run through the Intermediate league. They only lost once all last season so they’re in a way of going now. They’ve been used to win consistently, and they’ve carried that forward this season.”

While Sarsfields are in a decent position in the league, Hughes insists his team are taking it one game at a time.

“I asked some of the players at the start what their targets would be and they said very much to consolidate the league first of all.

“They want to play at senior level so we’re just looking at it one game at a time.

“Whenever there was the gap between the games there wasn’t too much else you could do only get ready for the next game and now they’re coming up thick and fast – we’re not training, we’re just going from game to game.

“Recovery is critical. There’s been a few players injured and a few lads away on holidays and things like that so by this weekend we hope to have another four or five back. That’ll enable the team to be freshened up a wee bit because with four games in ten days, you quite simply can’t be putting the same team out every match.” 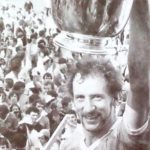 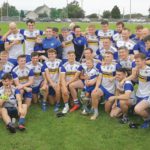