AIDAN Forker insists that his Maghery side are focusing on improving their performances, rather than worrying about the threat of relegation.

Gavin Wylie’s men gave themselves a huge chance of staying in the top tier last weekend when they defeated Crossmaglen, but they now must travel to the Rangers on Friday evening in search of another two points.

“I think there’s some in the group who are more preoccupied with it than I am,” said the Armagh defender. “There’s a lot of us trying to get us to focus on performances so that was an improvement again.

“We’ve been showing wee glimpses of 20-minute spells or 30-minute spells of decent football and getting on top of teams but we struggle to get it together for the whole time, but that was promising there today.

“There’s not much between any of the teams, we’ve just been unfortunate to be on the wrong side of a few results.

“That’s probably been the tale of us for a while, we’ve been working on trying to control the game in the right periods and sort of recognising that as I’m sure a lot of teams are.

“We’re at the business end of the season so that detail is going to be important, bigger pitches and more intense football so we’re hoping we’re going to be on the right side of those results as opposed to letting them get away from us.”

Maghery take on Armagh Harps, who are currently top of the league, in the opening round of the championship in a repeat of the 2017 Senior Championship final.

“The sides also clashed in the first-round last season when Maghery edged through with a two-point victory. Momentum’s important and winning is a habit and we’re getting closer to the championship; we only have one game left and a good game in preparation for the championship, which is going to be against a tough Harps team who are going well obviously.

“We’ll focus on ourselves and on our performances and improving those wee bits of details that we need to be on the right side of the result. All credit to our management team, they’re working hard to coach that on a Tuesday and Thursday night.

“We want to stay up obviously but it’s not our sole focus. You can’t be going into the last game of the season hoping that results go your way, and you get the win, that’s just not where you want to be so if we do end up going down, it’s not the end of the world and it’s on us.

“We’re just focusing on trying to compete against the Harps in the championship who are obviously one of the top teams this year so far and they’re going very, very well and we know we’ll be underdogs.

“We’ve obviously got a lot of experience in the team who can go there and compete against them.” 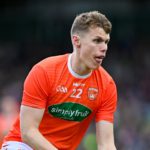