ARMAGH are “like a club team, we’re not like a county team” says joint captain Michelle McArdle ahead of Sunday’s Premier Junior All-Ireland final.

The Orchard ladies face Antrim in the showpiece, a side they’ve already beaten three times this year.

“The forward line has clicked and it’s the same with the backs, everything’s just clicked and we’re like sisters at the end of the day. It’s like training with your club and not with the county.

“There’s a new couple of players in this year and I just think we’ve really gelled together. We’re like a club team, we’re not like a county team. Obviously, we’ve already beaten Antrim a couple of times this year but they’re going to come out bigger and better than ever.

“We’ll be ready for it; we know it’s going to be a hard fight and we’re prepared for that. We’re probably favourites but it’s all on the day, you’re only as good as your last game at the end of the day.”

Along with Gemma McCann, the Ballymacnab midfielder has captained her side to the decider and hopes to go one step further than last year when they lost out to Wexford.

“It’s unreal, this is where you want to be when you’re a kid, you dream about playing in Croke Park and the build up here is unreal and it just adds to it. It’s definitely a dream come true. To be joint captain is unbelievable, it’s a bonus. Hopefully now we can do the job and lift the cup on Sunday.

“Gemma’s the quiet one probably, I’d be the more outspoken one but me and Gemma bounce off each other and there’s nobody I’d rather be standing beside than Gemma. We share the role, and we just knock everything off each other and we work well together.”

McArdle admits that the Croke Park surroundings may be overpowering for some of the new members of the squad, but that’s where the experienced players play their part.

“Croke Park’s going to add to this for everybody, this one will be special and hopefully we get over the line and make dreams come through for everybody.

“There’s a couple of girls there, this is their first time in Croke Park and they’re hoping to get down for a wee walk around and all. Definitely for myself and a few of the other girls, we’ll probably be more settled.

“The first time I played in it, it totally ate me up. Just the atmosphere, it sucked me right in. Last year we were up against a great team but I’m hoping this year we have more confidence and we’ve bigger players now.

“Jen’s (Curry) in there and her playmaking is unreal and she’s bringing all the forwards in. We have six forwards who can put the ball over from anywhere so we’re looking forward to seeing them showcase what they have in Croke Park.” 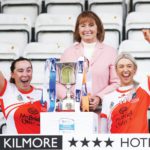 Merry glad to be on the comeback trail