A group of Armagh footballers are inspiring the children in the county with coaching camps, Shaun Casey writes…

DURING the summer of 2021 a number of Armagh players, namely Rory Grugan, Oisin O’Neill, Aidan Nugent, Jack Grugan and James Morgan, began the ‘Armagh Coaching School’ and it blossomed from there.

Over the course of 18 months, the five players have hosted a number of different football camps around the county, inspiring the next generation of both men and ladies footballers in the Orchard County.

The ‘Armagh Coaching School’ started with the aim of ‘building academic skills and athletic performance’.

The children that come along not only get to meet and learn from their heroes but also develop their skills both on and off the pitch.

On the field, the kids get to play games, take part in drills and learn the basic skills of the game. In the classroom, the county stars, all teachers by trade, take them
through their paces in maths, literacy, computer coding and well-being.

“That’s the second summer of it finished and that was our biggest one yet with four camps around the county,” said Rory Grugan, who describes the thinking behind the ‘Armagh Coaching School’.

“What we’re trying to offer is something a bit different than just your standard summer camps, I know they are a great job because it gets the kids active but it’s more so that they’re getting a wee bit extra of the classroom stuff too.

“The way it works, they would do half and half. So it’s half a day in the classroom and half a day on the pitch for those couple of days.

“The four pillars of it are well-being, a bit of computer coding, literacy and numeracy.

“It sounds like school or a classroom as if they’re going to dread being back in, but it really is just all linked to being a county footballer and that big focus on Armagh.

Grugan continued: “The numeracy stuff is all to do with the stats and GPS reports and analysis and those types of things.

“With the literacy we might get them to do a bit of storytelling about some of their favourite days supporting Armagh or a journalist report, a mini-match report or something like that.

“The boys who would have been doing the computer coding, Jack [Grugan] and James [Morgan], would do some robots and stuff. Scratch is the program they use, and they’d be making wee mini pitches and mini scoreboards saying, ‘Up Armagh.’”

The subject of well-being and mental health is a big topic in the world today and Grugan insists that they have made sure to include that in their camps as well.

“Obviously, the big thing at the minute too in school is well-being and mental health. So, we’ve obviously placed a big emphasis on that too and we’ve talked to them about building resilience and what it’s like to cope with defeat and knowing things that trigger you and how you can best react to it.

“It’s something a wee bit different and probably what we’ve found over the course of the couple of years we’ve been doing it is that the nice feedback or the praise we get from the parents is very rarely to do with the actual football or the blitz that we run on the last day.

“It’s quite often the stuff that they’ve learned on the other side of it and that’s always nice because it probably shows that we’re doing something right.”

“There’s a load of teachers on the Armagh team and a few of boys that were close talked about having something like this, running into the summer as well.

“We were all working in the south at that stage, and you get plenty of long holidays.

“I suppose we were just thinking that there was a good want for it with the fact that we can nearly be role models for the young people around the county. We felt they would be interested in coming in to work with us on the football side of it but that also, we felt it would be hugely beneficial on the classroom side of it as well.

“We just went with it last year. It was only in Armagh and Crossmaglen last year and then we built on it a wee bit. We did another quick one at Easter of this year and then we really tried to push the boat out during the summer with four camps.

“We were in St Paul’s High School, Bessbrook, and we were in St Ronan’s and Clan na Gael in Lurgan as well as Armagh and Crossmaglen, so it really took off this year and it was a big success, so we just want to keep building on it.”

They have added a ‘Winter Advanced Coaching’ camp this year with six sessions set to take place across 12 weeks from October 6 until December 15, at Armagh’s training facility in Callanbridge.

“It’s every two weeks on Thursday evenings and it’ll be split into two.

“There are limited numbers as well, we’re hoping to have about 20 per group with the 13s and 14s in one group and the 15s and 16s in another,” added the Ballymacnab playmaker.

“It’s just really more focused on skill development, seeing where they are when they come in and then getting them to do a bit of self-assessment with us trying to put things in place to help them.

“We’ll be giving them a bit of game awareness around tactical things and just seeing where we can go with it. We’ll be offering plenty of advice around the lifestyle side of it too and it’ll be running right up until the middle of December with those fortnightly sessions and we’re looking forward to getting started.

“That’s what we’ve put in place for this Winter Advanced Coaching sessions that are going to be starting in the next couple of weeks and that really does have more of a focus on the football side of things.

“It’s showing them what it is like to be an inter-county footballer in terms of training and tactical awareness and your own physical preparation, your mental preparation, lifestyle. And all that type of stuff we’re trying to develop among some of our young players.

“There’s some who may already be involved in the academies and some who may not but it’s just trying to give them something for after the six sessions. They’re coming away from it as better players and they know where they’re going to get better.

“That was another thing that we were big on in terms of what we wanted our output to be. It’s not coming to play football tennis and to take penalty shootouts, there’s a focus around the different sessions that they do.

“And even if they are younger, there’s kids that come that are as young as seven or eight, we can still get them doing the proper technique of tackling, working on their footwork.

“We plan our sessions out before hand and across the three days those younger ones have two pitch sessions and then the full blitz stuff at the end.

“We plan it that they’re getting the full aspects of the game, offensively and defensively, coached by each of our coaches so their getting the expertise of all.

“They seem to enjoy that side of it too and then they always love getting to play games. They make a big deal out of that and trying to show off all their skills that they’ve hopefully learned.”

The last day of each camp is always a bit of fun as well. There’s the All-Ireland series that the kids play out, a guest appearance and plenty of gifts and awards handed out as well which has proven hugely popular. 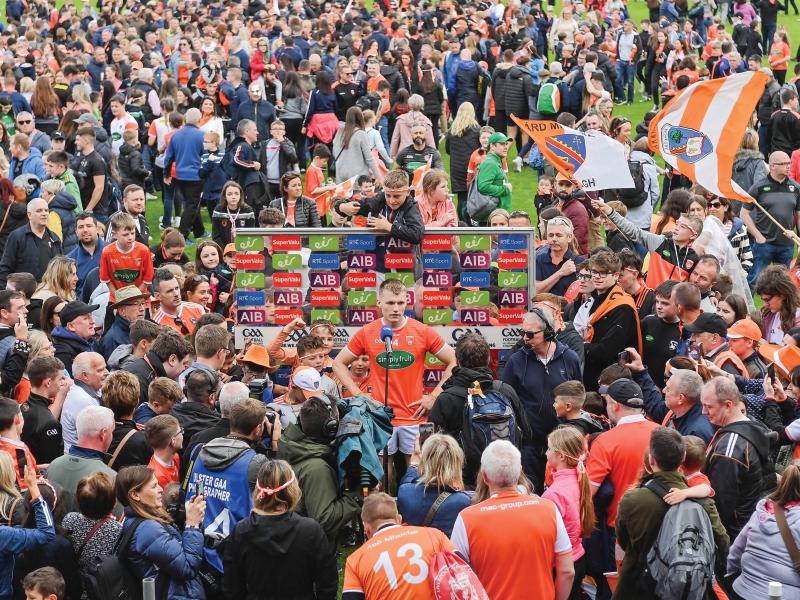 SUPPORT… Off the back of Armagh’s successful summer, the numbers attending the ‘Armagh Coaching School’ grew

“That’s always the last day and they love it. We usually have a guest appearance as well in the early part of that day, whether it’s one of our own teammates from Armagh. The likes of Kieran Donaghy was there last year, and Aimee Mackin was there in the Crossmaglen one last year.

“They get to see someone else and have a bit of a Q&A with them and they get to talk to them and have all the photos and jersey signings and all that they want, and they really love having that on the last day.

“It usually ends up that there’s plenty of competitive spirit and we split them into two and there’s prizes and a goodie bag that everyone gets to take away.

“We have Players of the Tournament as well, they’re always vying for that so it’s a brilliant way to finish it off.

“I would say we’re looking at something similar next year as well. At Easter, we get longer holidays in the south so it allows for a camp, although it may only be one because in the summer you can plan so
many.

“We’re absolutely going to do the summer one next year and hope to even build on the numbers again givenh the good buzz that was around the county last year. The time where everyone was signing up was when we had a couple of good wins with Armagh.

“There was a feel-good factor around the county and that really helped push it on as well so please God that will be the case again next year and we can keep developing
it, there’s been loads of good feedback.”

The summer Armagh had, beating Tyrone and Donegal on their way to the All-Ireland quarter finals, helped grow the Armagh Coaching School’s participation and in return, the support the Orchard County received was a huge boost to Kieran McGeeney’s squad.

“It’s funny how you see the same faces and I suppose that’s been a nice thing as well. We did a Halloween one last year as well which we’ll not be able to run this year but there’s kids who attended the Armagh camp this summer that were doing their fourth camp in a row with us.

“I suppose that’s a good sign that you have repeat kids coming again. There’re always asking and wanting to do it more and it is good to see them, and you start to recognise them about the place.

“Even at the club games there I’ve seen a few of them but it’s good to get seeing them and it’s great to see that they’re enjoying it so much.

“I’ve never seen anything like it as long as I’ve been playing with Armagh (the fan support), I don’t know whether it’s the break with Covid or if it’s just that Armagh supporters were starved of some success.

“It was mania really for those few weeks so I can only imagine what it would be like if we’d have gotten further like we wanted to, but it’s been brilliant because it gives us an extra push and you’d be delighted to see such big Armagh support.

“It was well known how well we were supported all season. The crowds that were there against Galway and how everyone was talking about the orange and white, it was special, so you do really thrive off that and it’s been great.” 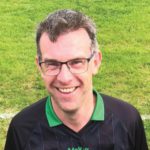 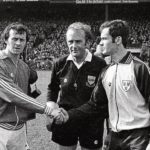 The life and times of Armagh legend Jimmy Smyth 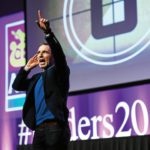 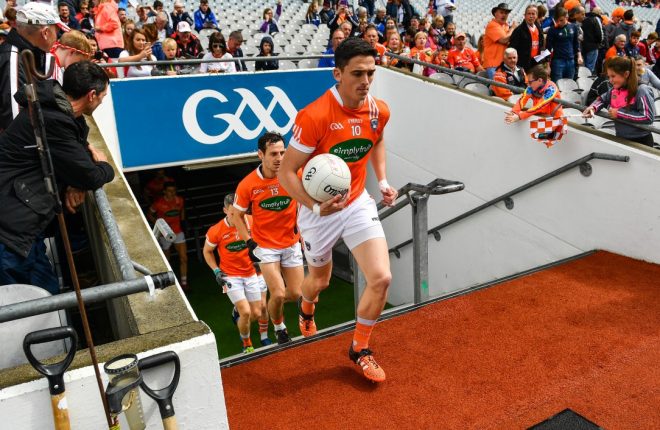