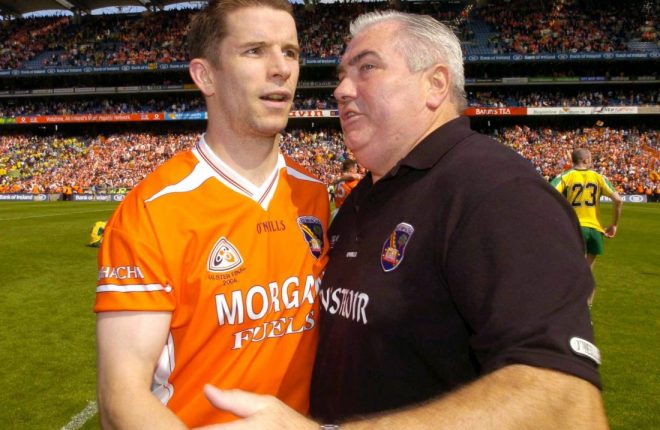 Another digit to digest is 25 – as in 25 of the 30 players involved in that All-Ireland winning squad, just over 83 per cent, have moved onto managing or coaching in some capacity in the intervening years.

Ask 100 people to describe that team in one word and responses would almost certainly include ‘intense’, ‘focussed’, ‘determined’ – even ‘robotic’.

“The one thing with every squad is that everyone is totally different,” said Kernan.

“You can’t have 30 people the same, that isn’t the way it works.

“That’s the way I approached it, you had to find out what made each player tick.

“You had someone like Diarmaid Marsden who has maybe decided to shy away from management a bit,” he said. “If ever we wanted a man to do something, he was the man.

“If you came up with an idea or plan, Diarmaid would be the one man that would come up to you quietly and say ‘excuse me Joe, could you just run that by me again?’

“He was a very deep thinker along with being a great player and a lovely lad.

“Diarmaid would be a boy who would think it out before he did while others just nod their head and say ‘yeah I know what you want.’

“Diarmaid would go through it 100 times and then go out and do it perfectly.

“Francie (Bellew) was a totally different kettle of fish. He read situations and knew how to play the percentages well. Other boys would live on the edge and take a risk.

“So everyone was totally different and that would reflect in their managerial styles.”

Kernan is also pleased to see some of his old players branching into other fields. Enda McNulty, famously, has worked with the Irish Rugby team and other sporting bodies while Ronan Clarke and Barry Duffy, the latter now based in Qatar, are involved in ladies’ football. Paul McCormack, a dual player for  Armagh for many years, has been coaching hurling and was linked to the county hurling job three years ago.

“It’s great to see Rony there (with the Armagh ladies),” he said.

“Poor Rony had a hard time of it, his career was cut short by injury but now he is with Armagh.

“I think he is enjoying working with the girls. He would have an awful lot of knowledge and what he could explain to people was very worthwhile.

“It has given him a lift and the girls will learn from him, no doubt.

“Paul McCormack is one of the natural players that could do anything and it’s no surprise that he’s still involved with both (football and hurling).

“He could play soccer, play Gaelic, play rugby, he was a great golfer. He could put his hand to anything.”

One man that Kernan is delighted hasn’t made the switch yet is his Crossmaglen clubmate Paul Hearty, who this season goes in search of his 20th Armagh Championship medal.

“He hasn’t the time to (manage) in fairness to Hearty,” said Kernan. “He wants to play for another five years, he’s a great fella.

“One of the loveliest fellas you’ll meet, and one of the most determined as well.”

On the subject of clubmates, Kernan also revealed that he was very close to bringing Bellew on board when he replaced Tony McEntee and Gareth O’Neill as Rangers manager in late 2012.

He did manage to get former player John Donaldson onto his backroom team, but Bellew proved just too elusive in the end.

If Kernan couldn’t talk him round, it’s very unlikely that Bellew will ever reduce the number of players yet to get involved in that side of the game. But like all of that ‘02 squad, time is in his favour.

Orchard harvest: The story of a team of managers 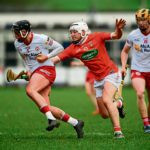 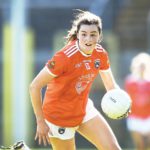