Rostrevor finished with thirteen men as Shaun Parr and Conor Doyle saw red as Celium Doherty fisted in the winning goal as Kilcoo claimed a 1-5 to 0-6 victory.

Elsewhere in the Mourne County, Mayobridge remain top of Division One with a 2-8 to 1-12 win over CPN.

As Jody Gormley’s, Loughinisland could only play out a thirteen apiece draw at home to Ballyholland Harps.

In Tyrone, Edendork travelled to Ardboe and claimed a two point win while Clonoe beat Eglish by eight.

In other results, Carrickmore travelled to high-flying, Dungannon and claimed a one point win while Moy beat Tattyreagh as Donaghmore and Trillick played out a 1-13 apiece draw.

Meanwhile in Donegal, Ballybofey toppled St.Michael’s in a goal fest as Naomh Conaill claimed a victory over St.Eunan’s.

Ulster Champions, Gaoth Dobhair showed no signs of fatigue with victory in Milford. 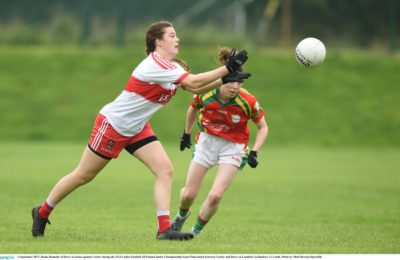