CUSHENDALL always fancy themselves as one of the contenders for the Antrim Senior Championship, but they can’t afford to get ahead of themselves as their group is full of pitfalls.

Their campaign gets underway against up and coming Belfast side Naomh Éanna this weekend before tough looking clashes against St John’s and perennial challengers Loughgiel.

They’re well-acquainted with Naomh Éanna at this stage (they claimed a 1-20 to 0-16 victory at last year’s quarter-final stage and have played them twice this year already), and Cushendall’s manager Brian Delargy knows they’ll have to be on their game to get their championship off to a winning start.

“Naomh Éanna are improving every year and have some smashing hurlers. They’re a recognised senior hurling club at this stage and that’s the way they’ll be treated going forward.

“It’s a tough group for us and we need to be our best for all three games. Naomh Éanna gave us all we wanted in last year’s championship and we’ve played them twice this year already – in the league and then in the Feis which is a North Antrim competition we entered. There’s a Cushendall man managing them – Michael McCambridge, I hurled with him in my playing days – so there’s definitely a lot of familiarity between the teams.”

The Ruairi Ógs have come out on top of one of the most celebrated hurling championships in the country on three separate occasions in the last decade (2014, 2015 and 2018).

They aren’t quite in the middle of a drought but how they’d love to knock three in-a-row winners Dunloy off their perch.

Delargy commented: “There’s always an expectation to win a championship. We won our first title in 1981 and we’ve been there or thereabouts in the meantime. I wouldn’t call it pressure, I’d call it a privilege. We won our last championship in 2018 and it’s important we get another one soon, it’s important to maintain high standards.”

Cushendall still have a good number of their players who reached the All-Ireland final in 2016, where they were defeated by Na Piarsaigh of Limerick,including Antrim talisman Neil McManus. They haven’t neglected their underage structures and Delargy says some promising young players are starting to filter into the senior team.

“We blooded a few year players last year and one of them, Sean McKenna, ended up breaking his thumb so he’s only coming back now which is a bit unfortunate as it could’ve been his second year playing senior hurling.

“There’s a few others as well. Liam Dillon wouldn’t be as young but has come onto the panel and has held the corner-back spot. In our club you’re trying to add one or two players every year and build on it. You have the likes of Neil McManus and Paddy McGill, they’re the boys with experience but it’s important not to end up overly reliant on them.”

While it was Down side Portaferry who won the Antrim league title (their first in 20 years), Delargy also says he was content with his side’s progress heading into the championship.

“We were happy enough. At the start of the league we didn’t have our county players and had a few injuries so it was tough before the ‘split’. After that we were unbeaten and we got out of it what we wanted, we found a couple of new players so we were happy in that respect.” 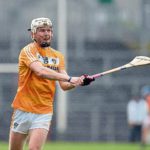 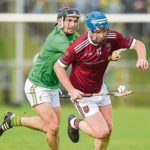 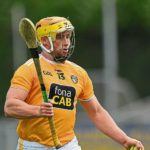