THIS eagerly anticipated clash could go right to the wire. Cargin lost their stranglehold on the Antrim title with a semi-final defeat to eventual champions Creggan last year. This is the one they’ve been waiting on, but you can’t write off Creggan either.

BOTH teams will view this as a massive opportunity to advance to the final. Portglenone justified their favourites tag with a win over Gort na Mona in the quarters, while last year’s beaten finalists Aghagallon have improved after a poor league campaign.

GLENRAVEL have had a great campaign and are unbeaten since the start of this year’s championship. Sarsfields, meanwhile, can boast a similar tale, topping their group with three wins from three before passing their quarter-final test against St Paul’s. It’s a toughie.

DAVITT’S did extremely well to claim a victory against unbeaten Glenavy in the last eight. Opponents Dunloy have had a fine campaign and qualified for the semi-finals with a two-point win over Aldergrove.

EIRE Og did well to nab a win against Laocha Loch Loa in the quarters, their third win over that team this season. Maybe they can take the next step and reach the final.

PEARSES justified their favourites tag with a win over St Agnes in the quarter-finals. St Malachy’s have also defeated St Agnes back in the group stages. A tough one to call. 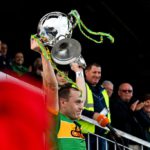 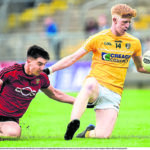 Cargin out to avenge last year’s defeat to Creggan