IT’S a great time to be Antrim camog. You can sense the excitement in the voice of defender Maria Lynn as they prepare for this weekend’s league final showdown with Wexford.

“Sure it’s great and it makes a Monday morning a bit easier, knowing you have it ahead of you,” said an enthusiastic Lynn after another day teaching at her local St Anne’s Primary School in Corkey.

“Playing in Croke Park is what you always dream of and to get there twice, so close together, it is quite a privilege to be in this position again,” she added, referring to last year’s All-Ireland final win over Kilkenny at headquarters.

There is also the added bonus of Saturday’s decider being life on RTE, giving Antrim Gaels the chance to watch their team bid for more silverware.

“That’s great for ones that can’t get to it,” Maria said. “My Granda John is 94 and he can’t go to Croke Park anymore, so it is good to see myself and my cousin Lucia (McNaughton) and everybody playing.”

There has been a chance of management since their championship win, with Paul McKillen and Jim McKernan stepping down.

“With fresh faces and new ideas, it has brought a new drive to it,” Lynn pointed out. “Dowdsie is there again and she is great. A lot of the ones through school have responded really well to her.”

The few players who retired were offset with newcomers to the panel and the varied voices in the management team have freshened up the camp.

Everyone plays their part, with different coaches taking various aspects of coaching sessions on different nights.

“It’s all flat out, high tempo, from the minute you hit the grass to nearly asking to be taken off it,” said Lynn of their new training regime.

It all adds to the atmosphere in the camp. Everyone gets on well and “digs in” when the serious work needs done, with no shortage of banter and craic to strike the perfect balance.

“When you think back to when you were having fewer numbers at training and a lot of the people who were there are still there no, so it is great to have been where Antrim was to where is it is at the minute,” Lynn explained.

The change involved many two main factors. The Covid lockdown ended any opportunity for players to jet off to see the world and camogie became their full focus.

“Also, there were a good few years with underage success when they won a couple of minor All-Irelands, those girls are senior age now too and we have hit it at the right time.”

After wins over Kerry, Galway and Laois, the Saffrons were put to the pin of their collar in last weekend’s 2-11 to 1-12 semi-final win over Cork thanks to 2-7 from Roisin McCormick.

While not knowing a lot about Wexford, Lynn knows it will be a tough battle in their first year out of the senior ranks.

“They have been playing at a level where we want to be, so the match against Cork at the weekend was a tough battle and that’ll hopefully stand to us.

“We will have go in believing we can do it. We know it will be hard work and we are looking forward to the challenge.” 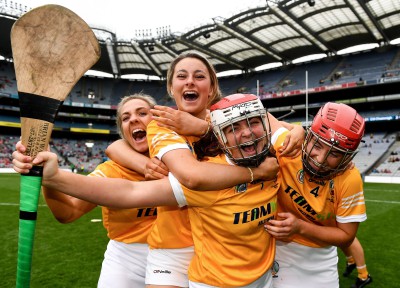