ANTRIM proved a lot of their doubters wrong according to joint manager Mark McFadden when they climbed the steps of the Hogan Stand last Sunday as All-Ireland champions. Seven-points was the margin at the end of the game and McFadden, along with Brian Kearney, couldn’t have been prouder.

“It was massive, absolutely brilliant. At the start of the year a lot of people were writing the team off within our own county saying what’s the point of this team, they aren’t going to do much, it’s just a stepping-stone (to senior level).

“Because it was interfering with the club a lot of people were saying what’s the point, let them go back to the clubs and go back to basics. To actually go and win an All-Ireland it was something special for the players.

“I think I was hugging everybody in Croke Park, it was brilliant for the girls to actually get a trophy. Anything we asked of them they gave us, and we always said let’s finish the year on a high.”

Four first half goals, including a Dervla Cosgrove hattrick handed Antrim the initiative, but McFadden insists his side knew the game wasn’t over at half time.

“It was absolutely crazy. We know if Dervla and our full forward line that day turned up it was going to be a hell of a game, but nobody could have expected that to happen.

“Armagh are a great side, and we knew they were in an All-Ireland final last year and won it the year before, they’re a great team. But we fully believed we could beat them. We ran them close twice this year, maybe the nerves got the better of our girls in the Ulster final, but we were full confident going into the match.

“We didn’t underestimate Armagh because in the game over in Dunloy (during the group stages), we were seven-points up at half time there and within 28 minutes of the second half they were one-point up on us. We knew they had the potential to come right back at us.

“Going in at half time we knew they were going to come at us, but we maybe panicked in the first half a wee bit. In the last five to ten minutes, we pulled somebody back to try and hold on to the lead. “At half time we went back to 15 on 15 again because it worked for us in the first half. We knew we had them rattled as such and it was working for us, so we said we’d go back to it.” 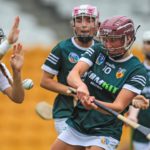 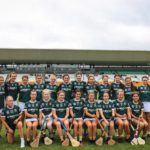