THE Antrim ladies can make sure of their place in the semi-finals of the All-Ireland Junior Championship if they secure a victory over Wicklow on Sunday.

Emma Kelly’s side sit top of the table after three matches, though some of their opponents still have two games remaining, so they’re still not totally guaranteed of their place in the last four.

The Saffrons have enjoyed a good season to date, and have shown that their surprise defeat to Derry a month ago was something of a blip as they bounced back with resounding victories over Carlow and Limerick.

On their last day out, they claimed a 5-10 to 2-7 win over the Shannonsiders and it was no more than they deserved as they were devastating in front of the goals.

Theresa Mellon, Caitlin Taggart, Grainne McLaughlin, Cathy Carey and Aoife Taggart all contributed handsomely to their winning total, and they laid the groundwork for their eventual success with three early goals.

Opponents Wicklow are going well, have won both of their matches to date – doing the business against Carlow (winning by eight points) and Limerick (a seven-point victory).

They were also boosted heading into the championship as they maintained their Division Three status with a 1-13 to 1-12 win over Fermanagh.

The players Antrim will have to keep close tabs on are Marie Kealy, who scored 1-8 against Fermanagh, and Meabh Deeney, who also regularly pops up with scorers.

Antrim will have pretensions of going all the way in this year’s championship, but this is no easy game.

A particular problem has been consistency, but with so much on the line, you’d expect at the very least a solid performance on the day. 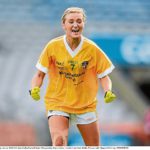