THE Antrim ladies footballers know they must make an important response to their defeat to Derry.

The Saffrons were expected to beat the Oak Leafers but ended up losing. They had a weakened squad because of injuries and Covid-19 restrictions. However, manager Emma Kelly believes there are other issues that must be addressed if her team are to beat Limerick this weekend.

“Derry was a massive blow. But it is still all to play for.

“We need more consistency. We can’t play for 10 minutes and go to sleep for 20, then come out and try to play again.

“We have never played 60 minutes of intense football, at our style. There has always been something. We will sometimes start well and then take our foot off the gas. Then we will go out of our way of playing. We will do silly things like try a kick pass that isn’t on. We try to make it too hard for ourselves instead of going for the simple.”

Yet Kelly knows how to get the best out of her team.

“We have been trying to get them to play as a team. They can’t try to win games as individuals. You need your leaders on and off the pitch, they have to be one squad and everyone is pushing everyone else on. I think a couple of the times we did go back to looking to individuals to step up, instead of thinking that we all need to step up.

“Say for example if Cathy Carey was being double-marked someone else has to step up.

“We can’t have the same person driving the ship.”

Their defence has also improved, and while they shipped two goals last week, she says they are better at stopping goals.

Kelly says there is great potential in the team. Ciara Brown is only 19 but plays like a senior player. Maeve Blaney is in her early 20s, Orla Corr is 21, the Taggart twins are 21, Grainne McLaughlin is 23.

She added that a lot of the girls have not played senior football so they are getting used to featuring at this higher level.

“A lot of the girls are learning and getting used to each other. At training it is intense. It is headache for us to pick our team. But I think we need more time. We are getting better and our fitness is showing. When we do turn it on no-one can stop us.”

Antrim are still missing a few. Saoirse Tennyson is still not fit to start having missed most of the league and the championship so far. She has returned to training which is a positive for the Saffrons.

Michelle Magee, who is also a Northern Ireland netballer, had been studying in England but is back for the summer and available to play.

Niamh Enright was isolating because of Covid last weekend but is available to play this weekend.

Anna Kearney was graduating last week, but she will be back.

Kelly expects to have a squad of 28 for this weekend. Last weekend they had a squad of 21 players and all got game time. 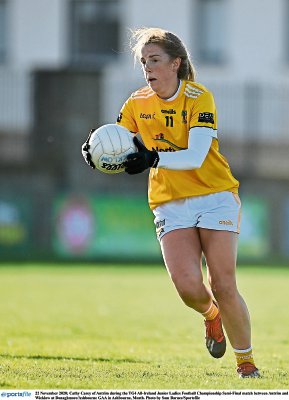 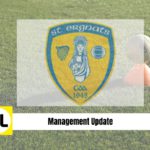 Moneyglass search for a new manager