THE safety net has gone for All Saints as they face last year’s Junior champions St Comgall’s on Friday night.

A one-point home defeat to Glenavy in their first group game has Liam ‘Baker’ Bradley’s side needing a victory to get their Intermediate Championship campaign back on track.

“We shot 23 wides,” Bradley said of a game his side didn’t fully focus on. “I think we took them lightly…we had beaten them quite easily in the league without our county players (Conor Stewart and Paddy McAleer).

“Hopefully it is a lesson we have learned and it means it’s a massive game. Friday is knock-out football, this is it for us, if we are beat, we are out.”

Bradley – who has Cookstown man Jason Quinn in the management team – also points to St Paul’s needing to beat Aldergrove to stay in the title race.

“Two of the teams classed among the favourites would be out if they don’t win,” he said.

The reward for finishing as group winners is a home quarter-final, something out of Ballymena’s hands now.

“We want to make sure we are still in the quarter-finals,” Bradley added. “If we are lucky enough to come through Friday, we will be away to the winners of Glenravel or Davitt’s who meet this weekend.”

Bradley, a former Antrim senior manager, feels the loss of Conor Stewart and Paddy McAleer impacted their league season. With both on board, he feels they could’ve been going into the championship with promotion already in the bag.

“At intermediate level, if you have two county players it is a massive boost,” he said, “but two men won’t win you a game, the rest have to perform along with them.”

Sean McVeigh, who played for Antrim under Bradley, has seen very little action due to injury this season and is expected to play a part on Friday night.

“Ronan McKillop (hamstring) would be one of the top u-20s in the county and hasn’t kicked a ball for us all year. He is back training, he probably won’t start but he will be on the panel,” Bradley said about picking from close to a full hand.

“’Pizza’ (Peter McReynolds) has been Ballymena’s top scorer for the last four or five years. He tore his Achilles off the bone in last year’s county final,” he added.

“He tried to come back three or four times, but it always broke down. He has been training the last three weeks. He came through an in-house game and hopefully he will be alright for Friday night.”

While admitting championship is their sole focus, the overall picture for the club is getting promoted to Division One for next season. Bradley shares the committee’s ambitions, believing the players can mix it at the top level.

Antrim CCC have yet to fix their play-off with last year’s senior finalists Aghagallon, who finished second bottom of Division Two. A victory would see All Saints join Moneyglass in the top flight next year.

“Where I am from, there is only one thing you are interested in at this time of the year and that’s championship football,” Bradley said.

“We certainly want to win the championship. Whether we are good enough to do that, we’ll have to see. Our aim is the big game with Aghagallon, so it would be great to do both.” 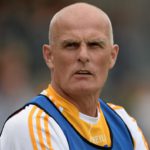 ‘Baker’ returns to a management role in Antrim 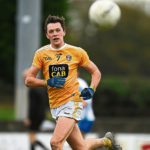