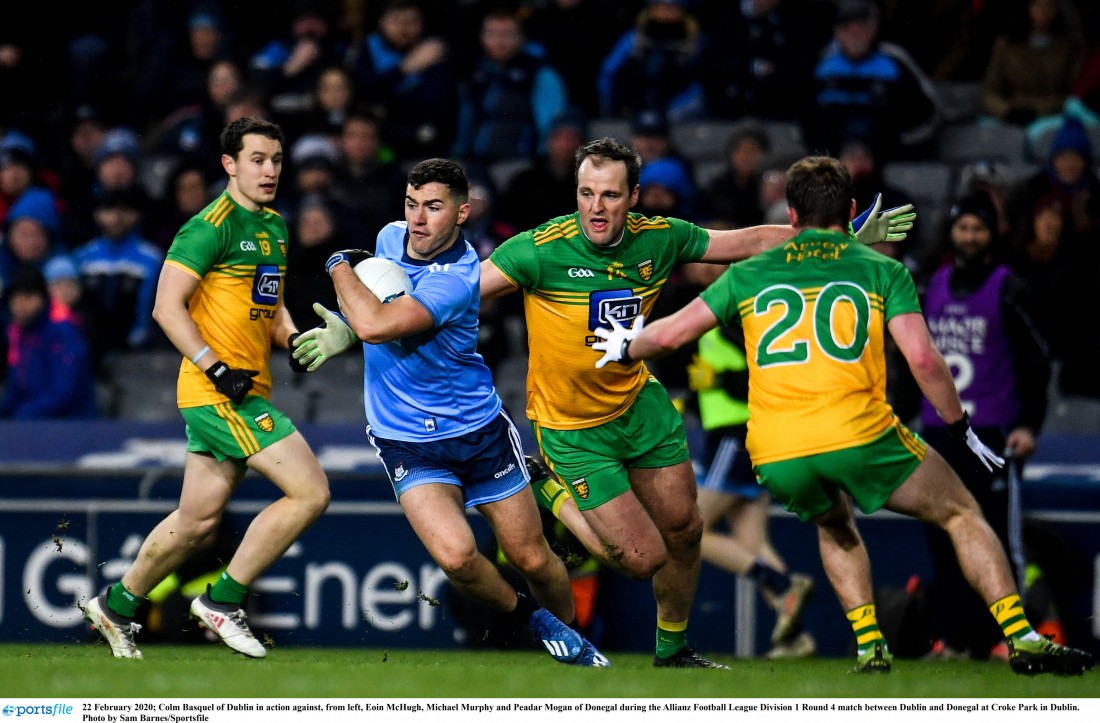 The Corofin treasurer rang me this week to see if I would do their dinner and medal presentation in March. I said “I will if you reveal your secrets to me. In 10 years Antrim will be winning All-Irelands.” “More than my life is worth Joe.”

Then, “Actually, we are presenting the medals from the last two years Joe. We forgot to present them last year.” “Hold on, hold on” I said, “Just repeat that last sentence

, I must have picked you up wrongly.” “Well Joe, we didn’t get around to presenting last year’s medals, so we have two sets to present this year.”

This is a feature of all great winning teams. Medals and accolades are neither here nor there. There is no end destination. Like a great lover, the important thing is the chase.

We see this with the Dubs. Last weekend, in a meaningless league game in Croke Park, faced by an enthusiastic and very lively Donegal team, they could easily have let the game slip away.

Donegal were four points up, then five points up, then three, then four. Yet the Dubs would not let them take a consolation victory. Like a great boxer (say Tyson Fury on Saturday night), the joy is in the contest. The better the opponent, the tougher the challenge, the more they revel in it. The point of the game, the joy of it, is in the challenge. Rising to it is what is important. The Dublin goal was identified by many as the key moment, but for me the Dubs were never going to lose this. Monaghan went seven points up in the 68th minute a fortnight earlier and we saw what is in these Dublin hearts.

As for Patton, do not feel sympathy. The loneliness of the goalkeeper is complete. No one can help him. He must be strong and happy in his isolation. He must be self-reliant and play with absolute conviction.

Having spent the first half delivering precision drone strikes off the kicking tee, his first real test of mental strength came with that high dropping ball into the square in the 65th minute. He should have punched it but he didn’t.

Instead, he lost his nerve, suffered brain freeze and did exactly the opposite of everything he should have done. He climbed to catch it, seemed to change his mind, dropped it into Paul Mannion’s hands and Mannion, who looked leggy and unfit for most of the game, but can sense the moment, palmed it back into the net for the easiest goal of his career.

This left it 1-14 to 1-11 for the Dubs and the game was done. It is the next bit that is important for Patton. Stephen Cluxton had many bad moments in his early years. I remember in particular an All-Ireland quarter-final against Armagh where he was sent off for a selfish and ridiculous kick and the Dubs collapsed. I said afterwards if I was Dublin manager he wouldn’t wear the jersey again.

Cluxton gathered himself and went on to redefine goalkeeping. Bad mistakes have become very rare occurrences, but when they have come (his short kick out against Kerry that was returned for a simple goal) he has instantly put them behind him.

Like all the great players, he truly savours the high-pressure moments. Those are the moments when he performs freely. Whether it is a last minute kick-out where possession must be retained or a last minute free to win an All-Ireland. Patton must accept the lesson and forget about the error. He is a kid in goalkeeping terms after all. We will see now what he is made of.

Donegal had started very well, with Murphy showing blinding speed of hand and thought to put Hugh McFadden through on goal. So bewitched were the Dublin players around Murphy that it took them a second to realize he no longer had the ball.

McFadden did everything right from there. He changed the angle of his solo run as he reached the ‘14’, cutting across the face of the keeper, then paused for a second leaving the defender and keeper hesitating, before planting it low to the net on the nearside. 1-1 to 0-0 after six minutes, and Rory Kavanagh turned to me and said “We still won’t beat them.”

He was of course right. They are strong and quick and tackle well and have plenty of scoring potential, but Murphy aside, they do not have the mental strength required to win at this level. Dublin on the other hand are the definition of mental strength.

There is no softness with them. They do not go easy on themselves or assume they will succeed. Players with six or seven All-Irelands spent themselves when the game went to its critical phase, tackling ferociously, looking for work all over the field, taking superb scores, diving in to flick a ball away from an opponent.

As soon as they sense they are in danger, they go to work. So, when Donegal went five up in the 30th minute, they went into overdrive, tackling fiercely and sprinting together in packs. During the next seven minutes, they restored the natural order of things, sending a message to Donegal that the task was beyond them and that the All-Ireland champions were not only going to outplay them, but were going to outwork them. By half-time, the deficit was only two and we could see the future.

Dublin reinforced the mood from the start of the second half, kicking five scores in a row from turnovers. Once again, only Murphy kept Donegal in the game, kicking two brilliant points from play and nailing an enormous free. In the first half, he was a colossus, catching, assisting, flicking on and never sparing himself. The problem is there is only one of him. Donegal have not replaced Colm McFadden or Karl Lacey or Neil Gallagher and until they do, they must be satisfied with vying with Tyrone and Monaghan for the Ulster Senior Championship crown. Dublin brought on Colm Basquel in the second half and he looked brilliant, even in this crowded Dublin field. His point was a miracle of balance and strength and pace and control, slipping through four Donegal defenders as though he had been greased with WD40 by the Dublin masseur. Sean Bugler has everything, including modesty and will be a staple of this group for many years.

Donegal played very well but when it came to the crunch time, they panicked. Two terrific goal chances were botched, both when Donegal had overlaps and the wrong pass was given at the wrong time. Declan Bonner can certainly explain to them that they are every bit as good as the Dubs, they just need to take their chances. This however would be insulting their intelligence.

The reality is that Dublin were always going to win this game.

At no point did it feel that they wouldn’t. They thrive in adversity, because like all champions, they have grown to love the championship moments.

Like a great boxer who claps his gloves in glee and excitement when he realizes his opponent is very good indeed, so Dublin are in their element when it is really put up to them.

Their comeback against Monaghan a fortnight ago was the most extraordinary thing I have ever seen on a Gaelic football field. It reminds us all that they would win a sixth All-Ireland in a row this year even if they were managed by Jim Gavin’s baseball cap. The medal presentation will be in 2025. If they remember.