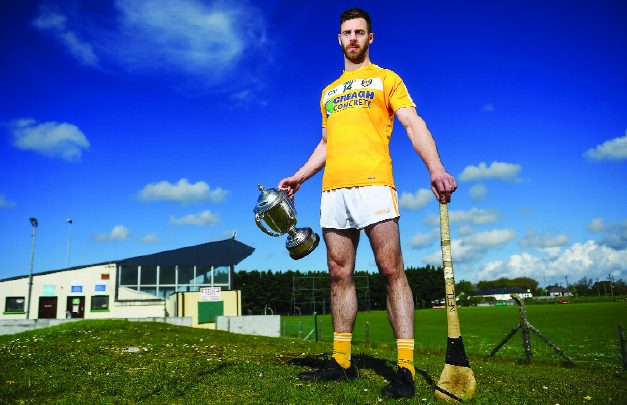 It’s half term in the hurling championships with most teams well into their campaigns and considering their progress reports. For the top three Ulster teams Antrim, Derry and Down the report will read something like “B plus- making good progress and with continued hard work to the end of the year could finish with a top grade”.

All three remain in strong contention for success with Derry and Down through to the semi-final of the Christy Ring and Antrim effectively through to the semi in the Joe McDonagh where success against Westmeath in their final game will seal their place in the final in Croke Park.

The McDonagh for the second year in succession has proved to be a very competitive and entertaining competition and Antrim deserve enormous credit for the position they now find themselves in. Neal Peden and his management team have clearly got them in good shape and at this stage their trip to Portugal looks to be paying off. They look sharp, and they impressed in their victory against a struggling Offaly who were fighting for their McDonagh survival.

Unfortunately, I wasn’t able to get to the game and had to settle for following it on Twitter and then watching it back on GAANow. Credit where it is due in last week’s column, I was critical of the GAA and their broadcast partners for the lack of coverage afforded to the competition but the use of GAANow to live stream the game is an excellent initiative. Anyone who watched the game won’t have been disappointed as it really was a great advertisement for the game at this level. Yet still it didn’t even warrant a mention in the RTE highlights package on the Sunday night. I’ve given up on hoping for anything else at this stage.
Antrim showed great heart, workrate and no little skill in getting over the line with some excellent performances all over the field. A repeat performance against Westmeath in Dunloy on Saturday could see them to progress to the final and the opportunity to compete in the Liam McCarthy. That would definitely elevate their grade to an A star and would demonstrate a real sign of progress this year.

Meanwhile in the Christy Ring both Derry and Down have advanced to the latter stages where they will face Meath and Roscommon respectively in the semi-finals this weekend. That will have been their aim at the start of the year so for managers John McEvoy and Ronan Sheehan it’s a case of so far so good.

I think Derry face the toughest challenge as they come up against Meath but there is real potential for an all Ulster final which would be great for the game in the North. Unfortunately for Donegal the standard of the Ring proved a step too far as they failed to register a win. To their credit they pushed Derry close in Owenbeg but succumbed to a hefty defeat to an improving Down in their final game. They now face a relegation battle against London where again I think they will be up against it.

Mattie Lennon and Tyrone will also be delighted with their year to date as they have reached the semi of the Nicky Rackard following victories over Mayo and Louth, their only blip being a surprise defeat to Sligo. An Ulster county in the final is assured as they will face neighbours Armagh in the semi which is sure to be a feisty encounter. So, all in all Ulster counties are faring very well in their respective competitions with five of them still in the running for silverware.

In the Liam McCarthy a clear favourite has yet to emerge though in terms of progress reports Tipperary would be top of the class. They have looked very lively in the ultra-competitive Munster championship where Limerick came back to form convincingly disposing of a very disappointing Waterford after an early defeat to an impressive but inconsistent Cork.

In Leinster no one has really set the world alight at this stage. For Galway it would be a case of could do better as they have looked a shadow of themselves without Joe Canning. Kilkenny have started well with an impressive victory over Dublin and a demolition of Carlow whilst Wexford have flattered to deceive with two draws in performances which are clearly frustrating Davy Fitzgerald.

Davy seems to be coming under a bit of pressure amid criticism within the county for the style of play he has implemented which is not going down well with the traditionalists. That will be hard for him to take given the progress he has made with Wexford and I will be very surprised if he returns next year.
Dublin could have something to say in the final reckoning as they have impressed particularly in the draw against Wexford which they should have won.

However ultimately, I think it will come down to Kilkenny and Galway.

It’s fair to say the Liam McCarthy championship hasn’t properly ignited yet. There have been flashes of brilliance, but the progress reports will reflect that there is room for improvement before schools out for summer.