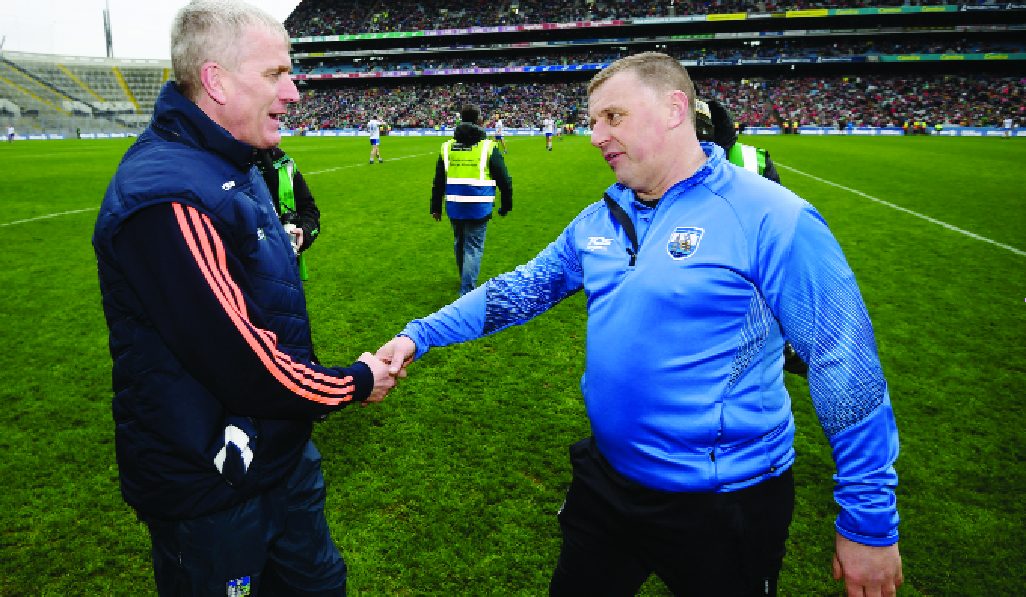 Hurling analysis in the modern game increasingly refers to systems. When a team is playing well, they gain plaudits for playing to one. When things are not going so well, they inevitably have no system at all. But what does it actually mean?

The Oxford dictionary defines a system as “a set of things working together as parts of a mechanism or an interconnecting network; a complex whole”.

Sounds complicated to me and that’s why I sometimes think too much talk of systems overcomplicates what is a relatively straightforward game when it is played the right way.

Pauric Fanning came in for a lot of stick after Waterford’s capitulation to Limerick in the Munster Championship and much of the analysis referred to the lack of a system.

Now I don’t have a clue what goes on in the Waterford set up, but I think I can safely guarantee that Fanning spent countless hours on video analysis and pitch sessions developing a system of play to get the best out of his team.

If not, then the criticism is well founded. The fact that his team didn’t carry out his instructions doesn’t mean he didn’t have a system. What they lacked was a work rate, hunger and desire which is fundamental in any strategy.

Without those key elements there is no system and teams even half a yard off the pace can be quickly dismantled.

It may seem like oversimplifying it, but work rate really is the foundation of everything in hurling. Teams can spend all the time they want in their preparations working out tactics and analysing the opposition but once they cross the white line best laid plans can quickly be forgotten and management can often be accused of having no plan.

Mike Tyson once famously said that “everyone has a plan till they get punched in the mouth”. Managers can try and implement precision hurling, playing the ball into certain areas and mapping out how they want to play but in the heat of battle, with the opposition in your face putting you on the back foot, it can be up to every player to win their own ball.

That was something the great Kilkenny teams prided themselves in where the only bad ball into the forward line was no ball at all.

I mentioned last week that the Liam McCarthy hadn’t really ignited at this stage, but it certainly sparked into life with Galway against Kilkenny. It was a humdinger of a game and I know if I was in charge of Kilkenny my system would be very simple, get the ball to TJ Reid at every opportunity. He was exceptional. The intensity of the game itself was off the scale with players on both sides prepared time and again to put their bodies on the line in pursuit of possession. They would run over their granny if she got in the way of the ball.

The same was true for Limerick in their demolition of Clare. They were absolutely ravenous for the ball with their blocking, hooking and hunting in packs totally overwhelming Clare. Like Waterford Clare will be accused of having no plan but the truth is they just weren’t allowed to implement it because of Limerick’s ferocious work rate. Doing that consistently takes enormous discipline and fitness levels which is what ultimately sets the best teams apart as they often outwork teams to earn the right to hurl.

Antrim struggled with that consistency in their campaign. The fireworks of defeating Offaly the week before raised expectations for a repeat at home to Westmeath. However, it proved to a bit of a damp squib and I am sure Neal Peden was frustrated at their inability to recreate the intensity of the week before.

Sometimes as a manager it is extremely difficult to understand why that can happen from one week to another and more often than not poor performances can be directly attributed to a lack of work rate. Whilst Westmeath were a good side Antrim will ultimately be disappointed by the fact that they didn’t do themselves justice.

On the other hand, Armagh and Down will be very satisfied with their weekends work having reached the finals of the Rackard and Ring competitions respectively earning them a big day in Croke Park which is a great boost for Ulster hurling.

Finally, I want to mention an event for a great cause taking place at the weekend. It is a hurling blitz for Primary 5 children organised by Peter Blayney (of the famous Blayney clan from Ballycran). Peter’s son Oisin tragically passed away ten years ago at the age of nine and the blitz is named in his honour with 16 teams from all over the country in attendance. It will take place at Fontenoy Park, Liatroim, County Down with John Mullane, the former Waterford great and the Liam McCarthy cup also in attendance.

All proceeds will go to Knockevin Special school and donations are greatly accepted via justgiving.com/crowdfunding/oisinblayney2. I have talked before in the column about the GAA manifesto – where we all belong. This is the type of event that demonstrates that belonging and I have no doubt it will be a massive success.