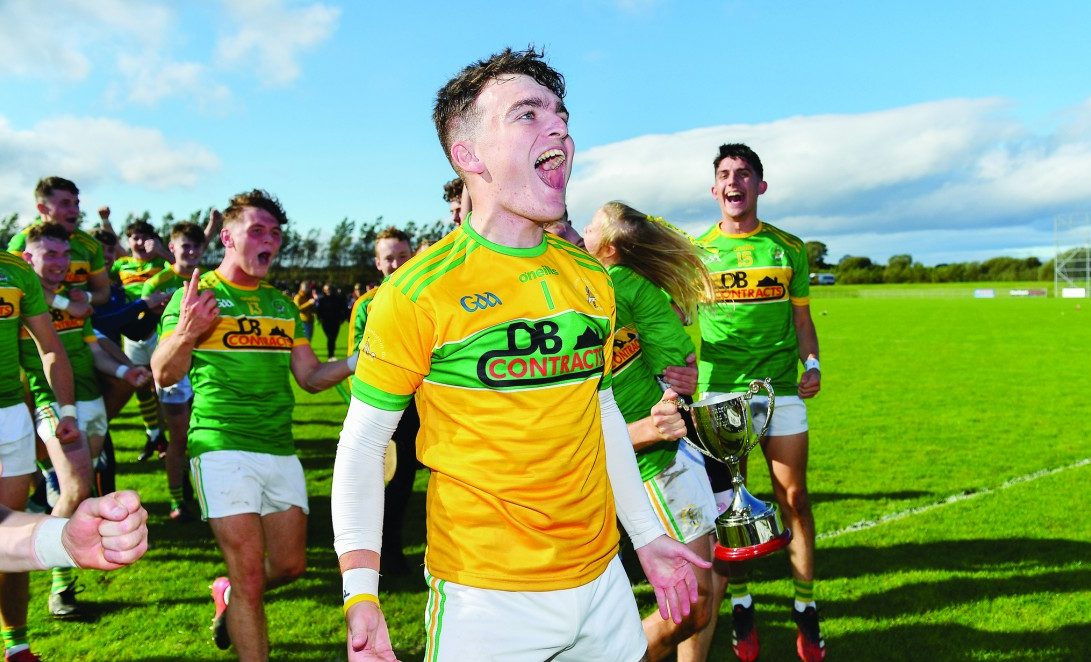 IT is possible to love and hate something at the same time. Hurling made me experience those extremes of emotion on Sunday, though a friend wisely said to me “sure what else would you be at?”

The love was triggered by the fact that my club Dunloy secured another compelling Antrim Championship success following an impressive victory over near neighbours and fierce rivals Loughgiel.

So, what’s to hate you may well ask, as for a Dunloy man it generally doesn’t get much better than that. The problem was I didn’t get to experience the game live. I had committed this year to a coaching role with Kevin Lynch’s in Dungiven who reached the Derry Championship final against Sleacht Neill.

Of course, Murphy’s Law would dictate that the two games would be on the same day, roughly the same time and at opposite ends of the North coast, one in Ballycastle the other in Derry.

Consequently, attendance at both wasn’t an option and although faced with the dilemma of which to attend, the decision to go to the Dungiven game was a no-brainer as I owed it to their management and players to honour my commitment.

The day of mixed emotions was compounded by the fact that whilst Dunloy won, Dungiven didn’t and it gave me great exposure to both sides of the emotional spectrum.

The sheer joy of a championship victory, which doesn’t diminish regardless of frequency, contrasted with the sheer devastation of defeat, which also never diminishes and lingers for a considerably longer time.

Regarding the games themselves. The Dunloy players and management, particularly Gregory O’Kane, deserve enormous credit for producing such a comprehensive performance on the big stage with the eyes of the country on the Antrim final again with the game being covered live by TG4.

By Gregory’s own admission, the team had not been firing on all cylinders in this condensed year but showed tremendous grit and determination during the group stages, and especially in the semi-final against an excellent Rossa side, to get the game over the line.

We all suspected there was a big performance in the team and thankfully it came out on the biggest day of all. Everyone in Antrim is well aware of the hurling ability of this group of players but what was most pleasing about this success was their ability to dig deep and grind it out when they needed to all year.

That’s hard to coach and clearly Gregory has embedded that mindset into the group. It’s a great pity that this year that is where it will end and Dunloy won’t get to challenge themselves again on the Ulster stage where Sleacht Neill would have been waiting yet again.

And now to the Derry final where I got to witness Sleacht Neill in action up close on Sunday at a very windy Celtic Park.

In truth the wind destroyed the game as a spectacle but Sleacht Neill impressively absorbed everything Dungiven could throw at them when wind-assisted in the first half to go in level at half-time.

Dungiven came out of the blocks quickly after the break to go two up but from there on Sleacht Neilll took total control. Their strength in the tackle and composure on the ball demonstrated why they are Ulster champions with serious aspirations of an All-Ireland title.

I am sure they will be disappointed not to be defending their title as another matchup between them and Dunloy would have been a huge draw for spectators. That may come another day but for now attention turns to the inter-county game after the club championships which have helped to lift the gloom.

My other reflection on the weekend was one of mixed emotions concerning the crowds at games. Whilst it is great that a limited crowd continues to be permitted to attend the games, such limitations brings a huge challenge for clubs in terms of ticket allocations.

How on earth do you do that fairly without alienating some hard-working members and supporters? The answer is you don’t.

Both Dunloy and Loughgiel have a large fanbase and any allocation process is in serious danger of leaving a sour taste with those not successful in getting a ticket. The respective club committees faced an impossible task with it being the classic case of ‘you can’t do right for doing wrong.’

Perhaps for such games the only fair way to avoid the inevitable bad feeling would have been to adopt the approach of the South and ban all spectators.That is an even more unpalatable position to most people, and I am sure all clubs who reach the latter stages of their respective championships are more than happy to manage their allocations as fairly as possible rather than have no one at the games to experience the elation success can bring to their communities. Dunloy and Sleacht Neill know what that feels like once again whilst Dungiven and Loughgiel will dust themselves down and go again. Sure, what else would you be at?