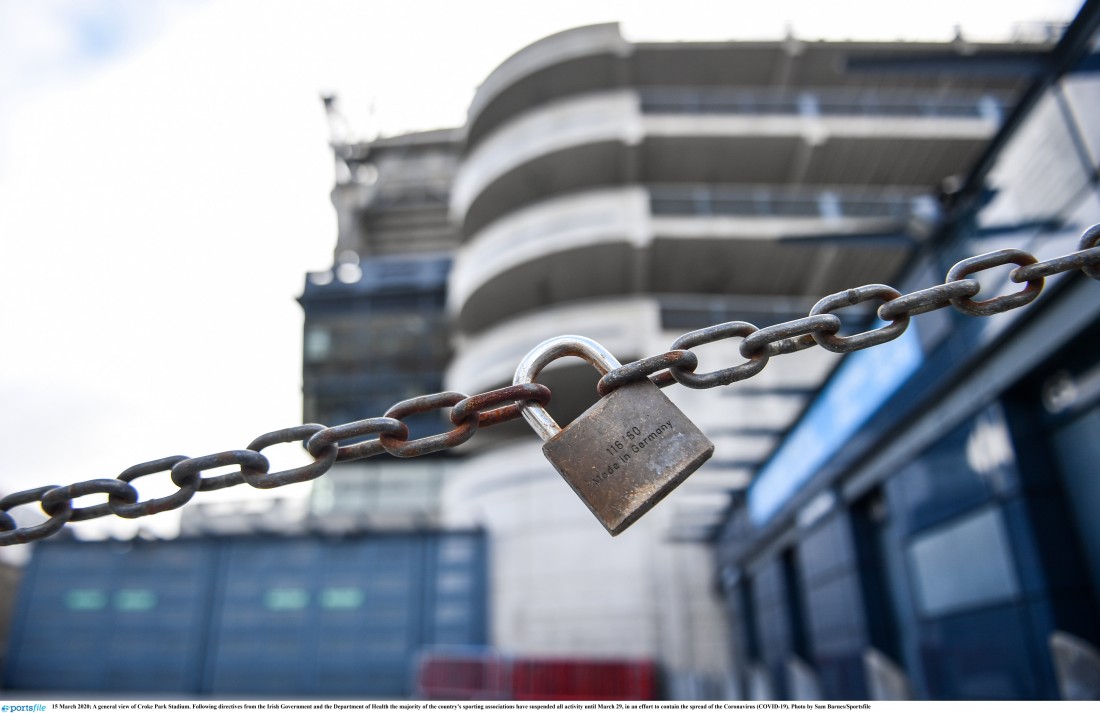 WE are all familiar with the phrase in sporting terms “cometh the
hour, cometh the man.” Basically, it means that in the big moments of
games big players will step up. Your leaders will come to the fore
when the pressure is on.

Given the times we are in the quote could read “cometh the weeks,
cometh the people” because as a society we have never needed to step
up more than we do now.

I have no intention of preaching about the importance of social
distancing and our need to behave appropriately for the greater good,
but I do want the theme of this column to be about the value of
leadership.

A couple of weeks ago in the column I commended the GAA for their
decisive actions in relation to Covid-19 and I have to say I think we
will look back on this period as being the Association’s finest hour
such is the leadership they have shown.

Whilst this current situation is far from easy for us all, we do
sometimes need to step back and have some perspective. What we are
being asked to do is very little when you think of one of the great
leaders of our time, Nelson Mandela, a man who spent 27 years in
solitary confinement and came out with not a hint of bitterness to his
jailers. What he wouldn’t have given for a walk outside and a trip to
the shops for essentials.

In times of crisis, be it in sport or life, strong leadership is
crucial. I have looked on in sheer disbelief at the so-called
leadership of Johnson and Trump wondering how on earth the electorate
of the UK and US could allow that to happen.

In many walks of life there is an increasing move towards what is
referred to as collective leadership, which effectively means everyone
working together in pursuit of the same goal. That is what constitutes
a good team as opposed to the older hierarchical style where the boss/
manager dictates and everyone else follows.

The younger Millennials don’t buy into that style of leadership
anymore, which may explain why the likes of Jose Mourinho seems to
have lost his Midas touch.

When you look at the great GAA leaders over the years it’s not hard to
see what sets them apart. Invariably the great players and managers
make the right decisions in the pressure moments and don’t shy away
from responsibility.

They do what needs to be done by saying and doing the right thing, be
that a tactical switch, a half-time team talk or taking a shot on when
the game is in the melting pot. In order to be a leader, it is
important to have the trust and respect of the team otherwise those
around you are less likely to follow. Often in sport that comes from
having walked the walk.

However, whilst collective leadership is the way forward there will
always be those who prefer to follow and it’s important to emphasise
the fact that it doesn’t make them any less of a team player.

Men like Brian Cody, Liam Sheedy, TJ Reid and Seamus Callanan have
earned the right to be viewed as leaders through their actions. In the
current crisis it is the often-maligned administrators who I feel have
demonstrated exceptional leadership. They often get bad press, accused
of being detached and not in touch with the grass roots but throughout
Ireland at national, provincial, county and club level they have done
us all proud with the example they have shown through ceasing all
activity, offering support to their local communities and handing over
their facilities to the Health service.

Having said that, many challenges lie ahead of them when we come out
of the crisis, not least fixtures.

I really hope they adopt a sensible, pragmatic and realistic approach
to what is possible when life starts to return to some degree of
normality. Of course, the approach will be dictated by the timing of
it all.

There is some talk of playing a knockout championship, which I think
is increasingly likely. However, that could even be questionable
especially at inter-county level where I imagine there will be a
reluctance from the authorities to allow large gatherings of people
for some time to come. 80,000 people in Croke Park for an All-Ireland
final may not be a realistic option even in August or September but
only time will tell.

Whatever the outcome we should trust the Association to make the right
decisions. In managing the crisis, they certainly have to this point.
Speaking of leaders, I want to send a message of support to the family
and friends of Niall Murphy from Naomh Eanna, Glengormley who is
currently seriously ill fighting Covid-19. I actually spoke to Niall
the day the GAA ceased all activities as he was organising his club’s
celebration dinner in the Europa Hotel and had approached me to
interview their special guest Davy Fitzgerald.

When he asked me, within 10 minutes he had sent me about 100 WhatsApps
detailing the history of the club and its monumental and sometimes
tragic history. He is an inspirational figure in the GAA, a highly
respected legal professional and most importantly a devoted family man.

I know he will use all of his renowned fighting qualities to overcome
this and demonstrate once again the great leader that he is.
comment@gaeliclife.com