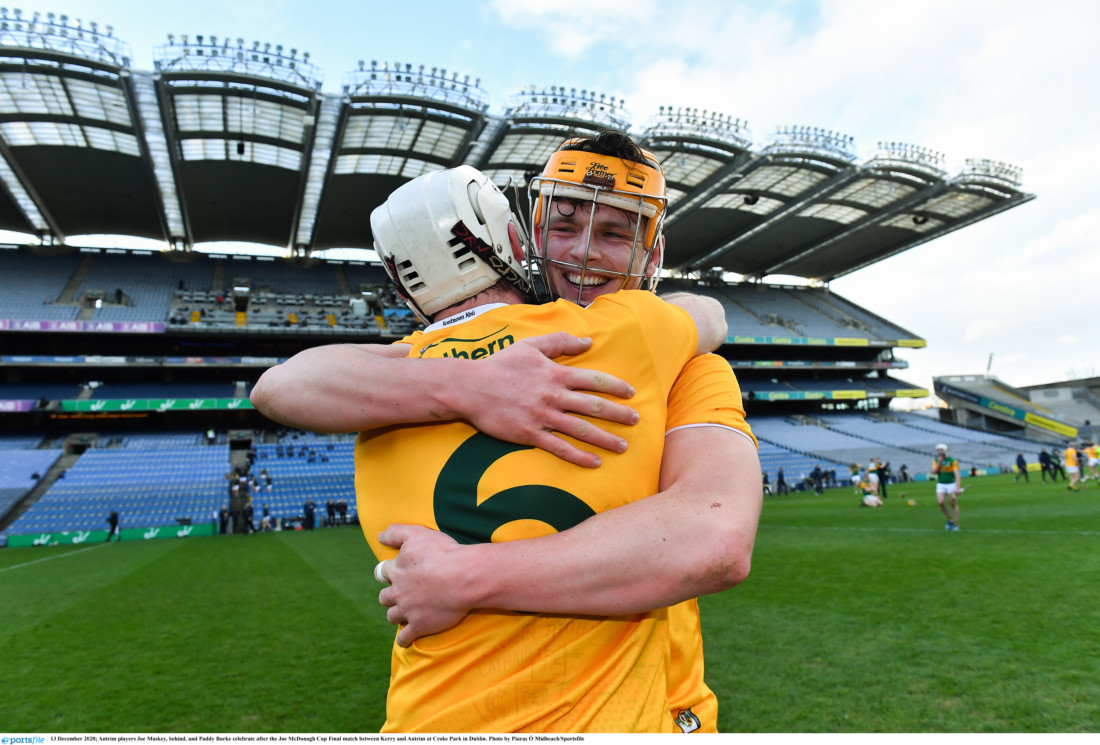 I THINK it is fair to say that 2020 has been a year to forget and one we are all keen to put behind us as we move with a little bit of optimism into 2021.

However, from a hurling perspective in Antrim, at both club and county level I think it has been a year to remember and merely whetted the appetite for more of the same next year.

The club championship was as competitive as it has been for some time. There were cracking games throughout and next year promises to be a really open championship which augurs well for the overall state of the game in the county.

That anticipated rise in standards at club level will be music to the ears of county manager Darren Gleeson given the success of the county team this year. They have just had their most successful year in recent times culminating in the Joe McDonagh victory over Kerry at Croke Park.

The win has elevated them to the lofty heights of the Liam MacCarthy next year and following on from their recent league success in Division 2A, means they are dining at the top table in both league and championship in 2021. A good year’s work by anyone’s standards and great credit to the work of Gleeson and his backroom team.

Whilst Sunday’s victory was hard fought and nervy at times, the bottom line is that finals are for winning and Antrim dug deep to eventually overcome a dogged and determined Kerry who had clearly set up to nullify the scoring threat of a potent Antrim forward line.

Their victory showed the power of the panel as all of Gleeson’s substitutions had an immediate impact with Neil McManus, Domhnall Nugent, Conor Johnston and Conal Cunning all contributing at vital parts of the game to get Antrim over the line. It is a bit clichéd, but it is no longer a 15-man game. Substitutions that can make an impact are very often the difference between winning and losing.

Special mention to Niall McKenna whose surging runs caused Kerry constant problems and Mattie Donnelly at full back who recovered from an early error, to be a colossus at the back, repelling attack after attack.

The sour note of the day for me was the RTÉ coverage and particularly the commentary of Donal Óg Cusack. It was disappointing that his very first thoughts at the final whistle were to criticise the standard of the game and question Antrim’s ability to compete at the top level next year.

Don’t get me wrong, as a pundit he is perfectly entitled to his opinion and indeed paid to express it. However, I just thought his timing on what was a momentous day for the county was very poor.

Speaking of bad timing the broadcaster itself should hang its head in shame for cutting to a commercial break just before captain Conor McCann’s speech. The action was a bit like Cusack’s comments, disrespectful and ill thought through. You can be sure it would never have happened before the Limerick captain’s speech.

The All-Ireland final that followed was in truth a little bit of an anti-climax as the result never looked in any doubt. From an early stage Limerick looked a class apart and although Waterford deserve enormous credit for hanging in there as the Green Machine moved through the gears.

This Limerick team are very easy on the eye and with ball in hand are right up there as one of the most talented group of players I have ever seen. From goalkeeper Nicky Quaid to Graham Mulcahy at corner-forward they are all extremely comfortable on the ball with supreme touch, vision and an unrivalled ability to make the right decision under pressure.

But coupled with all that, like all the great teams in any sport they have a relentless work-rate and whilst they make their own scores look easy, the opposition have to fight and scrap for everything they get.

They are a team who could go on to win six or seven All-Irelands, I think they are that good and it is hard to see, given their dominance this year, who is capable of knocking them off their perch next season. They don’t have any obvious weaknesses; their size and physical conditioning is off the scale and their use of the ball is like watching the Harlem Globetrotters at times.

The other top tier counties, with Antrim now amongst them, will already be plotting how they can get to that level. That is no mean feat as they also have an age profile that suggests they are here for the foreseeable with players like Geraoid Hegarty, a shoo-in for Player of the Year, Kyle Hayes, Cian Lynch and Aaron Gillane not even at the peak of their powers.

It’s a great time to be a Limerick supporter. Having said that it’s also a great time to be an Antrim supporter and whilst it is fair to say silverware next year is highly unlikely, watching the county competing with the Limericks of this world is something to look forward to.

Given the year just gone we all need that.

Happy Christmas to all and best wishes for a New Year that will hopefully bring a change of fortunes in our lives but some more of the same for hurling fans.