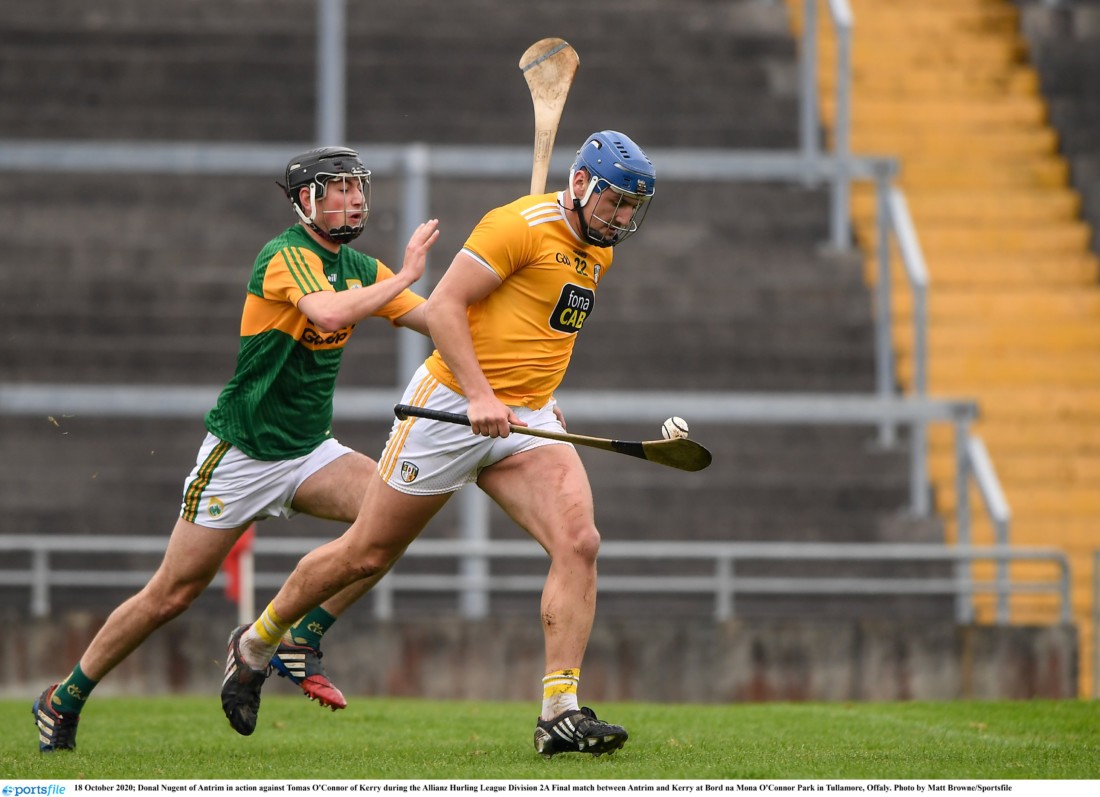 18 October 2020; Donal Nugent of Antrim in action against Tomas O'Connor of Kerry during the Allianz Hurling League Division 2A Final match between Antrim and Kerry at Bord na Mona O'Connor Park in Tullamore, Offaly. Photo by Matt Browne/Sportsfile

IN these crazy times I increasingly subscribe to the mantra that ‘no news is good news.’ Primarily because we seem to be caught in an endless cycle where ‘all news is bad news.’

Whichever way you turn, the doom and gloom merchants are there, particularly in the media in all its forms. Be it Covid-19, lockdowns, economic recession or throw in Brexit for good measure, it’s hard to find any real positivity in the world at the moment.

The media and the message it conveys is chronically pessimistic. Consequently I have found myself actively avoiding the news because it frustrates the life out of me to watch the increased polarisation of society fuelled by poor political leadership and a media that needs to get much better at holding people in power to account for their words and actions.

As for our local media, I stopped listening to Stephen Nolan a long time ago and consequently missed out on his show trying to castigate the GAA and infer that it has in some way been responsible for the worrying spread of Covid- 19 because communities were guilty of celebrating their championship success.

I don’t recall the same focus on the great cross-community work of the Association in helping to sustain the overall well-being of their communities at a time when God only knows it is needed. Of course, I am not naïve and totally understand that such positive stories don’t fit with the sensationalism and deliberate divisiveness of an agenda aimed at inflaming the debate and creating the headline. More so than ever we are crying out for a wee bit of optimism and positivity to bring some much-needed balance to it all.

That is why I hope the GAA and the government do everything in their power to keep the inter -county show on the road. People need something to look forward to and something else to talk about that brings some joy to their lives, although clearly a balance needs to be struck with the risk of spreading the virus.

Like many, I seriously hope they can find a way to do that. The club championships were a huge success and who can blame communities for getting caught up in the emotion of it all? For many it will sustain them over the difficult winter months to come. For those who are quick to condemn the emotional scenes, a proper appreciation of the passion people have for their clubs and communities might help them understand why it may have happened.

Thankfully, positivity was the order of the day for Antrim hurling following promotion to the top tier of league hurling following an impressive performance against Kerry in the Division 2A final at Tullamore, which I was fortunate to witness first-hand.

Following on from the news about Casement Park it was a good week for the county. In keeping  with the positive vibe, I will be forgiven for not mentioning the football result as this is a hurling column!

Antrim will now go into the Joe McDonagh competition brimming with confidence safe in the knowledge that 2021 will offer the opportunity to play at a higher level. In terms of the development of this young team the benefits of that cannot be overstated and Darren Gleeson will know full well the huge benefits of playing against the best on a more regular basis.

Personally, I think Antrim are better placed to compete at that level than they have been in a while. The age profile of the team is just right, and they are in better shape physically with big mobile men all over the field. The likes of Joe Maskey, Gerard Walsh, Keelan Molloy, Domhnall Nugent and Conal Cunning are more than equipped to play at a higher level.

Against Kerry they played a very fluid brand of hurling with good purposeful use of the ball all over the pitch. The movement of their full forward line ,especially  Conal Cunning and James McNaughton, was very impressive but the heads-up ball delivery from the middle third was great to see.

Good movement and creating space up front only works if the ball is played in at the right time and into the right area and Antrim’s half-backs in particular did that very well. All in all, there is plenty to look forward to for Antrim hurling enthusiasts in the next few months.

Meanwhile in the all-Ulster Division 2B final it was good news for Down who overcame old adversaries Derry by five points. Like Darren Gleeson, Ronan Sheehan will be looking forward to testing himself and his players at a higher level. It is a great pity that both teams couldn’t go up as having witnessed Meath and Mayo in Division 2A this year, they are more than capable of competing at the next level.

It is strange to be talking about inter-county competition as the evenings shorten and the temperature drops, and I just hope it helps to lift our spirits in the same way the club competitions did.

Whatever happens I plan to avoid the naysayers and the energy vampires who will look for the negatives and any excuse to put the boot in. My parting advice would be, if you don’t read it or listen to it, I guarantee you will feel all the better for it.