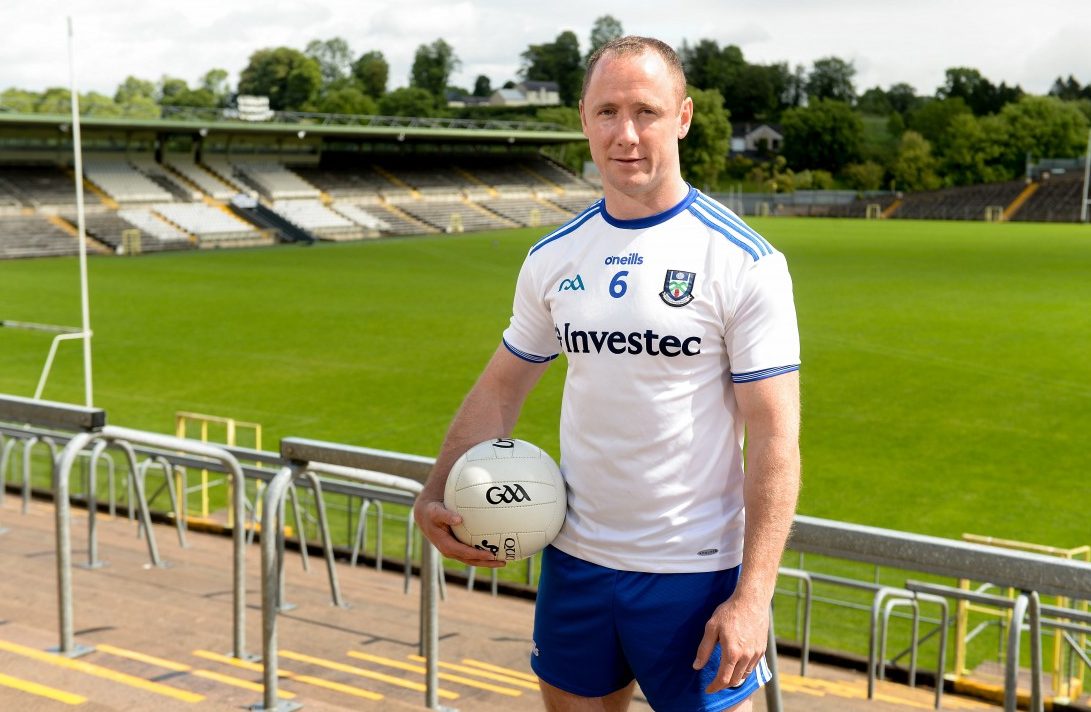 Kevin Cassidy: Let’s get straight into it, why was now the time to retire?

Vinny Corey: It just felt like the right time to go Kevin. With new management in place, I felt that they would want to build their own team, and investing precious game-time in a 37-year-old who probably wouldn’t be there over their three-year term would be a big ask. Also with the county season condensed now and less recovery time between big championship games, it’s harder on the body. At the minute I’m happy with the decision but I know when the New Year comes I’ll probably miss it, especially the big games.

KC: Tell me about the time you got your first call up to the Monaghan county squad, how did it feel?

VC: The first call-up doesn’t really stand out but I remember being handed my championship debut like it was yesterday. Colm Coyle was the manager with Declan Brennan and Noel Marron. It was my first year on the panel and we were training in Carrickmacross the Tuesday before playing Armagh, who were All-Ireland champions, in the first round of the championship. I had gotten a bit of game time in the league but not much and it was in the forward line. After training I had to tell Colm I wouldn’t be at training Friday as I had exams in Maynooth. He was very approachable and just said be ready for Sunday. I didn’t think anything of it. After training we sat in the dressing rooms and he named the team. I only remember the first two names, Shane Duffy in goals, Vinny Corey…. I was in shock and I think everyone else was too. Whoever was sitting beside me kept elbowing me to make me laugh. I couldn’t believe it and I wouldn’t have been able to tell any one of the rest of the team as I didn’t hear another word. I never slept a wink that night. Full of adrenaline and excitement. It was a brave move from Colm. Luckily it worked out.

KC: What were your darkest days in a Monaghan shirt?

VC: We’ve had a few dark days as a team. Defeat is always hard but especially games that you are expected to win. We’ve lost such games like that over the years. A few that come to mind are Fermanagh in 2008, Longford in 2016, Down 2017, Fermanagh 2018, those defeats hurt. The only thing I can say is we kept bouncing back and usually won the next game.

KC: Now tell me about your best ever day, and why did it mean so much to you?

VC: There were a lot of good days and special memories. My debut beating Armagh when we were a Division Four team, winning the Division Two league in ’05 after beating Meath in my first time playing in Croke Park with the supporters invading the pitch after. However, winning my first Ulster title in 2013 has to be number one. We had been pushing for so long with plenty of disappointments. It was my 11th year with Monaghan and I had doubted if we’d ever make the breakthrough. When Tommy Freeman scored the point near the end I remember looking at Dessie and thinking we’re actually going to do this. He was thinking the same. It was overwhelming when the final whistle went. The 2015 win was satisfaction but 2013 was euphoria.

VC: Malachy was brilliant, so were Leo McBride and Ryan Porter. They complimented each other really well. Over the years the Monaghan selectors were invaluable to us as well, the likes of Finbar Fitz, Owen Lennon, Collie McAree. Under Malachy it was a very healthy environment. He had a great way about him, he was very approachable and put players at ease. At the beginning if he had a message he wanted to get across before a big game he would do it through a parable or a short story. They were great years.

KC: Coming from a man who has had disagreements with almost every manger I have played under, did you ever experience any of that during your Monaghan days?

VC: Sorry Kevin, you’re on your own there! No I can’t remember a similar situation in Monaghan.

Obviously players have been dropped over the years but never a talisman or a key player. There were robust conversations and disagreements surely but luckily everything was kept in house. I think, by in large, the Monaghan players were easily handled.

KC: With the club scene being so competitive in Monaghan like most counties, did that ever cross into the county set-up or how did you deal with that sort of thing?

VC: No in fairness I don’t think it ever did. There would be rivalries surely but there was always respect and there were no cliques on the Monaghan team. I can’t remember club football causing any bad blood in the Monaghan dressing room but there’s no doubt that county loyalties went out the window when the club championship was on.

KC: Don’t take this the wrong way as I know it’s difficult to do, but from the outside looking in I believe that Monaghan, particularly under Malachy when you won a few Ulsters, maybe under achieved on the national stage given the talent that you had. Would you agree and if so why do you think that was?

VC: Yes the records will say we haven’t won an All-Ireland and we only reached the semi-final once so on the face of it that’s not a great return. However, if you give it some context, our quarter-final draws were never easy. In 2007 we lost to Kerry who went on to win back-to-back All-Irelands. We’ve lost to Dublin twice who have just won five in-a-row and we’ve lost to Tyrone twice. In 2018 we played three ‘Super 8’ games and were unbeaten in all three. The All-Ireland semi-final against Tyrone was the biggest disappointment. One point away from an All-Ireland final is hard to take.

KC: Which player did you hate to play against?

VC: I got a roasting from Paddy Bradley in ’05 and Conor Laverty in ’12. I wouldn’t like to see either of those two boys again.

KC: I know you have played in almost every position on the pitch but If given the choice where would you play Vinny Corey?

KC: Can you ever see yourself going down the management route or have you any ambition to do so?

VC: Yes I’d say I’d definitely give it a go. Either that or coaching. I don’t know if I’d be any good at it or what level I’d manage at but there’s not many other options when you retire from playing. It’s an inferior existence. Playing is where it is at.

KC: What’s the main difference you found from playing county football in your first year to playing in your last season?

VC: Probably the most noticeable difference is the conditioning of players nowadays. When I first started a lot of people would have been sceptical of gym work and you were nearly told to stay away from it. “It will slow you down,” you were told. When you did do gym work then it was more to bulk up.

There’s better education around it now. Players now are very mobile and athletic from a young age. On the pitch the biggest difference is the role of the goalkeeper.

The big emphasis when I started was the midfield battle and break ball. Nowadays it’s more about retaining possession from restarts and if it is kicked long there is a method to it and where players are positioned.

It’s very tactical now. The big tactic when I started was taking the corner-forward out to play as a sweeper or third midfielder to leave more space inside. Innocent times.

KC: What do you make of all these constant changes that they keep making to our game?

VC: Since the emergence of social media the game has changed almost beyond recognition. It seems if there’s enough outcry then the GAA have to respond. I wouldn’t agree with the amount of changes to the rules. I’m definitely not a fan of the advanced mark. I don’t think catching a 20-metre pass on your chest is a skill worthy of a free shot at goal. I’d much rather see the play develop with quality tackling, maybe a block or the forward scoring under pressure. Any rule that reduces the amount of scores from play can’t be a good one. The sin-bin rule will lead to lulls in games. If it’s implemented the same way it was in the league this year teams will run down the clock until the 10 minutes is up since injury time is not included. Players will feign injury and keep possession until they return to 15 players. Maybe they’ve tweaked that since the league, I’m not sure. It will be interesting to see how it impacts club football this year. I am a fan of the midfield mark though.

KC: Tell me something interesting about Vinny Corey that not a lot of people would know?

VC: I worked part time in McDonald’s in Monaghan town for six years when I was younger. I started off on the tills but got caught giving out free food to my friends so they kept me in the kitchen after that. I wasn’t bad at flipping burgers in fairness! Working there definitely didn’t put me off the food.

VC: It’s probably my favourite day of the year. Up early and get into town to get a few last bits. Then relax and walk around town to soak up the atmosphere. Probably watch a Christmas movie with the children and go to mass in the evening. We’d go up to the crib after to say happy birthday and take some blessed straw for a bit of luck in the year ahead. Then it’s home to make sure everything is right for Santa coming and put the children to bed. It’s great to see the excitement in their faces. Brings it all back.

KC: Where does Vinny Corey see himself in 10 years’ time?

VC: In 10 years I’d like to be still involved in football in some way, Maybe coaching juveniles or managing teams. Hopefully not too many aches and pains from the football days and the family have a full bill of health.

KC: If given the chance would you start your career over again and do it all again?

VC: Of course I would. It was a great lifestyle. I was blessed. Football has enriched my life.