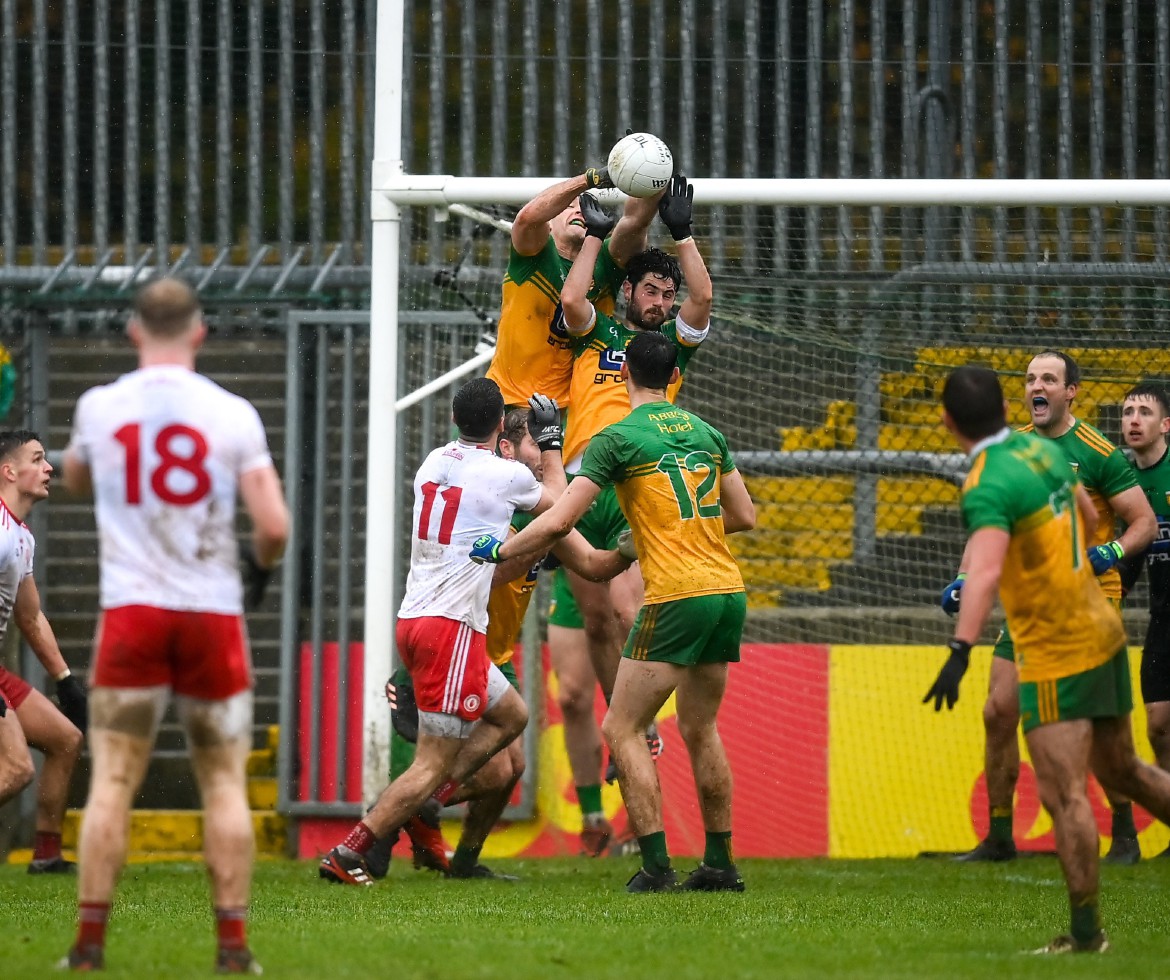 BATTLEGROUND...Donegal and Tyrone face off in a must-win game for both teams

THINGS went up a notch or two last weekend with the latest round of National Football League fixtures.

The table is starting to take shape with a few teams lingering at the bottom who now seem to be in serious bother.

More pressure was heaped on Dessie Farrell‘s Dublin team after suffering their third straight defeat, and now they lie rooted to the bottom of the table.

Even though they failed to take maximum points at the weekend, Armagh lead the way in Division One as they have proven to be the most consistent team so far this season.

Elsewhere, Donegal are coming under a little bit of pressure after suffering a heavy enough defeat to Kerry down in the Kingdom, and now this weekend’s game with Tyrone takes on a life of its own.

First of all, let me say that the weather was simply atrocious last weekend and credit must go to all players who managed to turn in any sort of performance given the underfoot conditions and brutal gale force winds and driving rain.

I was in attendance in Omagh for the clash of Tyrone and Kildare and although there was a serious doubt hanging over the game due to the state of the pitch, once the game got underway we were served up a classic.

The noise before the game was all about how Tyrone would struggle minus their four suspended players and also the injured Mattie Donnelly and given how well Kildare have played it looked like they would take the spoils.

Kildare started extremely well and the first 15 minutes they tore Tyrone to pieces, with Daniel Flynn pulling the strings.

Tyrone gradually got to grips with things and going in at half time even though they trailed by a few points, I fancied them to do the business.  They showed more grit and determination as they came out with all guns blazing in the second half with the exceptional Darragh Canavan setting up an early goal.

Kildare struggled badly in the second half to create any meaningful chances and when Darren McCurry blasted home the second goal the writing was on the wall. Tyrone fully deserved their two points.

With them now sitting on three points in the table alongside Donegal, it makes this Saturday night’s clash even more interesting.

As part of our TG4 coverage on Sunday, we covered the first game from Killarney. Before the game, I didn’t hold much hope for Donegal going down there given that we were missing the likes of Michael Murphy and Michael Langan coupled with the fact that Kerry seem to be on fire at this moment in time.

Donegal actually started well and held their own but once Kerry pressed them high up the pitch they simply had no answer to Kerry’s physicality in the tackle. They turned Donegal over time and time again as they ran out of convincing winners.

Donegal came in for a lot of criticism after the game but, to be honest, I think that is a little unfair as going down to the Kingdom at the best of times is difficult never mind being without your two top score-getters, Murphy and Langan.

Neighbours Armagh and Monaghan played out a draw which was probably a fair result. A lot of talk and debate has gone on about Rian O Neill’s penalty but sometimes you just have to roll with those sort of decisions because the ball was struck with such venom and that was hard for the umpires to see if it had actually crossed the line or not.

Armagh will be happy with where they are at this moment in time as they have put back-to-back performances together for the first time in a number of years so this must be pleasing for Kieran McGeeeny.

‘Banty’ will be happy enough with Monaghan’s display, but they now have a few important games coming up back to back where they will need to gather some points.

It will be hard to finish off this week without giving a special mention to Rory Gallagher (inset left) and Derry who are absolutely flying at the minute.

I mentioned here a number of weeks ago that I attended the McKenna Cup clash between Donegal and Derry and I named Derry as a team to watch this year.

Rory has been building nicely over the last number of years and they have a number of super footballers in the ranks like Shane McGuigan, Conor Glass and young Ciaran McFaul so perhaps this is the season where we see Derry return to the top table in Ulster.

They have all but confirmed their place in Division Two with three wins so that will absolutely delight the Derry supporters as they look forward to a long summer.

Back to this weekend’s clash of the round, which is undoubtedly the meeting of old rivals Tyrone and Donegal who face off on Saturday night. Now that Tyrone have moved on to three points alongside Donegal, this is a must-win game for both teams.

Tyrone will welcome back their four suspended players and perhaps we might also see Mattie Donnelly make a return so confidence will be high in the Tyrone camp this week.

For Donegal the hope is that Murphy may be available to play some part at the weekend and Declan Bonner will also be hoping that Langan can make a return because, being honest, without these two players last week Donegal struggled to create any meaningful chances.

Donegal haven’t lost a league game in Ballybofey since 2010 so Declan Bonner will hope that this trend continues this weekend.