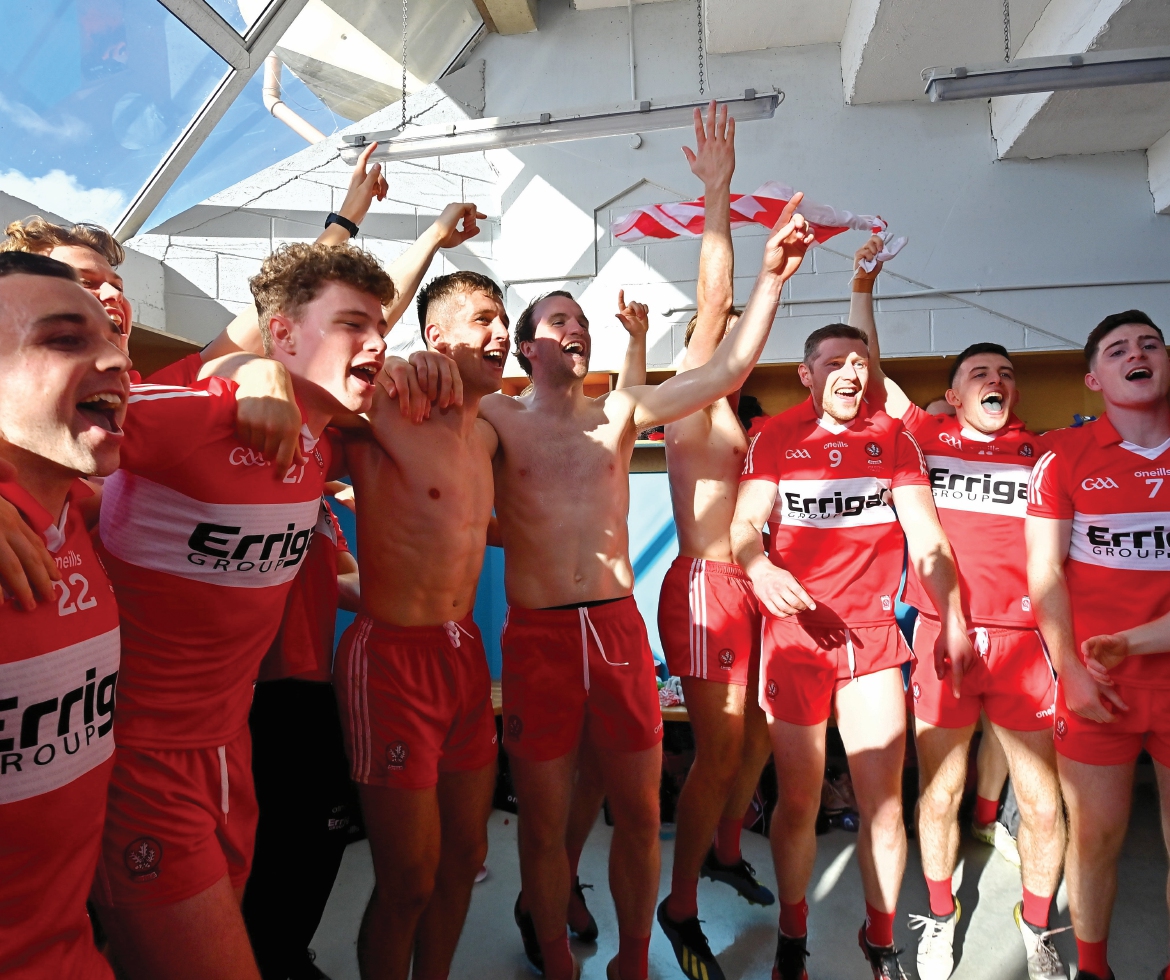 NEXT STEP….Derry have won Ulster and will now fancy their chances of going further in the race for the Sam Maguire

This weekend the action really warms up as the eight remaining teams step into the arena. Before looking at the fixtures this weekend it’s important to point out that we have had a very successful championship so far this season.

When we look at most games they have been competitive and with the addition of the Tailteann Cup, the so-called weaker teams have had more of a meaningful season.

The restructuring of the championship will take a few years to fully get right but I do believe that we are on the right track and with a few tweaks here and there then it could be perfect.

Although there are a number of massive games this weekend, here in Ulster all eyes are on Derry and Armagh. Derry head into this week’s game coming off the back of their most successful season in a long time and confidence must be sky high in the county.

As explained in my previous articles, Rory Gallagher will have every opposition dissected with a file tucked away on each team should he cross their path, so this weekend is just another box to tick from his point of view. For Derry football this is a massive opportunity and they have a real chance here to go deep into the All Ireland race. Although they will never discuss it collectively, you can be sure that all the players and management have looked at the path and have day-dreamed about what might be!!

From a playing point of view I think they have just had the right amount of time between their historic Ulster final win and their quarter final tie. When a team wins their province for the first time in a number of years they can be caught cold the next day out.

Management needed enough time to get their feet back down on the ground and I think Derry have had that time. Rory will never take an opponent for granted and I fully expect Derry to turn in a professional display and book their place in the last four! Armagh have a slightly tougher take on their hands but it’s one that they will have fill confidence in overcoming

Like Derry, Armagh have had a fantastic season with two massive back-to-back wins over fierce rivals Donegal and Tyrone. Although they failed in their attempt to win the Ulster Championship, this season will be seen as a step forward in terms of this team’s development, no matter what happens against Galway.

But like Rory Gallagher, Kieran McGeeeney doesn’t do sentiment of token gestures and he will have his sights firmly set on an All-Ireland final appearance and Galway stand in his way at the moment. I think this game will be fascinating because I really believe that both of these teams are tailor-made for the wide open spaces of Croke Park. If we look at Galway and in particular their forward line then it’s easy to see why Armagh might be concerned heading into this game.

The likes of a Shane Walsh or Damian Comer could bury you in the space of a few minutes so they will have to be extremely disciplined from start to finish. On the flip side Armagh’s kicking game could cause havoc in Croke park so it will be interesting to see how Padraic Joyce sets his team up. I pointed out after the Donegal game that the one area where I have concerns about Armagh is on their own kickout because when Donegal pressed them they caused them all sorts of problems.

Tactically you would think that Kieran McGeeney will firstly try and nullify Walsh and Comer. After that it may be a case of defending zones and trying to hurt Galway on the counter attack because they do commit a lot of bodies forward.

For me I’d play Rian O Neill inside for longer periods this time out because I’m not sure Galway have a player to handle him that close to goal. This is without doubt a winnable game for Armagh and a great opportunity to reach an All Ireland semi-final, We are all fully aware that in the semi-final, no matter who comes through on the other side, it will be a 5050 game so the possibilities are massive.

I’m going for an Ulster double this week so Armagh by two. Elsewhere I expect The Dubs and Kerry to set up the semi-final that we all want to see and I think they have too much quality for their respective opponents this weekend. Dublin by nine, Kerry by five!!