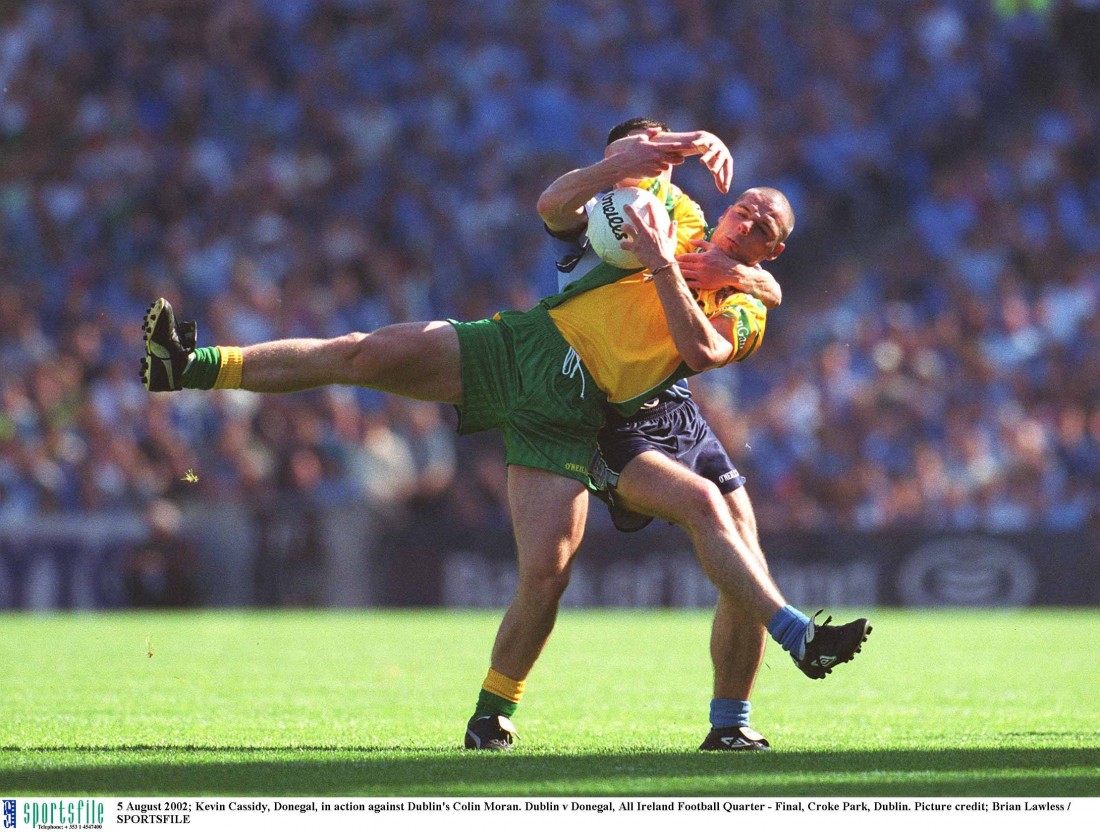 THIS week I am going to look at the top five Donegal games I played in. I hope it sparks some nice memories for Tir Chonaill fans.

My first experience of a sold-out Croke Park as we faced the Dubs in the All-Ireland quarter-final. When Croke Park was redeveloped and turned into the thing of beauty it is now, it was every player’s dream to run out there in front of a packed house.

It was my first year playing inter-county football and luckily enough we got drawn against Meath in the Qualifiers and the game was fixed for Croke Park. That game was intense and it was a great opportunity to get to play there and once you taste it, then it’s the only pitch you want to play on.

At that time, a lot was being made about the atmosphere that the Dubs created anytime they played there. Dublin would fill the stadium for big games so when we drew them in the quarter-final that year I was delighted.

Some players get nervous when the stakes are raised but I used to relish that sort of challenge. I just loved the pressure and I remember smiling to myself throughout that whole game. It was a cracking contest and one we should have won but that game will always stay with me for the atmosphere and experience, even if we lost the replay.

At the time we were building under Brian McIver and he used to always speak about dining at the top table. We put a massive effort into trying to win that league as Brian was of the opinion that before you won any championships you had to become competitive in the league.

That National League final against Mayo was also special for me personally as I had been wrongly sent off in the semi-final against Kildare and I got my red card overturned on the Thursday night before the final, so it was great to be able to play in that game.

The win itself meant so much to the Donegal fans who tracked everywhere to support us. It was as much for them as it was for the team.

Before this Qualifier game there was a lot of talk about the game being played in Castlebar.

Galway had won the All-Ireland in 2001 so they were a very good side at the time so naturally enough the decision to play down there was seen as an unfair advantage for them. The players didn’t care too much about it, all we wanted to do was to go out and play.

I remember pulling into the ground and the place being absolutely covered in green and gold. Donegal supporters travelled in their thousands and they must have outnumbered Galway supporters three or four to one.

It was a hot, sticky day and the atmosphere was amazing. We turned Galway over that day to set up an All-Ireland semi final with old rivals Armagh, and what a day and occasion it was.

For years we had spoken about winning Ulster and haven played in a number of finals, we just couldn’t get the job finished.

As a group that was our sole aim at that time, all we wanted was to win that elusive Ulster title. Under Jim we trained like we never trained before and by the time we reached that final in our minds we were never going to be beaten.

It probably wasn’t as an exciting final as a lot would have hoped for, but to us it was still very special as we had bridged that gap and won our first provincial title as a group.

At the final whistle I wouldn’t say there was joy, I’d say it was more relief that we had finally taken that massive step forward. Finals are there to be won and although we didn’t set the world alight that day, we got over the line and that was the important thing.

After we won Ulster the big question was could we push things on? Kildare were moving well under Kieran McGeeney and they were viewed as one of the top three or four teams in the country at that time.

McGeeney had them extremely well drilled and they were in tremendous physical shape so it was going to be a tough game in the All-Ireland quarter-final.

The game was on a Saturday evening and it was a dull, heavy night. Looking back now, it was probably the most absorbing and physically draining game of football I have ever played in. Both teams went at it hammer and tongs and for two supposedly defensive teams it tuned out into a bit of a shoot-out.

As the game progressed, the atmosphere became more intense. We looked to be dead and buried a few times but we kept clawing our way back into the contest. Deep into extra-time it looked again that we were going to come up short but we again rallied and came back at Kildare. We won the game in the end and after that game I think every last player just lay on the ground for a minute or two to try and get their breath back.

That game, for me, was that team standing up and saying that they were good enough to be at that top table that Brian McIver kept speaking about.

We could have folded a few times during that game but the desire and hunger was there to keep fighting and I think Donegal issued a statement that night.

There you have it, looking back those are my favourite games that I played in. Some are for simply winning and others are for the atmosphere and memories they created. I hope you enjoyed the walk down memory lane.