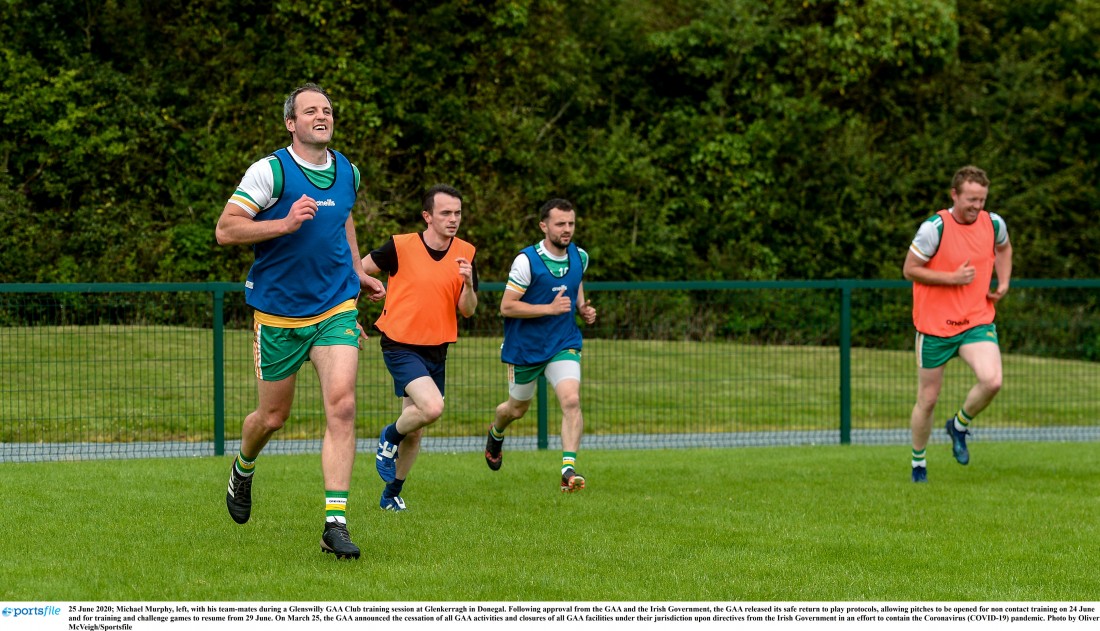 THE excitement is building all over the country as teams are back into the full swing of things on the pitches.

For senior teams, it’s great to get back in full training with the whole squad. Even more importantly, it’s great to see the underage teams back training.

When I drive down for a swim with the kids most evenings, I pass our pitch and it’s a hive of activity. I must admit that I have missed that.

Match fixtures will be the next thing to happen but for now I think we are just all delighted to be back to collective training.

As I expected, it’s proving difficult to get back into the swing of things. During lockdown I, like most others, would have done a fair bit of training on my own but it’s just not the same as training with a team.

The first few sessions have been extremely tough as when you start the twisting and turning that’s what really tests the legs, so there will be more hard work needed in order to get up to match speed.

I spoke last week about us still being in the dark over our fixtures and championship format but thankfully now it’s a lot clearer.

This year is obviously going to be different on all fronts and the fixture-makers were always going to have a tough job on their hands, but I must give the Donegal County Board great credit with what they have proposed.

We will run with a totally new format here this year and I must admit that it looks exciting.

We have the 16 senior teams spilt into two groups, Group A and Group B. Teams from Group A will be drawn randomly to play teams from Group B with each team having two home games and two away. In order to qualify for the quarter-finals, you must finish in the top eight.

This system allows for plenty of games and your fate is in your own hands so no one can have any complaints. We will also play a regional league that will start three weeks before the championship allowing teams to get a few games in first.

It should appeal to all clubs and it should make for an exciting few weeks for the club scene here in Donegal.

The one major concern I had last week, and it is proving to become an issue this week with the likes of the Offaly chairman Micheal Duignan hitting out strongly about it, is the issue around county training.

Let me begin by saying that we all want to see the county do well but that must not come at the cost of the clubs. Croke Park clearly stated that this period was for club training and club championships but when the President came out and said that there would be no punishment for any county team who trained before that then what else did he expect to happen?

For me there are too many blurred lines. It’s very simple, the county teams are either allowed to train before September 14 or they are not. It’s one or the other and this must be cleared up as soon as possible.

The GAA have to be crystal clear in what is allowed and what is not as if more and more counties come out and complain about it happening then it could turn into a bit of a joke.

These are the kind of blurred lines that will derail a season and undo all the good work of both club and county teams because if it becomes a power struggle then there will be no winner.

Whatever happens then it must be the same for all teams. There is no point in Donegal towing the line and leaving their players with the clubs if other counties are going to be training and gaining an unfair advantage, so that has to be cleared up once and for all.

The only people who are going to be left in no man’s land here are the players and that’s just not fair. It’s very easy for a county manager to turn around and demand his players be at county training but those same players must go back and face their clubmates then.

Hopefully all of those sideshows will be dealt with and we can all look forward to an action packed Summer/Winter of club and county football as it has makings of something special. Let’s all work fairly together to make the best of what we have.