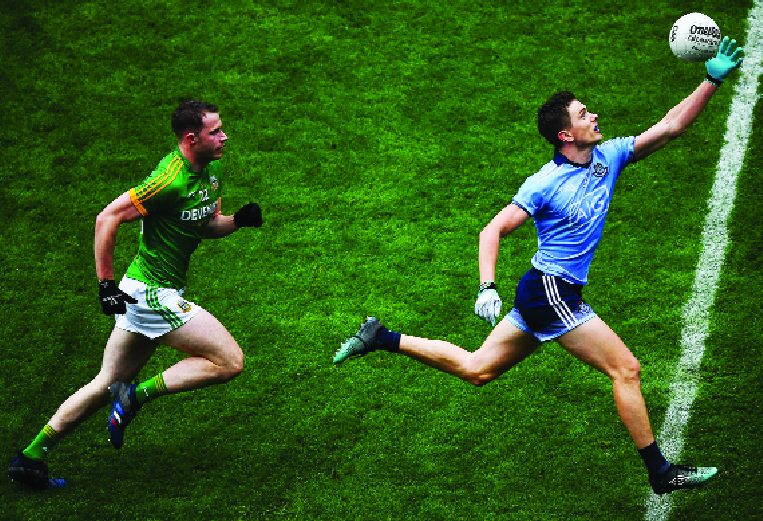 SITTING in St Julian’s Bay, Malta sipping a cappuccino minding my own business and I decide to take a flick through Twitter. Dublin are taking a serious pasting with all sorts of accusations being thrown in their direction.

Basically the argument is that Dublin are enjoying this prolonged period of success as a result of the amount of money Croke Park are pumping into the capital.

Normally things on Twitter or anywhere like that wouldn’t bother me, but for some reason it started to annoy me even though I have no connection to Dublin whatsoever.

We have a tendency on this wonderful island of ours of wanting to destroy any one or anything that is working well or doing well. For some reason we can’t just applaud and respect hard work and success.

Dublin have been the dominant team here for quite some time and instead of trying to learn off them and praise them for raising standards, we try to pick holes in them and say they have an unfair advantage.

When Kerry dominated the football or when Kilkenny recently dominated the hurling scene did we call on Croke Park to split those counties in two or demand that their funding be slashed?

There is no denying that they are heavily funded but to suggest that this is helping the senior team is ludicrous. I’m sure if the county board gave a breakdown of where the money is spent then the picture would become a lot clearer.

Unlike say a Donegal or a Cavan, Dublin are competing with a lot of other sports to keep youngsters involved in Gaelic games. Most of that money is spent on developing weaker clubs in the fourth, fifth, sixth divisions and getting those children to play our sport. Almost none of those will go on to play for Dublin but they will boost participation levels and keep our sport as the number one in the country.

When you look at that current team, Cluxton, McMahon, McCauley, Brogan, Kilkenny, McCarthy etc they have been there since the beginning of this success and they have been the backbone of what they have built. None of those players are as a direct result of Croke Park funding.

People will then argue that it’s Dublin’s conveyor belt of talent that sets them apart. The next group to come trough are the likes of Mannion, Scully, Howard etc, these guys like the guys before were produced by volunteers in their clubs just like the rest of us and money again played no part.

You can argue all you want that coaching and games promotion officers are producing all of these players to go on and play for Dublin but the fact of the matter is that success breeds success.

Young children are growing up watching this amazing team play great attractive football and they want to be them. Children are running around in their back yards pretending to be James McCarthy or Ciaran Kilkenny – that’s how players are truly made.

Coaches may have access to kids tow or three hours a week maximum, it’s what those young kids do in their spare times that sets them apart. Growing up I used to spend hours kicking the back against a wall and trying to catch it at its highest point because Jack O’Se. Anthony Tohill and, later, Darragh O’Se used to do it. I saw those great players and I wanted to be like them now money can’t buy that I’m afraid.

This Dublin team is from a golden generation who are simply maximizing their success before their time comes to an end. The group that comes after them will be nowhere near the levels these boys operated at no matter how many coaches are employed in Dublin.

This success is down to nothing else but hard work honesty and level heads. How many times have we watched teams win an All-Ireland and then their players’ heads gets stuck up their own arses and they can no longer sacrifice what they need in order to succeed? This current Dublin team simply does not allow that to occur and that’s why they are so good.

As I am sitting here my son Fionn makes his way down to us wearing what? You guessed it, his Dublin jersey that he insists on wearing as, like I said, success breeds success and everyone wants to be a Dublin player at the minute. Hopefully this time next year he will be back to the green and gold of Donegal because unlike a lot of others we are just putting the head down and trying to bridge that gap.

For the time being all that’s left to do is to sign off and leave Twitter alone and go and enjoy my sister’s wedding as she marries Noel Kelly, a cousin of Peter the great. A Kelly/Canavan/ Cassidy mix, now that could be dangerous!