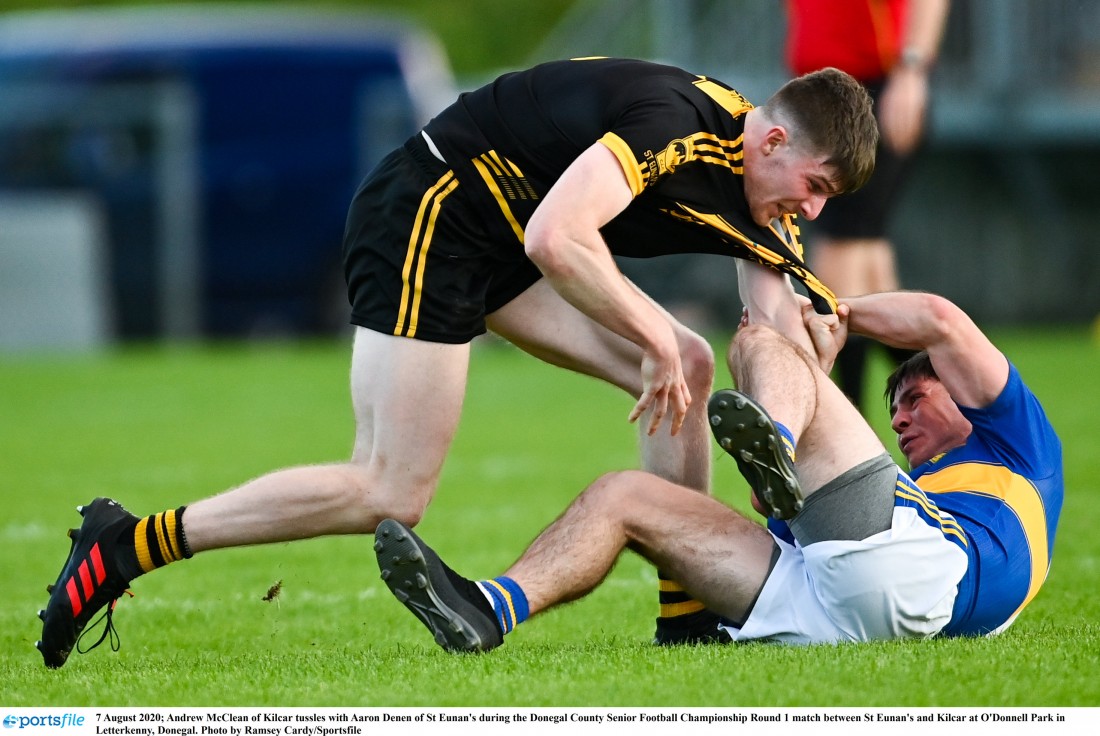 TWO down, two to go. We have reached the halfway point in the Donegal Senior Football Championship league stage and I suppose all the results have gone as expected so far.
A few teams are flying high at the moment but all in all the quarter-finals should be made up of familiar enough names.
The big clash last weekend was between Kilcar and St Eunan’s.
When anyone speaks about the possible winners of this year’s Senior Championship, both of these teams will feature strongly so it’s no surprise that there was major interest in last week’s game.
The game ended in a draw and I suppose if you look at it as a whole it was a fair enough result. Both teams could have won it but both could also have thrown it away.
Kilcar looked extremely impressive in the first half and caused St Eunan’s massive problems with their running power. Once they broke the first tackle they could then get at the St Eunan’s rearguard and they could have scored one or two more goals.
At the break it was difficult to see any way back for St Eunan’s, who missed a few good opportunities early on. Great credit must go to this young St Eunan’s side as they clawed their way back into the game from seven points down.
Both managers would probably be happy enough with the draw at the end of the game as it means they do not lose too much ground on the top two or three teams.
The biggest disappointment for St Eunan’s will be that they lost Niall O’Donnell to a silly red card and depending on what he is cited for, he could miss a few games.
The game was in the melting pot and Kilcar had a kick-out and Niall tried to disrupt the ’keeper by kicking the ball away. The only problem was that he ran from about 30 metres away and as he went to kick the ball, the ’keeper’s hands and feet were there instead. I am sure Niall will regret this and he will be hopeful that he just gets one-match suspension.
Elsewhere, the likes of Naomh Conaill and my own club Gaoth Dobhair had comprehensive wins and both of these teams are now within touching distance of the quarter-finals.
Other teams who have done well to date are Glenfin, St Micheal’s and MacCumhaill’s. Depending on the draw for the last group games, one or two of these teams will possibly squeeze the so-called top four out of a home game for the quarter-finals. For any team who misses out this will be a massive blow. To have a home quarter-final game is massive so all teams will do whatever they can to ensure that they get one of those top four places.
We are on the road again this weekend as we travel to St Naul’s. Like Four Masters a few weeks back, it has been a number of years since we have played St Naul’s at senior level.
During my earlier days they were always in the mix at senior level and had some good teams but over the last number of years they have gone down a division.
They have had a lot of success recently at intermediate level so there is no doubt that the confidence levels will be high. They have a number of players with county experience so I’m sure they will be handful, especially at home.
I have to admit that this new format this year is refreshing as you are meeting new teams and you do not know the opposition months in advance, so there is an air of excitement around each draw.
This week’s games will prove massively important to the final shake up of the group so all games will be keenly contested as teams make their move for the quarter-final stages.
You would expect the big teams to make the last eight but it’s the home advantage at the quarter-final stage that could catch you out. Take for example Gaoth Dobhair. If we were to finish outside the top four then you could face a trip to Kilcar or the Glenties in the quarter-finals, and that’s not exactly where you want to be this early in the competition.