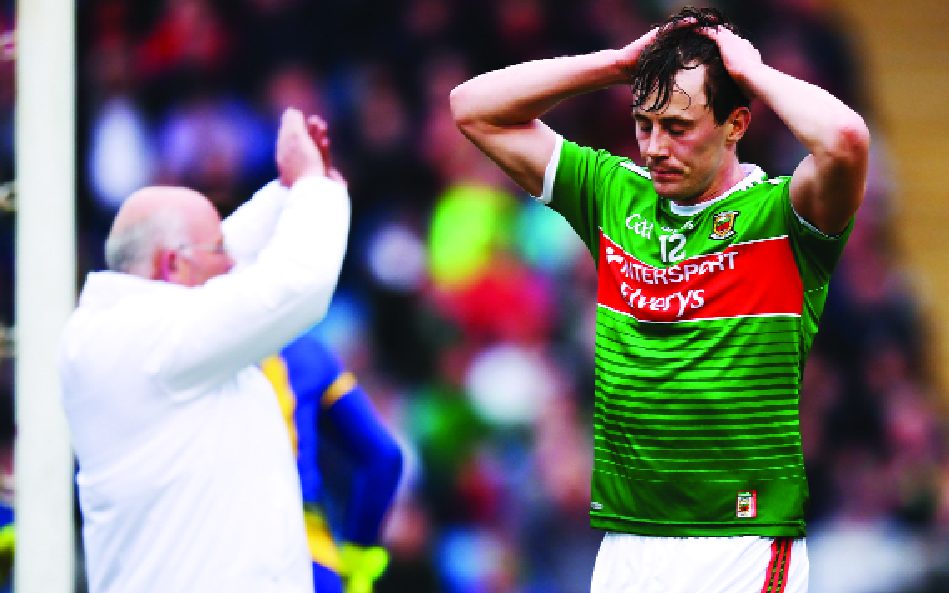 THE games are coming thick and fast and another big gun stumbled at the weekend.

Before I get into the games, I’d like to touch on where we are at and explain how over the last two weekends, two of the top six in the country have been beaten.

Last year we introduced the ‘Super 8s’ and that now means that all the teams that reach the quarter-final stage have to play three games.

These games, you could say, are against the cream of the crop because any team that has made it to this point have either maneuvered their way through the Qualifiers with their games getting slightly tougher week-on-week or else they are successful in their province.

If you are the manager of a top six team you have a decision to make. Do you go hell for leather and have your lads in top form from May onwards and hope to win your province and then hope that the lads can stay at their peak until September or do you bite the bullet and go for the second approach?

The second approach is slowly lifting intensity levels from May to July and taking the chance that your team is good enough to beat the smaller teams in the Qualifiers and once August swings around you will be at your peak.

For those of you who may be a little out of touch with the modern game, I’ll explain how that decision is made.

The strength and conditioning coach will sit down with the manager and explain that if your players aim to be at their best for their provincial championships then it is simply not possible to maintain those standards until September.

Now your manager has a decision to make. Does he go all out and win another provincial title or does he focus his eye on being ready for the ‘Super 8s’?

The bigger teams need to be ready for the ‘Super 8s’ and a provincial title just won’t cut it in those counties, so that’s why we are seeing the likes of Monaghan and Mayo fall out of the race for provincial honors.

However, you would be silly to rule these teams out because of their recent performances.

Credit where credit is due, both Cavan and Roscommon fully deserved their wins but you have to understand that these teams are operating at near full throttle at this stage while the bigger teams are not.

Cavan and Roscommon need a provincial title whereas Monaghan and Mayo have seen enough of those in recent times so for them it’s all about the bigger picture.

I think the less said about last weekend’s game between Fermanagh and Donegal the better.

Fermanagh were always going to park the bus but it is horrible to watch and it does absolutely nothing for the game. Donegal did what they had to do and as I explained last week, a lot of the players on the Donegal team were on the team who invented this template back in 2011 so they know how to be patient and how to grind it down so for me there was only ever going to be one winner. That result now sets up an almighty clash with Tyrone that I’m sure the whole country will be eager to see.

This weekend after their morale-boosting opening day wins, Cavan and Armagh lock horns.

This could turn out to be a great battle as I believe that both teams are operating around the same level. Both teams are playing a faster and more direct style of football this season so it should make for a fascinating contest.

Confidence will be high in both camps so it really could go either way. I was up in Armagh in February when my old friend John Morrison passed away and I met an old man called Joe on the street and as we chatted he said to me that Armagh were going to have a big year this year so I’m going to stick with Joe’s judgement and say Armagh by three!