THINGS hot up this weekend as the National Football League heads into the home straight.Teams will have used the week’s break to squeeze in some extra training and preparation as minds now slowly turn towards summertime football.

As we head into the last few remaining fixtures, teams at both ends of the table will be eager to put their best foot forward and start to get into their rhythm. The last few games will come thick and fast so it’s important that teams start to find form because before they know what the championship will be on their doorstep.

And when we look across the fixtures in all divisions there are few big games this weekend, but given where both teams are at the minute the main focus this weekend will be on the clash between Tyrone and Dublin.

We are all fully aware of the mounting pressure on this young Dublin team at the minute and they know that anything other than a win this weekend will more than likely mean that they play in Division Two next season.

I do expect to see a little more from them this weekend and they will be hoping that they have one or two of their injured players available to them because they really need to start to find their form and get the season back on track. Week after week more pressure is applied and a win at this stage could ease a lot of that pressure and give them the breathing room that they need. We all know how hard it is to get anything when you play in Omagh so they will be under no illusions of the task that lies ahead.

Tyrone, on the other hand, would be extremely disappointed that they failed to get anything out of the last clash against Donegal so they will see this as a perfect opportunity to cement their place in the division for next year. Tyrone played extremely well in patches against Donegal and had enough chances at the end to get something from the game, so there are plenty of positives to take into this weekend’s game.

Monaghan make the journey to Ballybofey this weekend and as with Tyrone and Omagh, it’s very difficult to beat this Donegal team in Ballybofey so that has to be a massive plus for Declan Bonner and his team.

Donegal had a bit of a mixed bag against Tyrone with some really poor patches but the most important thing was that they dug out a result and got the victory that they needed. I expect Michael Murphy to sit out this game as wel because after claiming the points against Tyrone, the pressure eases a little. That will give Michael some extra time to recover properly in time for the championship.

With Michael being absent Donegal’s younger players are being asked to step up to the plate and I think that they are doing a tremendous job to date. If we can find one or two young players who are capable of sharing that burden then when Michael returns Donegal will be a dangerous outfit.

Monaghan come to Donegal on the back of a poor performance against Kerry last time out so Ballybofey isn’t the ideal location for Banty and his men to try and get things back on track. They were opened up on a number of occasions against Kerry and with Rory Beggan going AWOL for two of the Kerry’s goals this is surely an area where Donegal will focus on this weekend.

Elsewhere this weekend high flyers Derry will face their stiffest first test to date this season when they travel to play Roscommon in ‘The Hyde’. Rory Gallagher’s men have been flying high so far this season and people are starting to sit back and take notice, so this weekend will be massive in terms of turning in an impressive display. For Derry to be taken seriously this year they must back up their performances week after week so there is no doubt that Rory will be driving that message home this week as he prepares his troops for battle.

Finally to finish up I’d like to extend a warm congratulations to Mickey Moran as he ends his tenure with the Kilcoo footballers. When Mickey sits down and looks back on what he achieved I’m sure he will be delighted with his efforts.

His record is unbelievable and personally I’m delighted for the man as he is an absolute gentleman and I owe him a lot considering he gave me my debut at intercounty level. I wish him all the very best and perhaps we might be able to persuade him to park his mobile home on the beach in Gaoth Dobhair and get him to take the reins of our senior team! 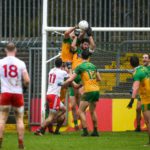 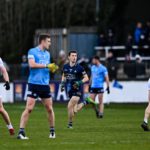