I WAS at Drumaness on Friday night for a tribute to Peter Withnell. 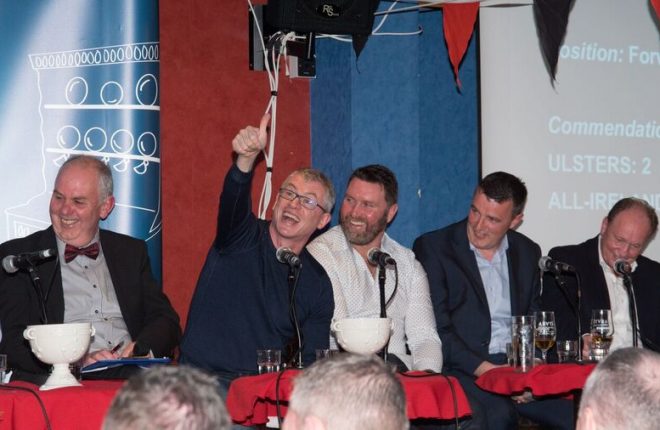 I WAS at Drumaness on Friday night for a tribute to Peter Withnell. The club wanted to celebrate the forgotten man of Down football, 25 years after Down’s great 1991 campaign.

The ‘91 team was there, as was their manager Pete McGrath. Withnell was a human wrecking ball. He played full-forward between Wee James and Mickey Linden, his pace and power leaving the room for them to run riot.

After the normally serious McGrath made a very funny remark on stage on Friday, Wee James said “I see you got a humour transplant in Fermanagh.” In fairness you’d need one to manage those Fermanagh boys.

Wee James was one of the most amazing sights there has ever been on a football field. As a schoolboy at St Colman’s College, McCartan was unique. The excitement he generated was like nothing I have seen before or since. He was, as I said on Friday night, the first Gaelic footballer to be able to catch a ball between his feet at full speed. I also played with Mickey Linden for Ulster. I was a flying machine but Linden made me feel like the white man in the 100m final. Then there was Big Peter.

After the first, Colm O’Rourke says “In fairness he wouldn’t be as well known as Linden and McCartan.” Tom Spillane, the multi decorated Kerry full-back that day, didn’t know who Withnell was at all. “In fairness” said Big Pete on Friday night, “I didn’t know him either.”

He wasn’t lying. Withnell is an interesting case. A Protestant, he was a brilliant soccer player and a fearsome striker in both the Irish League and League of Ireland, top scoring with Cliftonville, Ballymena and Dundalk. This was a constant problem because McGrath disliked soccer and had banned the boys from playing.

So Withnell lived a double life. On Friday, he and Ross Carr told a story that sums this up. Just before a league game between us at Celtic Park one day, McGrath called Peter outside the dressing room.

When he was introduced onto the stage of the small clubhouse on Friday, it felt like a minor earthquake. Those Down boys are tremendous fun. They don’t take themselves at all seriously and they have total respect for the game. Presiding benignly over it all was Wee Pete, who was still there sipping spring water at one in the morning, even though he was heading off at seven the next morning with the Fermanagh boys, to play Mayo in Castlebar.

I cannot tell you how many times I laughed out loud. Someone reminisced that Withnell used to drive McGrath mad at training by heading the ball to the net during training games, then sinking onto one knee and doing the trademark soccer fist pump celebration. Withnell showed me it, teeth gritted and glaring at the fans. I went into fits.

Ross told another one about a period when Withnell had been put off the panel (again) for playing soccer. Presumably Pete must have had DNA evidence of that one. Anyway, after Pete had dropped him, it soon became apparent they needed a full-forward.

So, just a month before the ‘93 championship first round against us, McGrath called him, and Withnell immediately agreed to return. So the next night, he made his way to St Colman’s where the team had gathered for the bleep test. Carr says Withnell arrived when the others were already there, wearing a Cliftonville top. The test began and as the boys dropped out one by one, the always super-fit Withnell powered on and on.

For the last five minutes he was on his own, getting faster and faster as the bleeps sped up. In the end, he stopped, strolled towards the exit door and shouted over his shoulder “Pete, don’t be wasting my time. Give me a shout when you’ve got these boys fit.”

The most electrifying display of Gaelic football I ever saw was their third quarter performance in that ‘91 final against Meath. Withnell ran through Liam Harnan early on, the game’s most notorious hardman, poleaxing him. It set the tone. On Friday, Pete McGrath brought proceedings to a close by remembering his famous after match speech in ‘91. “They said this Meath team could not be beaten. Well here is the team that beat the team that couldn’t be beaten.” As the clubhouse erupted, Withnell turned to me and whispered “ Thank God that’s over Joe. I’ve never been so nervous in my life.”
What a man! And what a team!
comment@gaeliclife.com