THE first announcement on Saturday at Owenbeg was that Marty Duffy was the referee. 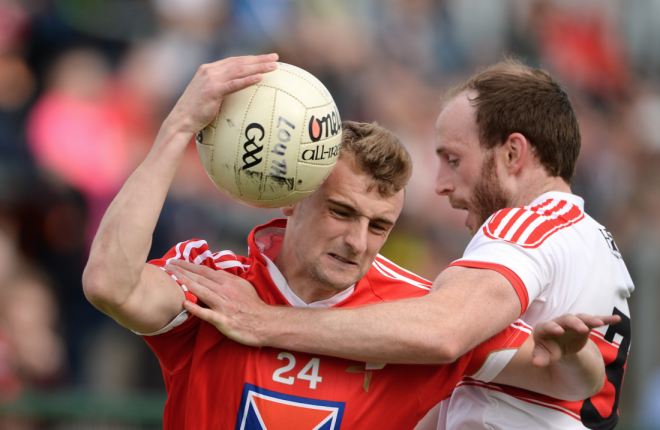 THE first announcement on Saturday at Owenbeg was that Marty Duffy was the referee. Croke Park should make a special jersey for Marty that says “If you think I’m bad, you should see my brother.”

A Louth man in front of us was very disgruntled at some of his decisions. “What would you expect?” he said, “sure Sligo’s only 10 mile down the road from here.” Which merely proves that Louth men don’t get out enough.

For the throw in, Derry lined out with the three big men at full-forward. Mark Lynch, James Kielt, Emmett McGuckin. Christ, we thought, this could be really exciting. The ball was thrown in. We won it and drove it long to the square. Lynch fielded it cleanly. We rose to our feet as he went round his man and drove it narrowly wide. Still, a great start.

The last time Derry played with three men in the forward line, never mind full-forward line, was during John Brennan’s tenure, in the days when we played with adventure. Bloody hell, we thought, we are going to push up man to man v Louth, kick early ball to the square and beat this shitty Division Four team by 20 points. Hoorayyyyyy!

Well, the excitement didn’t last long. By the time the Division Four team’s goalie had set the ball down to kick it out, Derry had one inside forward and everyone else had retreated into the abysmal, self defeating, illogical defeat for the human spirit that only the Derry management could describe as a game plan.

Jesus on a bicycle. So Louth kicked out the ball to free defenders all day long, revelling in the fact that instead of destroying them we were sparing them. More than that, we were building their confidence, six days after a morale shattering defeat to Meath.

After a few minutes, Emmett McGuckin was alone in the forward line and everyone else was inside our 45. Time for a nap. They might as well have brought a sofa out onto the field for Emmett. A key part of this footballing nightmare is solo running. In the absence of a logical team structure, the void is filled with aimless solo running. One would not be surprised to learn that the Guinness Book of records team was at Owenbeg to see if Derry were soloing their way into the record books.

Brendan Rogers, Niall Holly, Neil Forrester, Conor McAtamney, Mark Lynch, Liam McGoldrick, Daniel Heavron, Eoghan Brown, Gareth McKinless, Karl McKaigue and Ciaran Mullan solo ran as if their lives depended on it. As they did that, Emmett McGuckin might as well have got out the banjo and started plucking on it.

James Kielt, a prisoner in a ridiculous game plan, tried to play football, but the odds were stacked against him. In spite of that, he was the best player on the field. Looking up, kicking long, scoring from distance, playing with inventiveness and trying vainly to show example. It is a pity he has been forced to labour in such soul-destroying systems during his peak years.

He is an incredible talent, with every conceivable skill. He is also a superb athlete and a huge man. But he was mostly wasted, roving deep inside the Derry defence. As was Mark Lynch.

The fact that we solo run and then handpass to a man in a position no better than the man who delivered the handpass meant, as always, that the defence was comfortably in position by the time we came near their half and so we were stuck on their perimeter, handpassing the ball about.

I will say this in fairness. We were prepared to kick long if it is backwards or sideways. At one point in the first half, after he had tired himself out with a solo run in various directions, Conor McAtamney found himself on the sideline at the halfway line, under the stand. Kick the f***ing thing” people were screaming. “ For Jesus sake, kick it.” He looked across field, saw Niall Holly on the far sideline about ten metres back, and raked a perfect long kick to him. Niall caught it, all alone, and… you guessed it…. went on a solo run as the Guinness Book of records boys looked at each other excitedly and said “These boys are going to obliterate this record by half time.”

It makes no sense. We are playing without a half-forward presence, so there is no option of clearing a ball long to a half-forward, who can then hit the inside forwards before the blanket defence can get into position. One part time sweeper is enough. At all times, a team should have a minimum of four forwards ready to rock, two in the half-forward area, two in the full-forward line.

Because we don’t do this, and everyone is back in the defensive area, we are forced to solo run and hand pass. This in turn creates a culture of holding possession. Which in turn creates a dread of giving the ball away. So the lads are afraid to kick the ball forward since that might be a little risky. Better to knock it back to the goalie or sideways to the centre half-back.

The effect of this is that the Derry boys play with fear in possession. Not in possession, they tackled Louth very well, but because of our set up, we spent the game tackling a shit team, instead of building team morale, playing with courage and adventure, and putting on a much needed show for their families and friends. We didn’t score a single goal from play. How could we with that set up? And we have plenty of good players and some excellent ones. An aggressive athletic midfield. Good, hard tackling, passionate defenders. Three really top quality forwards including a potential All-star in Kielt. But they are all being wasted.

We play shit, depressing football. Which is why on a lovely day for football, in a beautiful, easy to get to venue in the centre of the county, we had 1,600 in attendance, including Louth folk. What is the point of this?

By halftime, we were two points behind and wondering how much worse it could get. We won in the end. Louth got tired. Kielt scored a penalty. It was a victory that felt like a defeat.
comment@gaeliclife.com