THE stand out moment in the McKenna Cup so far was Bam Neeson's second goal against Queen’s. I was dragged up to the match by my oldest son Rory, who would go to Leitrim to see an u-14 match if I suggested it. “Great da, can we stop for a kick about in Garvaghy on the way?” “ Who do you think will play at number 14 for Manorhamilton?” “Can we buy a Leitrim half zip afterwards?” 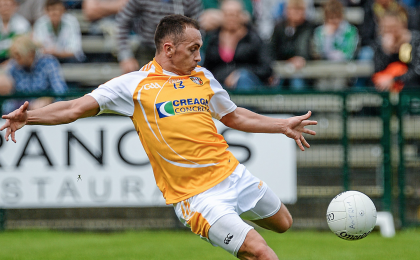 THE stand out moment in the McKenna Cup so far was Bam Neeson’s second goal against Queen’s. I was dragged up to the match by my oldest son Rory, who would go to Leitrim to see an u-14 match if I suggested it. “Great da, can we stop for a kick about in Garvaghy on the way?” “ Who do you think will play at number 14 for Manorhamilton?” “Can we buy a Leitrim half zip afterwards?”

The stand at the Dub was surprisingly full. Rory insisted I wear an Antrim bobble hat. “Like the hat Joe, you an Antrim man now?” We were awakened by the half time whistle. Which was somewhat inconsiderate of the referee, who could have blown a little more quietly or even just beckoned the teams off.

The second half took up where the first had left off. You know the drill: Blanket defences, group tackling, turnovers, soloing, hand-passing. Then, a funny thing happened. Bam Neeson had been dropped after the Derry game when he had got fanked up in the web of Derry’s defenders and sweepers and hadn’t scored 1-4 from play.

With 20 minutes to go he was brought on. Bam is a real footballer. He just doesn’t have the pace and athleticism of Conor McManus or the heft and power of Michael Murphy. Which means that nine times out of ten in the modern game he won’t count. But boy can he play. Luckily for the crowd at the Dub, playing against Queen’s gave him that little bit of space he needed.

His first touch: Kevin Niblock was doing his bull in a china shop routine, head down, ricocheting about and bashing into Queen’s men like a 14-stone pin ball. He reached the Queen’s 21 before finally going down under the weight of a five-man tackle, then shovelled a fist pass out towards Bam who was standing back a yard or two like Jonny Wilkinson waiting for the drop goal.

It scarcely touched his hands and it was gone, swerving perfectly into the top corner as the posse dived to block. The Queen’s keeper never moved. Bam merely looked towards the management team with a sad, accusing expression that seemed to say “What were you thinking of men? What were you thinking of?” We were wide awake now. And so were Antrim.

Now only two points behind, from the kick-out Michael McCann, one of the most beautiful Gaelic footballers I have had the pleasure of watching, took the high catch and headed for goal, soloing with the right, the left, dummying and feigning. All the while he had his head up, scanning his options. Like the baddies in a Bruce Lee movie, the Queen’s defenders were mere pawns in his game.

When he reached the 21 he feigned to hand-pass, toe-tapped with the left, then drove a perfect shot to the top right-hand corner off his right foot. What a player! If he was a Tyrone man he’d be a multi decorated All-Star and All-Ireland winner. His sister is married to Enda McGinley. The thought must have crossed his mind manys the time.

In fact, he would have been the missing ingredient in that Tyrone team, a bona fide, 100% footballing midfielder. Back in the real world, he has to be content with one championship match a year and usually one qualifier.

The best was yet to come. Antrim were now firing in long balls. Queen’s were chasing the game. Bam, who has brilliant positional sense, took his man to the edge of the D, then as the ball came in, turned him, nudging him away from the ball’s trajectory with his hips, before taking off towards goal. As the ball came into his hands, he dropped it. We didn’t have time to groan. As it hit the ground, he looked up and chipped the keeper with the most delightful lob. The crowd laughed in delight. “Wham, bam, thank you Bam.” Bam turned again to the sideline and sadly nodded his head, in the manner of a great scientist whose advice has been rejected by ignoramuses.

Luckily, Jerome Quinn was there to video it so the goal quickly went viral. My old Derry team mate Ronan Rocks texted me a few days later

“Just saw Bam’s chip there. Last time I seen that was back in 2000 in the McKenna Cup v Monaghan. The keeper came out and you lobbed him. It was a clinker. As it was going over the line Adrian Lagan had the cheek to run in and kick it into the net.”

I had to sit down and think about it. At first, I thought Roxy must have gotten it wrong. The brain works in mysterious ways. Half an hour later, when I was doing something else entirely, it came flooding back.

“The wee bastard” I texted Roxy. “ I forgot all about that.”

Roxy: “ Hahahaha. The wee bollox ran to the crowd celebrating and all. You not remember the bollicking you gave him in the changing room afterwards? You said that as long as he lived, he would have to live with the fact he had spoiled one of your goals.”

Roxy: “In fact, we all ate the bollocks off him. The cheeky wee hoor.”

As is Roxy’s wont, he couldn’t resist adding. “ I’ll never forget that match, It was in Blaney. Very big crowd. Me and McBride lorded it at midfield. I did the high fetching and left the scraps to Johnny.”

As we came away from the Dub that night, in good spirits, I couldn’t help thinking how sad it is that players like Niblock, McCann, Neeson and so many others in Antrim colours are so badly treated by the championship system.

When they compete against teams of similar ability, they can show their skills and play great, competitive football. But when they play against the better teams it is an embarrassment. So, against a second string Tyrone last week, they failed to score from play for the full 70 minutes, registering six frees and losing by a cricket score.

On Sunday morning, when I was arriving at the Dub at noon to take our first u-16 session of the year, the Antrim boys were trudging off the pitch, muddied and weary looking after a hard session. They deserve a lot better. And they certainly deserve a lot better than the shoddy Division Four championship proposal that is before Congress next month.