I LISTENED to the Donegal Monaghan game in the car, flicking between Ocean FM and Northern Sound. 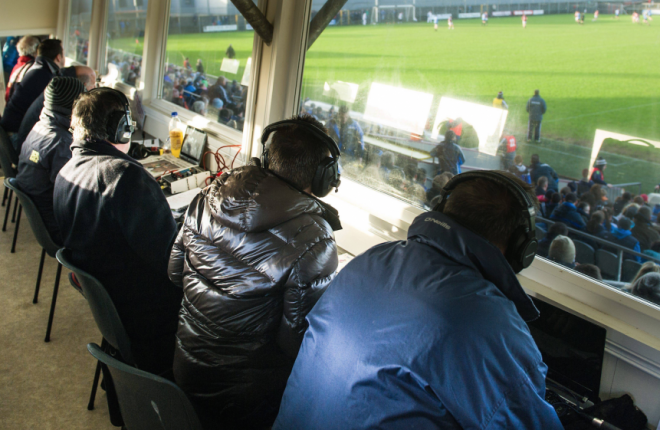 I LISTENED to the Donegal Monaghan game in the car, flicking between Ocean FM and Northern Sound. I cannot remember the last time I enjoyed a game of football so much.

The Monaghan men in one corner, with Nudie Hughes co-commentating. The Donegal men in the other, with Pauric McShea and contributions from wee Martin “Well you know like, I’m not just saying it, but I think the decision to bring on our Mark is a good one” McHugh. On Northern, Nudie, initially despondent as Donegal went five up, became extremely excited when the two Monaghan goals rocked Donegal.
“FORGET THE EUROS! FORGET THE LEINSTER CHAMPIONSHIP! FORGET THE IRAQ WAR! THIS IS A REAL WAR IN CAVAN TONIGHT.”

Listening to these legends of the game saying what they really meant on air was just brilliant. The passion, the bias, the honest reading of the game is something the big networks now avoid as though it were the ‘n’ word.

The disease of balance has almost completely conquered honest discourse on the national channels. “No I’m sorry Joe, you can’t say that about Kerry football. The entire population of Kerry isn’t in the studio to defend itself.” “Now Colm, I’m going to stop you there. Saying that Meath played well today sounds like bias and although we had hoped to have a balance monitor from the United Nations in studio, that hasn’t been possible. We can however talk about little kittens…”

Not only did the lads on Ocean and Northern call the game expertly, but they did so with real emotion. There wasn’t a single bland politically correct comment. No one was currying favour with an electorate. No one gave a damn about balance.

Imagine standing in a bar saying the sort of condescending, sugary stuff to your mates that is becoming the norm on the national airwaves? “Leitrim played very well and certainly didn’t come up to make up the numbers. Sligo played very well too and both teams did their best. It was just unfortunate that one team had to lose but I suppose it’s the taking part that is important.”

When Donegal won the game in a breath-taking finish, the commentary team’s agony at Ocean turned to whoops of delight. Wee Martin was defiant and ecstatic. Having watched his sons and nephew play a blinder, he took the mic, spoke at a hundred miles an hour out of sheer emotion, then ran off to hug the boys. Pauric said it was a bloody nose for those who had written off Donegal. At Northern, meanwhile, the atmosphere was funereal. The problem, as Nudie noted, was that “we only have one Conor McManus.” Mind you, one was nearly enough.

Watching the tape the following night, it was the pace of Donegal’s running out of defence and the clever angles the runners made off the ball that was decisive. Also, their greater defensive flexibility, which combined man-marking and zonal defending to excellent effect.

In truth, it was a one point hiding. Donegal utterly dominated the game but could have lost it because of two isolated incidents. The first Monaghan goal came when McManus was lining up to take a free and four of Donegal’s defenders took the opportunity to come into a huddle and have a word. As soon as they did, McManus, who is proficient in the art of a ten-metre kick pass to an unmarked man, kicked the free to an unmarked man who popped it in the net. It was the most amazing thing I have seen a Donegal team do since the pre Jimmy era, when making eejits of themselves was par for the course.

The second was a needless foul for the penalty. It was clearly not a black card, since the player was not deliberately pulled to the ground, but it was a stupid penalty to concede since the cover was in place. A penalty for McManus is like a free high catch for Kieran Donaghy.

Then there is the mystery that is Monaghan’s fighting spirit. Most other teams would have been dead and buried by the last ten, but the thought they were in peril never seems to enter their heads.
They just kept driving on and driving on, giving the boys in the Ocean studio no peace. Then, the final whistle, the cheers, the joy, and the boasting. “That’s six Ulster finals in a row, and no one can take that away from us.” “They said we were done and we’ve proved them wrong again. Bring on the Ulster final.”

It is now clear to me that the only way to watch football is on local radio.
Comment@gaeliclife.com