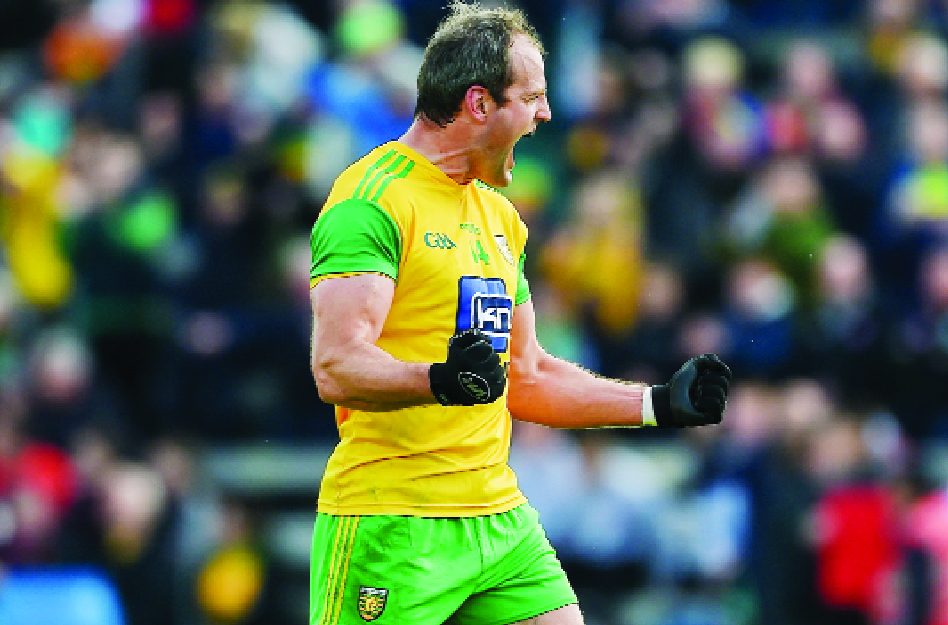 WE are having the best Ulster Championship in a long time. Some of the games have not been of the highest quality, but the one essential ingredient has been present for most of the games. They have been battles, where the boys have thrown themselves into it without fear.

The expression “wigs on the green” came from the ancient practice of the men of one parish facing off against the men of another. They would meet on a green area, usually neutral, take off their wigs and put them on the ground, then go at it.

After several years of dull, formulaic diluted down football, we are starting to rediscover the essence of Gaelic football. Cavan v Monaghan, Cavan v Armagh (twice), Armagh v Down (almost twice), and at the weekend Donegal v Tyrone.

From the throw-in on Saturday, Declan Bonner put his wig on the green. He decided to swamp the Tyrone scoring zone, thwarting Tyrone’s tactic of kicking long ball to their full-forward. Mickey Harte, bafflingly, continued to play as though Donegal had not done this at all. So Mickey looked on with the puzzled expression of a monkey doing a jigsaw.

In the circumstances, it was unsurprising that Tyrone reached half-time seven points behind, and it could have been worse, with the wonderfully entertaining Jamie Brennan hitting the woodwork in the 17th minute when he was put clean through.

Tyrone must have spent the half-time break praying because they came out in the second half and continued to play as they had in the first. Divine intervention has its limits. God must have had better things to do at half five on Saturday than give Michael Murphy a hamstring injury, or strike down Eoin ‘Ban’ Gallagher, or straighten Colm Cavanagh’s feet.

It isn’t always the case, but this game was won and lost by the tactics. Tyrone did not appear to have considered the possibility that Donegal would glue them up by swarming the scoring zone, even though this tactic is in Donegal’s DNA.

It was an easy instruction for Declan Bonner to give and it turned out to be an ambush in broad daylight. When Donegal dropped back to prevent Tyrone’s tactic of kicking long to the square, Tyrone didn’t adapt. Had it been the Dubs, for example, they would immediately have clocked the blanket defence and moved to plan B. That is, they would have worked the ball carefully and patiently around the blanket, worked breakthroughs in twos and threes, picked their shots carefully and tested Donegal’s patience by keeping the ball from them for long stretches.

When they lost the ball or were defending a counter attack, they would have tracked their men carefully, stayed goal side of them, then corralled them down the sidelines before going in to tackle them hard. As it was, Tyrone laboured forlornly to their doom.

It was all very depressing for Tyrone folk. There were two tactical issues: Firstly, with Donegal dropping back in such numbers, and Hugh McFadden stationing himself on the 14, the early long ball game that had worked to such great effect for Tyrone during the league was not a runner.

Secondly, in deciding not to push up on the Donegal zonal defenders, they left them free to roam forward unmarked, resulting in chaos in Tyrone’s defensive area. I highlighted in the studio before the game the gaps that have been apparent in the Tyrone defence since their move away from their 13-man zone, which allowed Derry and Antrim to score easy goals running through the middle of the scoring zone. This problem had not been remedied and Donegal took full advantage of it.

With Ryan McHugh and Eoin ‘Ban’ Gallagher running amok from wing-back, and with Tyrone defenders running towards their own goal with their backs to the play, casting desperate glances over their right and left shoulders, Donegal cut through them with ease.

Once Jamie Brennan (who is turning into a top class forward) was put through for his goal in the fourth minute, the game was over. At no point after that was there any sense that Tyrone could turn things around, even if Darren McCurry looked very good after being brought on when it was too late.

Long before half-time, Tyrone, with zero guidance from the sideline, had given up. The players need to be given the platform to play and this is the manager’s job. In the event, Tyrone didn’t change tack, so Donegal knew they were on the pig’s back and that all they needed was not to do anything daft.

Tyrone proceeded to collapse, kicking ball over the sideline, hand-passing it to Donegal men, taking pot shots and generally looking awful. The comical highlight was when Niall Morgan soloed out to the halfway line, hand-passed it straight to a Donegal man and almost suffered the ignominy of a goal being kicked back over his head to the empty net. Why Jamie Brennan didn’t take it on I will never know. Instead, he hesitated, was fouled, and Michael Murphy nailed the easy free. Darren McCurry would have popped it in the net without blinking.

Jamie Brennan was electric in the first half but tired near the end and was taken off, not before he had kicked 1-3. Eoin ‘Ban’ Gallagher looked like the Road Runner from the Wily Coyote cartoons, and looks like he will take over the mantle from Jack McCaffrey as the man most likely to leave burn marks on Croke Park. Every time he put on the burners, the crowd gasped and giggled. He is ridiculously fast, and has the skills to go with it.

By the 28th minute of the first half, Donegal had 100 percent success rate from their own kick-outs. Tyrone had 25 percent. Tyrone had resorted to pot-shots from far out and humorous, panicky efforts up into the air. Donegal meanwhile were able to take good shots from inside the scoring area. By the end of the game, Donegal had 98 percent kick-out accuracy. Tyrone 56 percent. This statistic exemplified the lack of confidence in the Tyrone squad and the way they so dramatically went to pieces.

As for Tiernan McCann, It is difficult to say what is inside a young man when he behaves so viciously on the field. Normally, it’s the sort of thing we see in the courts now and again, when there is CCTV footage of a gratuitous street attack. Maybe he needs anger management. It made for a very disappointing sight for GAA lovers. Tyrone’s disappointment pales into insignificance beside it.