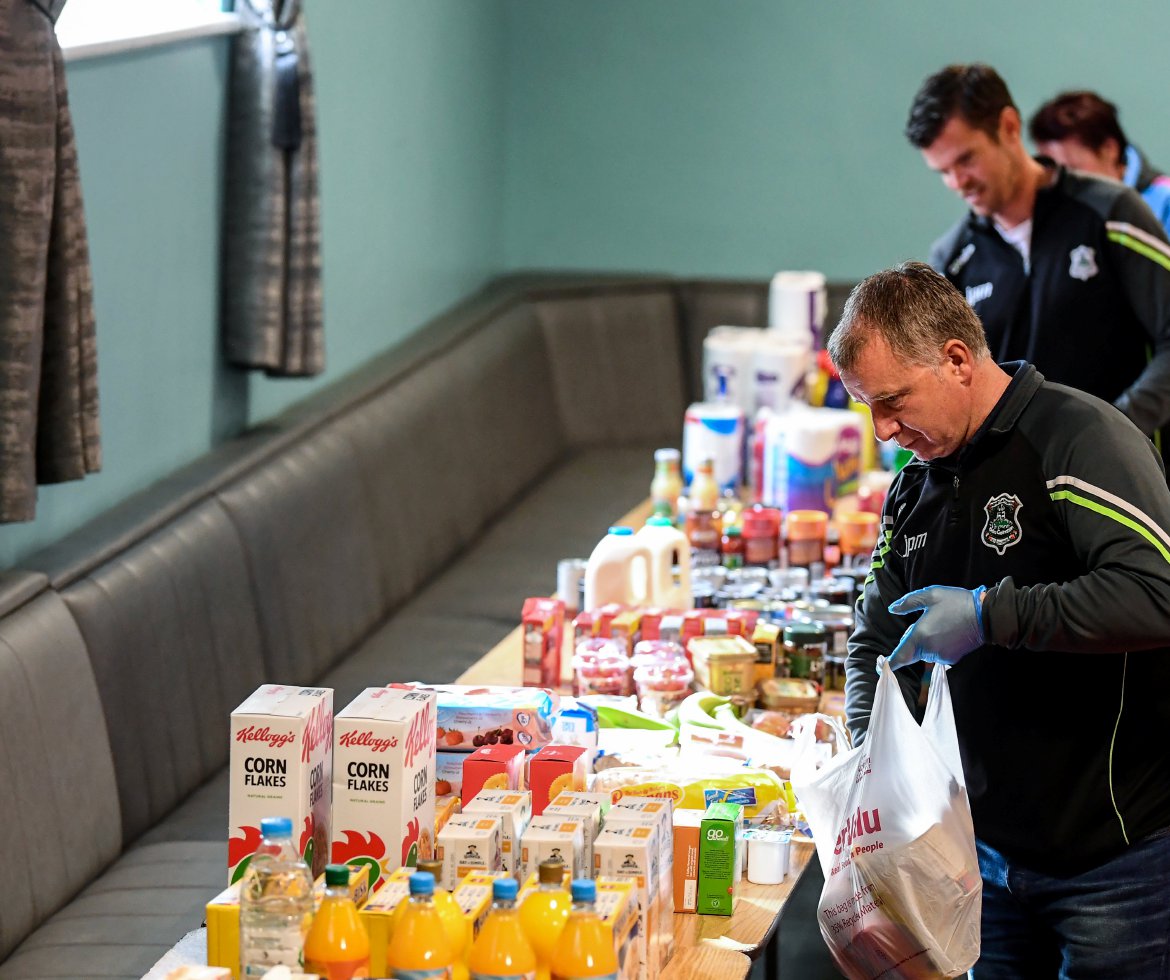 THIS IS IRELAND...Kieran McKeever helping out at his club’s food bank during last year’s lockdown

FACEBOOK was down for six hours this week, and it was the main item on every news bulletin around the world. The author Stephen King said it was “the definition of addiction.” Without the GAA, our world would be as boring as everyone else’s, even if modern punditry and managerial interviews are on a par with standing up in public and reading from a dictionary. The funny thing is that the people who are paid to talk about the game nowadays are as dull as a Tory party conference, but the people who aren’t are great fun with it.

I was chatting with a Tyrone friend of mine from Drumragh last week about the final. He said “The problem with the Mayo team is that like the Mayo people, they are far too nice. If we had a curse in Tyrone, we would have smothered those pair of old boys long ago.” The Tories would call that “compassionate conservatism”.

I was in Desertmartin recently to do their juvenile prize giving. There isn’t a single catholic living in Desertmartin itself. The GAA community is at the foot of the Sperrins about four miles outside the town. Two excellent pitches. A terrific club house and all the rest, in a community with a population of 700 people. When I arrived, I got the grand tour from Pat Kidd and some of the other club elders. I asked Pat “Did you have much bother during the troubles?” He said, “Very little bother Joe, apart from the odd pipe bomb.”

Which reminded me of the one about the Ministry of Agriculture building on Dungiven Main Street. One of the ways Liam Hinphey stimulated hurling in the area when he arrived up from Kilkenny and married my aunt Mary K, was to bring legendary club teams from all over Ireland to the town, all through the troubles. In October 1971, Moneygall, James Stephens and a few other renowned senior teams had travelled to the town for a weekend tournament. After the first round of games on the Saturday, there was a big night of music and fun in the clubhouse. The place was packed. Eddie Keher was there. A fresh-faced Brian Cody was sipping his stout, enjoying the music and the craic. The fearsome Fan Larkin, Kilkenny’s legendary corner back, was holding court. At around midnight, a bomb went off on the Main Street, destroying the Ministry of Agriculture which was just behind the club. The walls of the clubhouse shook and the guests were showered with dust. My father, who was on the guitar, took the mic and asked one of the Hassons to go out and take a look. He appeared back in a minute later and said, “It’s alright Francie, it’s only the ministry of Agriculture.” Whereupon, to the shock of our southern visitors, who were sheltering under tables, the revelry resumed as though nothing had happened.

A few years ago – Fan, who still looks fantastic at 78 – was back in our clubhouse with Brian Cody. He told a crowd of us at the bar the story about himself and Galway’s Paraic Fahy. It was the 1975 League final. Fan – all 5’ 3” of him – was marking Fahy. You can still see the clip on YouTube. As Fahy wins possession, Fan welts him with the hurl across the middle a couple of times. In those days that was not thought of as a foul. However, the referee eventually awards Fahy a free and as he does so, Fan walks away with his back to him, and the disgruntled Galway man throws the sliothar at Fan. It misses the Kilkenny man and flies over his shoulder. Fan turns, enraged, marches towards Fahy and knocks him out with a single punch.

Me: Do you not think you overreacted slightly Fan? The sliothar didn’t even hit you.

Fan: It wasn’t the fact he threw the sliothar. (laughter)

Me: Did he say something?

Fan: I’d rather not say.

Me: Go on, you’re among friends here.

Fan: He called me…. ‘a fucking leprechaun’ (the bar explodes)

The St James club in Aldergrove had the odd bit of bother themselves over the years, which is why they have a heavy steel front door as the entrance to their club rooms. On Saturday, my under 20s were down to play them in the championship. I was standing chatting with their manager at the steel door, when it swung open in the wind and nearly took the head off me, knocking me to the ground. The blood came gushing out like a Tarantino movie. Luckily, their first aid man, a paramedic, had come down to replenish the first aid cabinet in the club and stitched me up there and then, in time for me to take the warm-up. On Sunday morning I got a text from him “Joe, just checking how your head wound is? Are you feeling drowsy at all?”

As Dungiven club chairman and footballing legend Kieran McKeever said to me once when we were sipping pints in the club bar after a senior game, “Brolly, this is the real Ireland.”